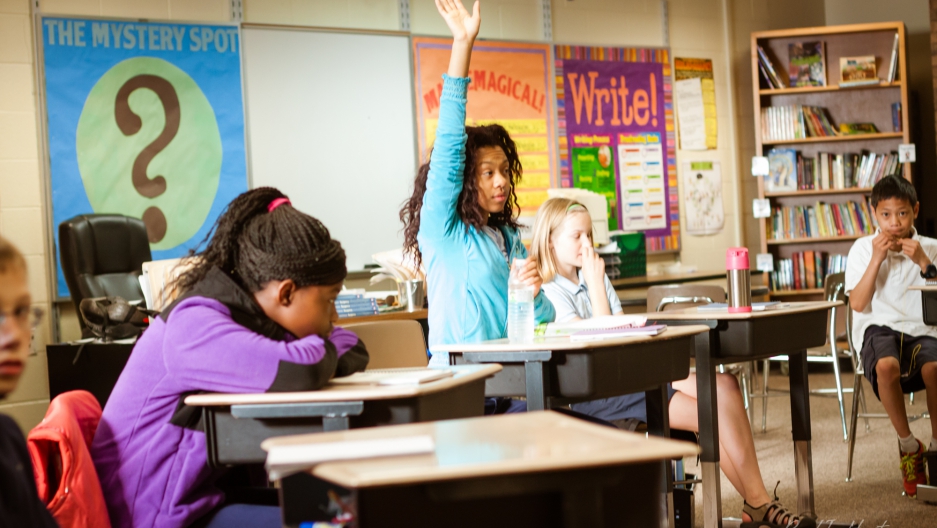 Since 2002, Massachusetts' Question 2 law has mandated that public school teachers shouldn't speak any language other than English for an extended period of time. Should this change?

How to best teach children who do not speak English as a first language has long been a debate in Massachusetts, especially since a ballot measure known as Question 2 curtailed bilingual education in the state in 2002.

The law mandated that public school teachers should not speak any language other than English in their classrooms for extended periods of time. Ever since, opponents of the measure have fought it and, now, for the first time, a bill is before lawmakers that might change it.

Massachusetts lawmakers are in a last minute scramble to get bills passed before the session ends in July, but State Representative Jeffrey Sánchez of Jamaica Plain has worked for more than a decade on what he calls “The Look Bill” to modify the current English immersion law.

Global Nation Education's #DroppingIn series explores some of the challenges immigrant students face in the United States — and why many drop out at high rates.

“I felt that the premise for that [Question 2] law was incorrect and the data that we have shows that that initiative was absolutely wrong," Sánchez says. "We’ve gone through essentially a generation and a half of kids that have been underperforming in school districts across the state.”

English immersion essentially gives students a year to learn the language and Sánchez says it is not working.

“It’s difficult for these students to learn the language that quickly," he says. "This bill would allow for districts to come up with their own district plans to take into consideration the intricacies and the dynamics of the populations.”

Rosalie Porter, a former Massachusetts teacher who was one of three people who co-chaired the 2002 campaign called “English For The Children," says the current law works and that the new proposed bill is a mistake. Reversing the current law, she says, would create chaos.

“We had had bilingual education programs for 30 years," she says. "I taught Spanish, English. At first, I thought it was a good idea, but quickly learned it didn’t help the children. It's segregated them by language and ethnicity.”

Sánchez disagrees and feels that English language learners suffer under the current law.

“The dropout rate for this group is three times what is would be for regular students," he says.

More data: How to keep immigrant and first-generation students 'dropping in' instead of dropping out

Miren Uriarte, a former professor and education policy researcher at the University of Massachusetts at Boston, says studies show that a one-size-fits-all approach to bilingual education doesn’t work.

“Over time, everybody has realized that it's way too narrow to have one type of instruction," says Uriarte. "It forces students to really learn content — not English — but math, biology, or social sciences in English, rather than in their own language. They begin to fall behind.”

Uriarte says the new bill will give educators breathing room. The proposed law would allow for different kinds of programs to be created.

"I think in Boston alone there are 70 languages within the schools," she says.

The bill is now with Massachusetts lawmakers and the end of the legislative session is July 31. California, which has the highest number of English learners in the country, passed a similar English immersion law in 1998 but repealed it in 2014. Arizona Proposition 203, passed in 2000, requires public schools to use English immersion programs as well.