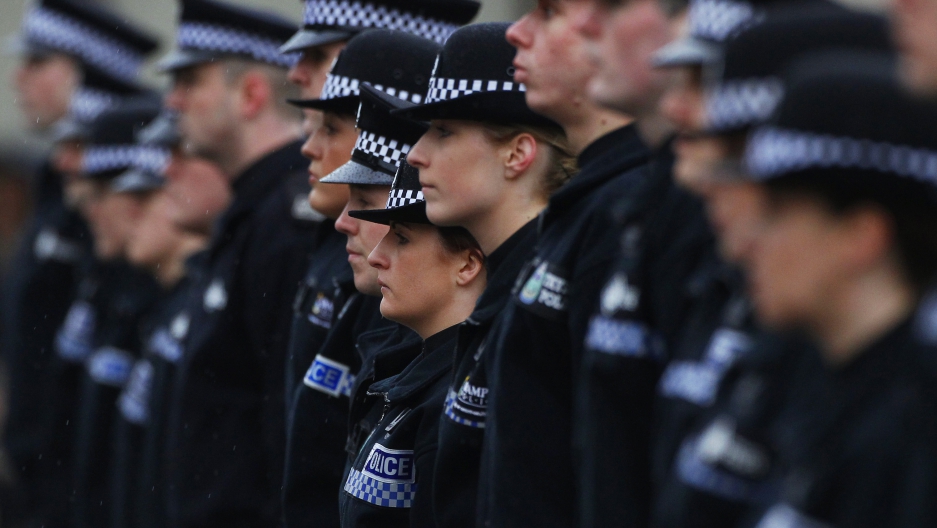 Police recruits stand to attention during their passing out parade at the Scottish Police College in Tulliallan, Scotland March 8, 2013.

A first move may be to take off the hat.

That's one effort to de-escalate a situation when you're a police officer in Scotland and you don't carry a firearm.

To law enforcement veterans from abroad, questions arise when they learn that many of Scottish officers work without guns. “As I was talking to one of the officers," says Chuck Wexler, the executive director of the Washington-based Police Executive Research Forum, “it hit me like a ton of bricks that well, if they don’t carry firearms, how do they deal with similar situations?"

Police officers there constantly deal with very dangerous situations. On a trip to Scotland, Wexler himself rode along on police patrols and witnessed cases involving people who were heavily intoxicated or mentally ill.

But in Scotland, police officers are trained to do things differently.

“They start at a lower level in terms of use of force,” Wexler says. “They are talking, communicating, making eye contact, trying to humanize themselves.”

That's where the hat comes in. In some cases, Wexler says, the police officer takes off his or her hat in order to defuse the situation.

And it's only after they have tried communication and de-escalation that they go on to use more forceful means. They will use batons or pepper sprays.

Wexler points out that it's not as if the police in Scotland hasn't come under criticism. There have been issues with dealing with minority groups, for example.

Besides, he says, if the person is carrying a gun it will result in a completely different situation.

“That’s what makes policing in the United States very difficult. Quite frankly, once someone pulls out a gun the police officers have very few choices,” he says.

After his trip, Wexler and his team put out a publication about police training and use of force. He says a number of departments have taken on board the recommendations in that report. Others have yet to take them on. “That's the nature of change in policing,” Wexler says.

But he goes on to add that “every police department in this country is one incident away from really seeing their city and department being turned upside down.”

He thinks that going to Scotland opened up the eyes of a number of American police officials.

He hopes that the US continues to examine its own police training and take lessons from training in other parts of the world.