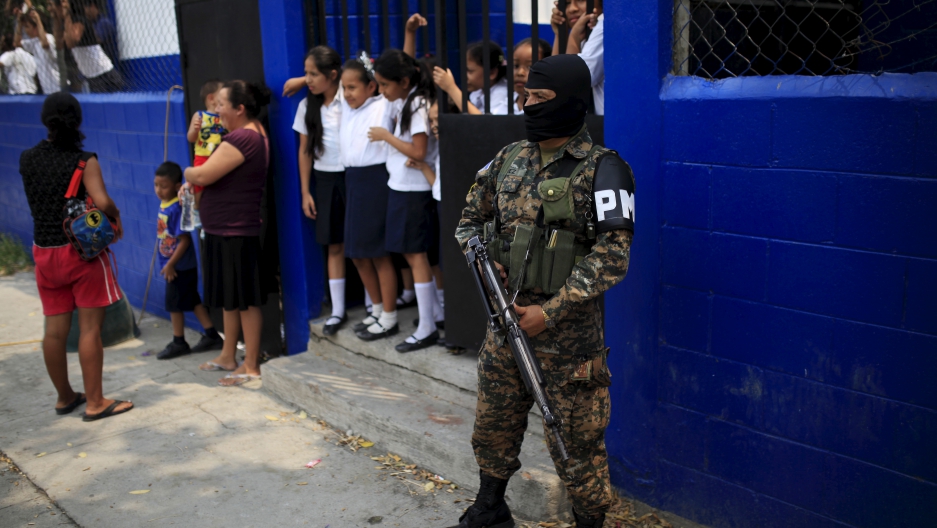 Salvadoran military police stand guard outside a school in Soyapango's La Campanera neighborhood on the outskirts of San Salvador.

Millions of Salvadorans, including many in the country's poorest neighborhoods, have cellphones.

But when those impoverished Salvadorans are victims of abuse at the hands of police, few dare to use their mobile devices to record the misconduct.

Salvadoran American youth advocate Susan Cruz asked young residents of the heavily policed San Salvador suburb of Soyapango if they would use their phones to document police wrongdoing.

"They said, 'Oh, we can't do that here, because the police will come up to us, take our cellphone and literally snatch them from our hands and look through them,'" Cruz recounts. "They'll just walk away with our phones, and they'll use pictures, they'll use our information that's on our cellphones against us. It's not like we feel safe taking video of the police because who are we going to give it to?"

Cruz describes a story one Soyapango resident told her about a local young man recently stopped by police.

"They took some money from his pocket and they took his cellphone. So he went to the local police station to file a complaint because he wanted his cellphone back and he wanted his money," Cruz says. "The police took him to the back, they beat him up and hit him in the head to the point where he was almost knocked unconscious, and they took photographs of him and they told him that if he followed through with the complaint that they knew where to find him."

Police in El Salvador have operated with added impunity since new rules went into effect last year ensuring that no officer will be investigated for shooting suspects in "self-defense."

Cruz says it won't be easy to challenge the implicit biases of the Salvadoran police force.

"You can't just send someone to a cultural sensitivity class and undo years and years of indoctrination. You can't erase their thoughts and feelings and values that they have a specific class, or a specific racial or ethnic group," Cruz notes. "They hold these strong beliefs about young people that live in poor communities. So they feel justified that they have to protect themselves."