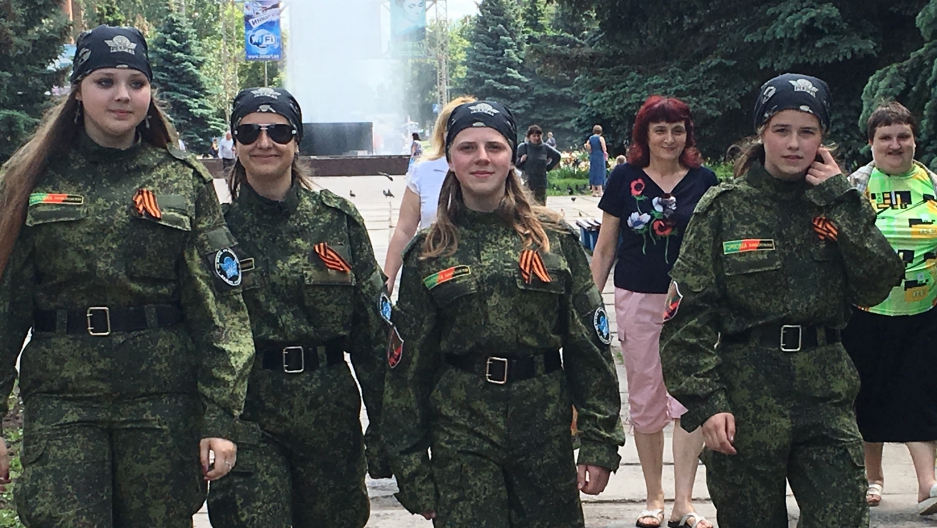 Soviet-style youth squads are making a comeback in Donetsk, a pro-Russian enclave in eastern Ukraine.

Teenage girls wearing Russian military uniforms spend Saturday afternoons taking apart and putting together Kalashnikovs. The average Russian soldier needs more than 10 seconds to break one down; 15-year-old Katerina, who declined to give her last name, takes just 9 seconds. With a blindfold on.

“Since I was little I preferred playing football with boys to playing with dolls,” said Katerina with a smile, before getting serious. “This is our history. … We remember our history. We remember who we are.”

They are young Ukrainians who want to separate from Ukraine and join Russia. They call themselves rebels, although Ukraine prefers "separatists." When she refers to history, Katerina is embracing Ukraine’s Soviet past — including reviving the Soviet tradition of cities creating youth squads.

“Since Soviet times, the military and patriotic education of school children was a priority,” says the teenagers' instructor, Sergey Fomchenko, “to cultivate love of school, motherland, and city.”

Donetsk is largely independent from Ukraine after two years of war, sparked in 2014 when hundreds of thousands of pro-European Ukrainians threw out a pro-Russian government. In response, pro-Russian residents along the Russian border in eastern Ukraine seized government buildings. Russian troops entered Donetsk and helped local fighters repel Ukrainian soldiers.

“Ukraine split into two parts,” Fomchenko says. “We loved our city and our region and kept loving it. The whole eastern Ukraine is closer [culturally] to Russia. That’s how it’s always been. … I would like us to be part of Russia.”

When the girls aren’t training, they’re proselytizing. They walk through Horlivka, a city of about 250,000, passing out Donetsk military recruiting fliers to fighting-age males — anyone between 18 and 55. The girls are guarded by local police officers wearing Russian uniforms.

“I can’t serve. I’m too young and we’re not in a state of martial law now, so there’s no mobilization of women. This is how I can make a contribution,” Katerina says, walking quickly with a stack of white pamphlets. “First and foremost, a man defends his motherland, his home, his family. And only then comes all the rest.”

But as this region separates from Ukraine ideologically, teenagers’ futures are becoming more uncertain. Most residents who could leave left long ago: the UN estimates the number to be well over 1 million. In Donetsk, there are no working banks, and the highest salary — $225 per month — is a soldier’s.

“The best option in terms of opportunities is to go abroad, for example to America or England, and find companies there,” says Alexandr Goryakin.

But that’s impossible — they’re landlocked in Donetsk. Because of checkpoints, the two 17 year olds can’t leave the self-styled republic to get Ukrainian passports. And their Donetsk IDs allow access only to Russia.

None of that matters to Katerina. Ukraine and Russia might have agreed Donetsk should eventually reintegrate into Ukraine, but she and almost everyone here rejects that, because of what she says this war has forced them to see.

“There was a shell in my apartment block. Everything was blown up. We were running away with my whole family,” she said. “When someone you know gets injured or killed, it’s very hard to keep going. When you just saw him, and two minutes later you’re told he is no longer there, it’s very hard.”

Sometimes it’s hard to remember that the girls are girls. Before we left, they wanted to show us one more thing. They giggled as one of the teenagers unfurled a flag with their logo: a red stiletto over an AK-47.

Reporting made possible by the Pulitzer Center on Crisis Reporting. Here's more by Nick Schifrin and Zach Fannin from the Donetsk People’s Republic from PBS NewsHour.