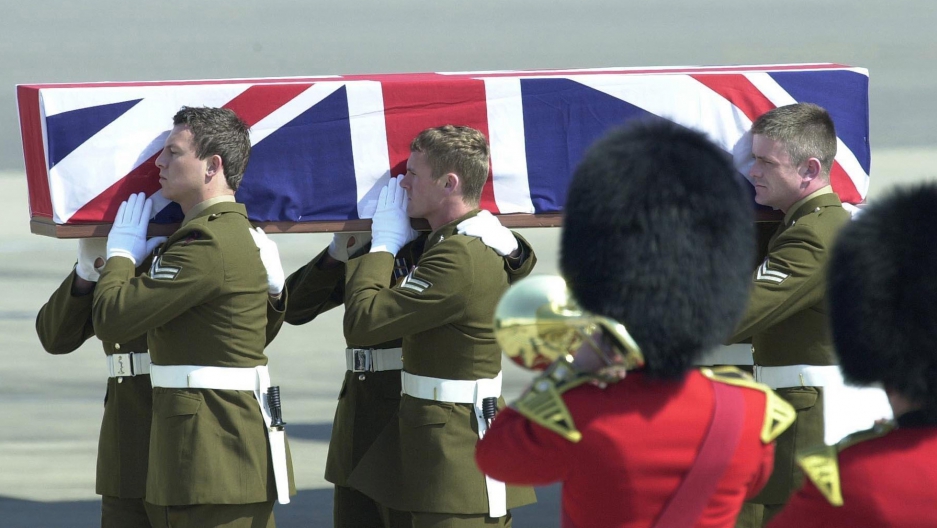 The coffin of Lance Corporal Shaun Brierley, of Britain's 212 Signal Squadron, who was killed on duty in the Gulf on March 30, is carried from a Boeing C-17 aircraft at RAF Brize Norton in Oxforshire, Britain, April 8, 2003.

It was the hardest, most momentous, most agonizing decision he made as British prime minister.

So said Tony Blair today about his decision to join the US-led invasion of Iraq in 2003.

"For that decision today, I accept full responsibility," he said. "Without exception and without excuse."

Blair's comments followed the release today of a British government report — seven years in the making. The Chilcot report, named for retired civil servant John Chilcot, who led it, is a devastating critique of the British government's intervention in Iraq. It called the preparation for war "wholly inadequate." And the justification for it "far from satisfactory."

Analysts say the report shows that the US and Britain didn't exhaust all channels before warfare. The families of those soldiers who died had their own critiques.

The former prime minister said today he stands by his decision to help the US topple Saddam Hussein. He also apologized for his mistakes.

Analysts blame both President George W. Bush and Blair. “By January of 2003,” says Steven Erlanger of the New York Times, “it was quite clear, even to the British, that Mr. Bush was about regime change, and that then it became an issue of trying to find the right legal reason to go to war. So they came up with weapons of mass destruction.”

Erlanger says the issue of WMDs, embraced by both leaders, was just a pretext, an unfounded one, for a war decided on long before.

Among those who can't forget — or forgive — are Christine and Peter Brierley. Their son Shaun was a lance corporal who died serving in Iraq in 2003. (That's his coffin being carried in the photo above.)

Christine Brierley does not mince words after hearing Blair's statement. "He's a liar," she says. "I don't believe a word he said. I don't believe he's as sorry as he says. They should never had done what they did. They should have never gone to war without the United Nations backing behind them."

The report doesn't go so far as to say the war in Iraq was illegal. But it does say pretty clearly the basis for the UK's decision was bogus. Yet the words do little for the mother of Shaun Brierley, who was 28 when he was killed. "I'm still very, very angry. I'll be angry forever," she says. "My son believed he was protecting us from Saddam Hussein and weapons of mass destruction."

Brierley says she considers Blair a war criminal. "He didn't wait for the UN to say yea or nay," she says. "Blair knew that they didn't have enough equipment. And it's just wrong. They should have never ever been there. He chose to send them."

Brierley's husband is also less than impressed with Blair's comments on Wednesday.

Brierley says Blair should be put on trial for war crimes.

“Every time he opens his mouth, [Blair] admits a war crime, because we’ve seen the legal advice for going to war and … you can’t go to war for regime change,” Brierley says.

When Blair talks about Saddam Hussein being an evil man, Brierley says he agrees with that. “But unfortunately, legally, you can’t remove [Saddam],” he adds.

Brierley says he and his wife are part of a group called Military Families Against the War, which is pursuing a legal case against Blair, and that information from the Chilcot inquiry might bolster their case.

“We will find something,” Brierley says. “It may well be not the war crimes court … but there must be something he’s done.”

Brierley says his son Shaun wanted to be a soldier since he was 2 years old. In school, he says his son joined the Combined Cadet Force, a military youth organization in Britain that's similar to the ROTC in the US.

After school, Shaun went to sign up with the Royal Air Force, but Brierley says they only wanted musicians and medics. So, Shaun decided to wait another year.

During that time, Shaun accompanied one of his hometown friends to the army recruiting office. “The sergeant behind the desk said, ‘Why don’t you have a go and join the Army? You’re a big lad.’”

Brierley says Shaun decided to fill out the paperwork. “And sadly, Shaun was actually successful and got in the Army. His friend had perforated ear drum and couldn’t get in.”

It’s been 13 years since Shaun was killed in action in Iraq. “I still see the lad and his family,” Shaun's father says. “They still come up to me now and say, ‘We’re really sorry about what happened with Shaun.’”

But Brierley says his son’s friend is not to blame for anything. “Shaun knew what he were doing. Shaun chose to do all that,” he says.

Before he was killed in 2003, Shaun Brierley justified his involvement in the war this way. He told his mother he was going to war to protect his family and country from Hussein and his weapons of mass destruction.

“He said, ‘Mum, I’m going to go over there and I’m going to get Saddam’s mustache and I’ll send it home to you in a letter,’” Christine Brierley says.

Christopher Woolf of PRI's The World contributed to this report.