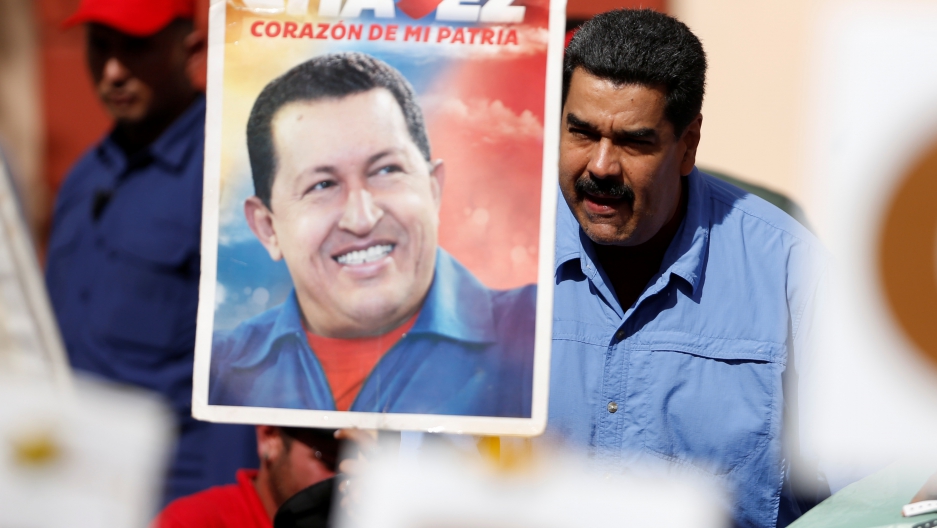 Venezuela's President Nicolas Maduro greets supporters next to a placard with an image of Venezuela's late President Hugo Chavez, at Miraflores Palace in Caracas, Venezuela May 24, 2016.

Not too long ago Venezuela was an oil-rich nation, with a seemingly bright future filled with economic prospects and great potential for growth.

This is no longer the case.

Now Venezuela has an 180 percent inflation rate — and there are shortages of food, basic goods and power.

Tulane University professor David Smilde lives in Caracas, where he also works with the Washington Office on Latin America, an NGO. He believes the immediate cause of the current crisis in Venezuela is the decline in oil prices. But he says at least 10 years of economic mismanagement are to blame, too.

“Nicolas Maduro inherited a set of policies from Hugo Chávez that were created during the good times. These were policies that were completely unsustainable, they were based on continual growth of income from oil,” Smilde said. 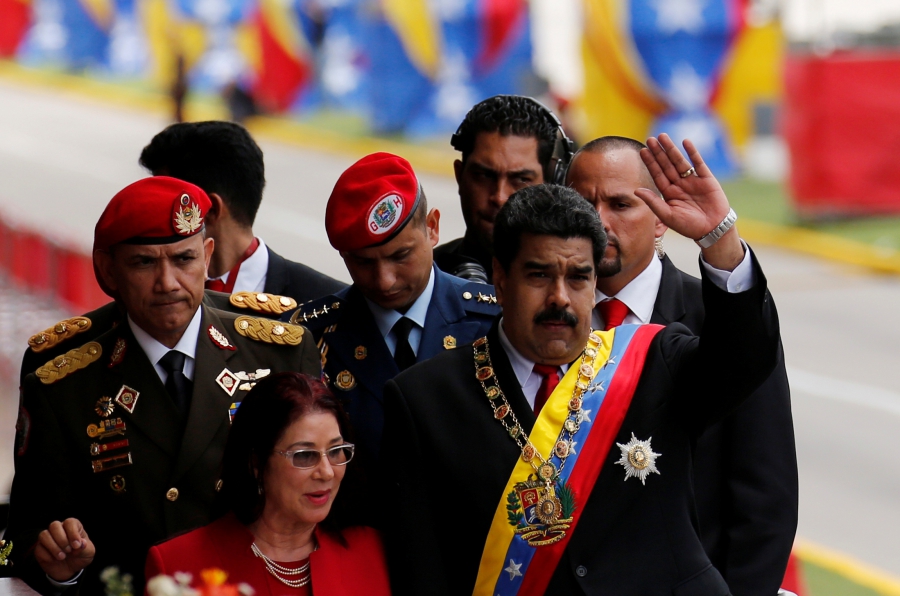 Venezuela's President Nicolas Maduro waves to the media next to his wife Cilia Flores after the military parade to celebrate the 205th anniversary of Venezuela's independence in Caracas, Venezuela July 5, 2016.

According to Smilde, when oil prices were high in the early 2000s the national revenue was mismanaged through the so-called "Bolivarian missions," a series of government-funded social programs which Chávez started and Maduro has continued.

The Bolivarian missions included anti-poverty initiatives, the construction of free medical clinics, educational campaigns, and the enactment of food and housing subsidies. Critics have called these initiatives irresponsible handouts that didn’t account for potential recessions.

“Now oil revenues have dropped and Venezuela has very little productive capacity, so it can’t produce its own food really and it doesn’t have enough money to import what it needs,” Smilde said.

Venezuela is also suffering because it lacks economic diversity. During the years when oil prices were high, the country relied on oil revenues and imported most of its food. Declining oil prices took down the nation’s economy as a whole.

Venezuela has also accumulated large debt, which is making it even more difficult for the country to climb out of the current crisis.

So far the government has been "making sure to pay its foreign creditors but it has really been reducing the number of dollars that are assigned to importing food and other basic goods. People are really suffering,” Smilde said. 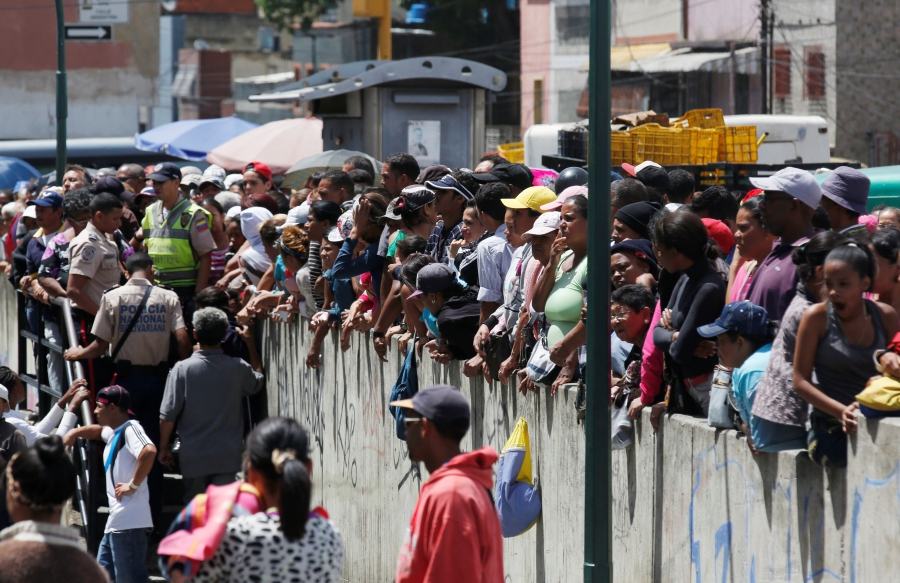 People gather to buy food and other staple goods outside a supermarket in Caracas, Venezuela June 30, 2016.

People are standing in lines for hours just to buy food at the grocery store. Others go to the streets and protest, carrying signs demanding food. "Bachaqueros," nicknamed for carpenter ants which carry big loads on their backs, sell black-market goods to fill the void and turn a profit.

They may be making the crisis more tolerable, but the government doesn’t approve of them.

“The government sees this as sabotage,” Smilde said, “sees these people as traitors and so it has tried to clamp down on this bachaquerismo.”

Instead the Venezuelan government has promoted committees on local production and supply that are charged with taking bags of food directly to people. However, the system is incredibly inefficient. 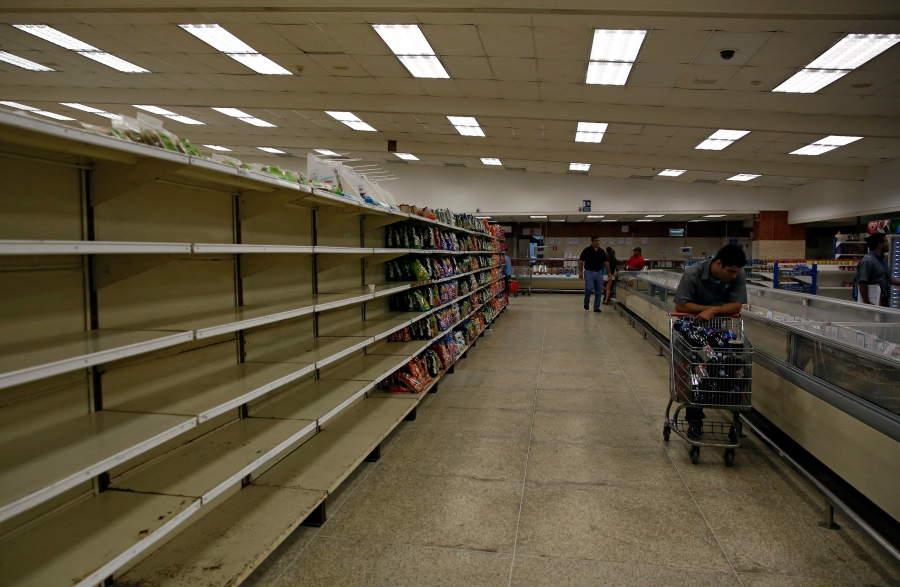 People buy food and other staple goods inside a supermarket in Caracas, Venezuela June 30, 2016.

“The real problem is that there’s just not enough food,” Smilde said. "It’s not a distribution problem, it’s a production problem."

And Smilde says the committees makes supermarket lines worse by pulling merchandise from their shelves. Looting is becoming an increasing threat. Since May there have been an average of 10 lootings a day.

Smilde is fortunate to be able to visit the United States frequently, where he can pack suitcases full of goods to live on. Most Venezuelans do not have that luxury.

“My heart really goes out to them and it’s one of the reasons that keeps me working on this issue,” Smilde said. “There’s not a night that I don’t think about this: ‘What’s going to happen in the next six months?’ Because things are really ugly right now, but they can get significantly worse.”