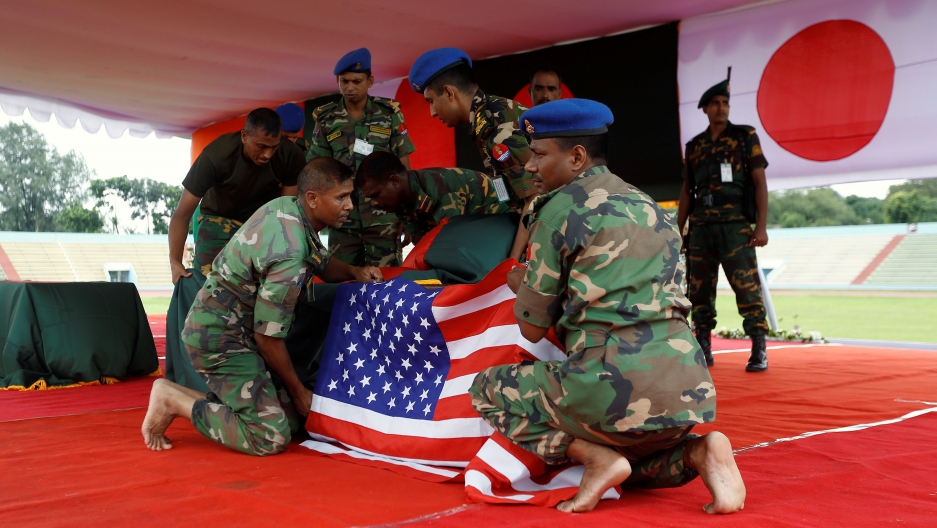 Bangladeshi army personnel place a US flag on a coffin of a victim who was killed in the attack on the Holey Artisan Bakery and the O'Kitchen Restaurant, during a memorial ceremony in Dhaka, Bangladesh, on Monday.

It has been a bloody month. Major terrorist attacks accross the globe have killed hundreds in Orlando, Istanbul, Dhaka and Baghdad.

The Bangladesh attack stands out, in part for its assailants.

On Friday, half a dozen young men in their late teens and early 20s stormed a cafe in Dhaka's diplomatic zone, where they held the people inside hostage for 12 hours. They butchered 20 patrons — most of them foreign nationals — before they were killed by police forces. The attack was the biggest Bangladesh has seen in a long time.

But here is where it gets shocking for many observers: The attackers, who have not been publicly named, were reportedly members of Bangladesh's elite. Most of them are said to have attended prestigious English-language private schools, and gone to universities in the country and abroad. They were the sons of educated parents, businessmen and even one politician.

Zafar Sobhan is the editor of the Dhaka Tribune. He says that Bangladeshis are shocked as more information is revealed about the suspected attackers and their backgrounds.

A common narrative — that poverty and lack of education are roots of radicalization — no longer seems to tell the whole story.

"This is something we have never seen before in Bangladesh. First an attack of this magnitude is unprecedented, though there have been lesser isolated incidents. And the typical narrative here is that these kinds of crimes are commited by madrassa kids — religious schools — attended by the poorest of the poor who are easy meat to be brainwashed and co-opted by terrorists and militants," Sobhan says.

This represents a new kind of threat for Bangladesh, and it brings up a lot of questions.

"This phenomenon has been seen elswhere in the world. Oftentimes educated kids have left the UK and Europe to go fight in Syria. But what we have to come to terms now as a country is that the problem is far more complex than we thought. It makes us have to look very closely at what the motivations of these kids might be and how this could have happened."

Unlike the attack at Istanbul's main airport, ISIS wasted no time in claiming responsibility for the siege in Dhaka. The group even posted photographs of the alleged attackers smiling and holding weapons.

The Bangladeshi government disputes the group's claim, however, saying the attackers belonged to a local militant group. But the families of the alleged attackers had been in close touch with the police as their sons went missing in individual incidents over recent months. Reports say most of them suspected that their children had been recruited by ISIS.

Sobhan says the government is staunchly in denial about transnational links to any terrorism in Bangladesh. "We had hoped that with this latest attack, where the connections are so clear that it would not have been possible for them to continue denying, it would have jolted the government out of its complacency. Unfortunately, that has not happened," he says.

Sobhan says that two weeks before the Dhaka attack, the government had undertaken an "anti-militancy drive" in which they arrested 14,000 people. "But critics in Bangladesh pointed out that many of the arrested were political opponents or common criminals, and not militants at all."

"If you're going around arresting 14,000 people in a massive sweep but you leave out the six people who then go around and commit an atrocity like what happened on July 1, the question that comes to mind is what exactly is the government doing?" Sobhan says. "The implication being that they don't have a handle on the situation at all, which makes future attacks very likely."