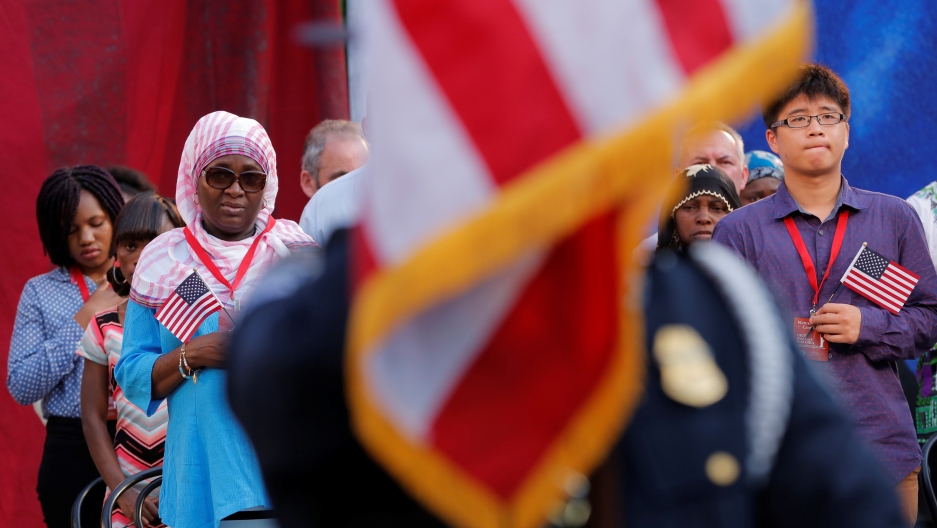 Candidates for citizenship in the United States listen to the Star Spangled Banner during a naturalization ceremony in New York's Central Park, June 20, 2016.

For much of US history, citizenship eluded many Americans. And while many still seek citizenship, the number of new citizens is impressive.

More than 7,000 people will become American citizens before the end of this Fourth of July weekend. Like the cook outs, the parades and the fireworks, it’s become an annual tradition — every year, the United States Citizenship and Immigration Services marks the anniversary of American independence with naturalization ceremonies across the country at the nation’s most storied historic landmarks.

Yet the country’s first law regulating the naturalization of foreign-born Americans, the Naturalization Act of 1790, established a precedent that would have made it impossible for most of today’s immigrants to become American citizens.

In order for someone to apply for citizenship under the Naturalization Act of 1790, they needed to have lived in the country for at least two years. They also had to be “a free white person,” and prove they had “behaved as a man of good moral character” — still a standard of today’s naturalization law, a distinction that continues to raise questions for immigrants and lawyers alike.

The Declaration of Independence pronounced that “all men are created equal.” But many of them, including Native Americans, free African Americans, slaves, indentured servants, and Asians, weren’t “equal” enough to become American citizens under the Naturalization Act of 1790.

Naturalization laws have changed many times over the course of American history. On this 240th celebration of American independence, find a summary of those changes below.

Congress revised the Naturalization Act of 1790 several times in the late eighteenth and early nineteenth centuries. The most significant changes were to the length of time an immigrant needed to live in the United States before applying for citizenship. Whereas the 1790 law required immigrants to have lived in the US for only two years before seeking citizenship, growing anti-immigrant sentiment manifested in a 1795 law that changed the residency requirement to five years. When the US faced war with France several years later in 1798, Congress passed the Alien and Sedition Acts. This suite of immigration laws permitted the imprisonment and deportation of immigrants, suppressed free speech among immigrants — and  spiked the minimum residency requirement for naturalization from five to 14 years.

The Naturalization Law of 1802 repealed the 1798 act’s 14-year residency requirement and reduced it to five years. Yet continued concern about immigration cemented naturalization as a subject of debate, culminating with the Know Nothings — an overtly anti-immigrant political party popular in the 1840s and 1850s — and their campaign to raise the residency requirement to a whopping 21 years.

1855: Women’s pathways to citizenship become tied to their husbands

Although the Naturalization Act of 1790 and subsequent laws were written in a way that suggested citizenship was only available to immigrant men, historian Marian L. Smith explains in an article for the US National Archives and Records Administration that gender was not a major factor — in theory, if not always in practice — in naturalization. An act of Congress passed on February 10, 1855, changed that. Under this new law — a relic of the legal concept of coverture, which mandated that a woman’s legal status was subsumed under that of her husband’s — a woman who married a native born or naturalized American citizen automatically became a citizen of the United States, too.

Though the 1855 act formalized a pathway to citizenship for immigrant women, the foundational limitation of citizenship — that only a “free white person” could become a citizen — meant that the 1855 law cemented the denial of citizenship to non-white and enslaved women.

Abolition and the end of the Civil War brought sweeping changes to the United States. The 14th Amendment, passed in 1868, formally extended American citizenship to people born in the US, including recently emancipated slaves. While the 14th Amendment marked a step forward for African Americans, the Naturalization Act of 1870 explicitly stated that naturalization was only extended to “aliens of African nativity and to persons of African descent.” Naturalization remained off-limits to all other groups of non-whites who wished to become citizens. 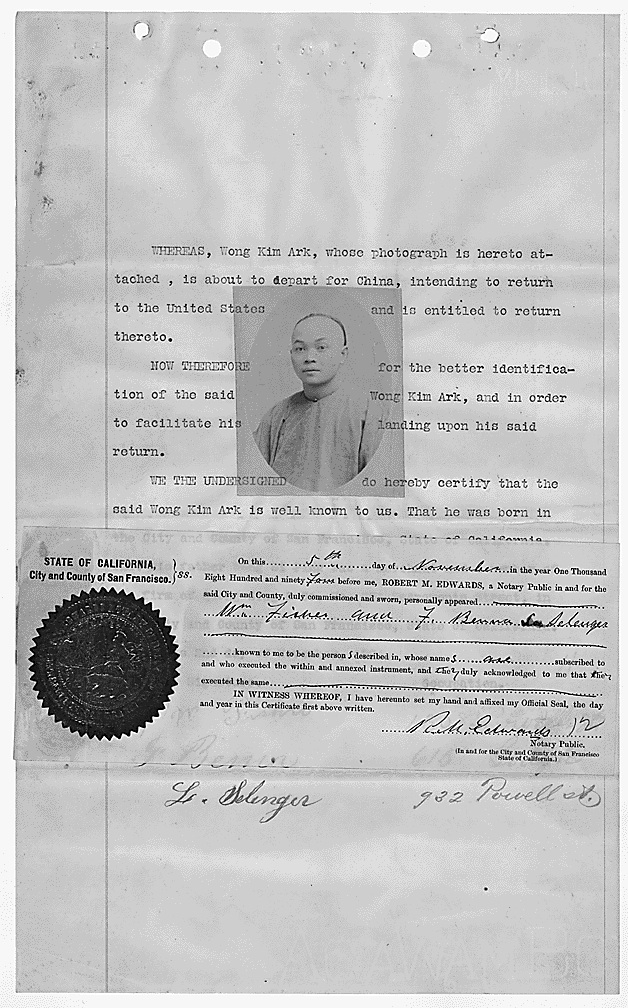 This sworn statement verified Wong Kim Ark's ability to freely travel to and from the United States, and was a key document in his case before the Supreme Court.

1898: A victory for children of immigrants born on American soil

The central principle of the 14th Amendment — that anyone born on US soil was automatically a citizen — was put to the test in the Supreme Court case Wong Kim Ark v. United States. Wong’s parents were non-citizens, but he was born in the US, making him a citizen under the 14th Amendment. Nevertheless, immigration officials tried to bar him from re-entering the country after he returned from visiting family in China.

He successfully challenged the federal government’s efforts to remove him from the US, his native country. The court’s decision in his favor was a boon not just for Chinese Americans born in the US, but for all American children of immigrants, regardless of their parents’ citizenship status.

See also: The Supreme Court ties in ruling on Obama’s plan to temporarily halt the deportations of undocumented parents of American citizens

1907-1923: Women’s citizenship can be revoked; Asians remain barred from naturalization

When the 19th Amendment gave women the right to vote in 1920, their citizenship status and political identity became less tethered to their husband’s.

The Cable Act of September 22, 1922 followed suit by repealing the Expatriation Act, with one major exception: female American citizens who married non-citizens of Asian descent could still be stripped of their citizenship. This distinction foreshadowed the November 13, 1922 decision in the Supreme Court case Ozawa v. United States, which ruled that Japanese immigrants were ineligible for American citizenship. The 1923 case United States v. Bhagat Singh Thind, meanwhile, ruled that immigrants from India were not considered white, and were not only barred from naturalization — but could also retroactively have their American citizenship revoked. 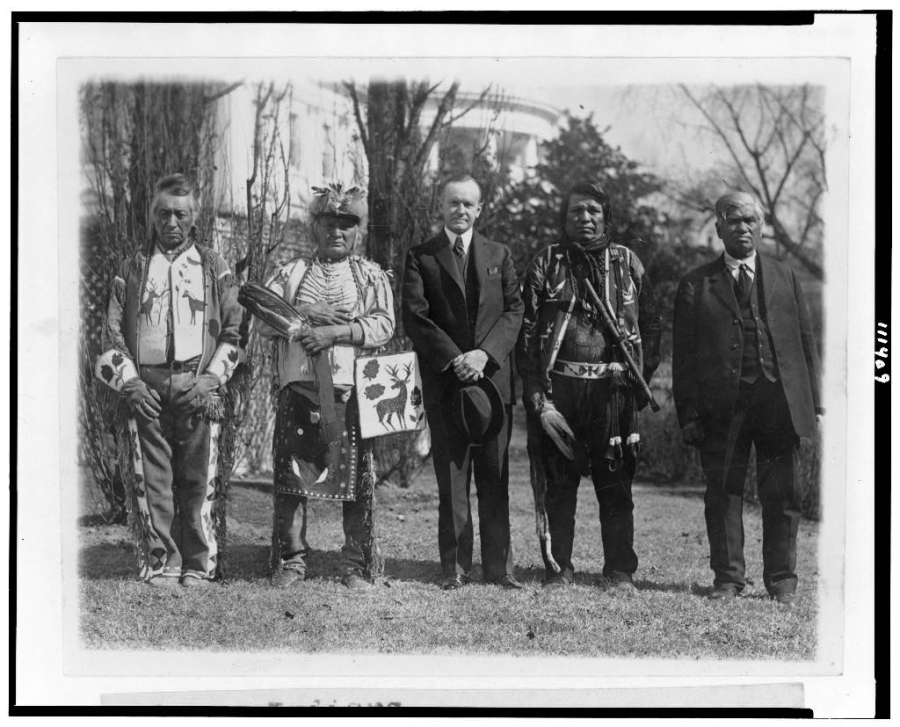 Congress recognized the service of Native Americans who fought with the United States Army in World War I by offering them American citizenship. On June 2, 1924, President Calvin Coolidge extended citizenship to all Native Americans when he approved the Indian Citizenship Act of 1924. Gaining American citizenship was not a clear-cut victory. Rather, the transition to becoming naturalized citizens was part of a much longer history of the US federal government’s attempts to coerce Native Americans into abandoning their sovereignty as native peoples and assimilate into American culture. Some states, meanwhile, reacted to the sudden federal citizenship of native peoples by restricting their access to voting.

After decades of outright exclusion, President Franklin Delano Roosevelt signed a law repealing the Chinese Exclusion Act on December 17, 1943. Edward Bing Kan — who entered the US as a student under his original name, Kan Kwong Bing, at the age of 13 — became the first Chinese American to become a naturalized citizen after the repeal. It was no coincidence — Kan had been working as an interpreter for the Immigration and Naturalization Service for 35 years.

1965: Civil rights propels the end of naturalization restrictions based on race and ethnicity 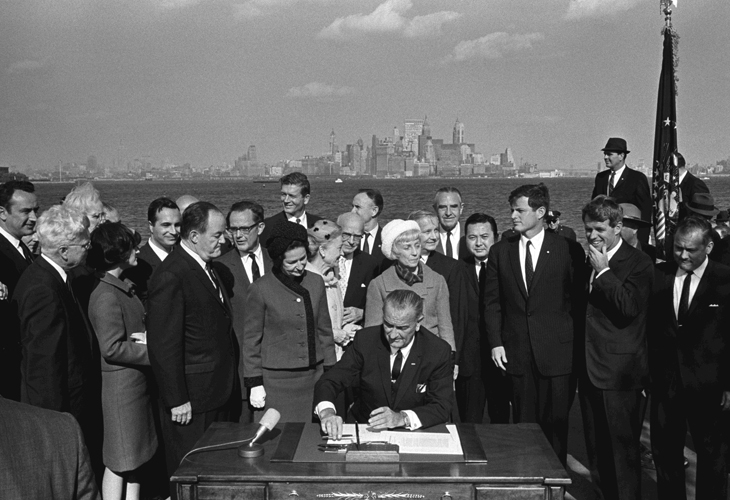 In the shadow of the Statue of Liberty and Ellis Island, President Lyndon B. Johnson signed the Immigration and Nationality Act into law on October 3, 1965.

Courtesy of the Lyndon B. Johnson Presidential Library, A1421-33a

The efforts of civil rights advocates and organizations who lobbied for humane immigration reforms influenced Congress to pass the Immigration and Nationality Act of 1965. This landmark legislation abolished annual quotas that restricted immigrant arrivals according to race and national origin.

Nearly 200 years after the Naturalization Act of 1790 limited naturalization to “free white persons,” the law facilitated the arrival and naturalization of immigrants from parts of the world that were previously limited or barred outright.