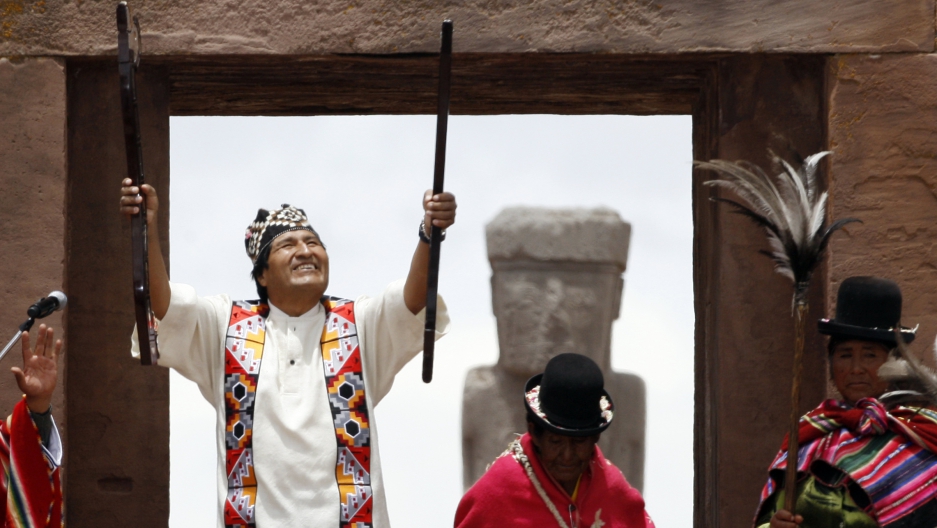 After being elected for a second term, Bolivian re-elect President Evo Morales, accompanied by indigenous leaders, holds the staff of command during an Aymara indigenous ceremony at the ancient Kalasasaya Palace at Tiwanaku, January 21, 2010. The Kalasasaya Palace is believed to be used to observe the location of the sun and influenced the Aymara calendar that President Morales has proposed for Bolivia.

The current year, 2016, is based on a Christian calendar, thus the meager 2,000-plus years. Bolivia's President Evo Morales says it's time for his country to adopt a calendar that's more culturally relevant to his people. And according to that calendar, it's the year 5524. 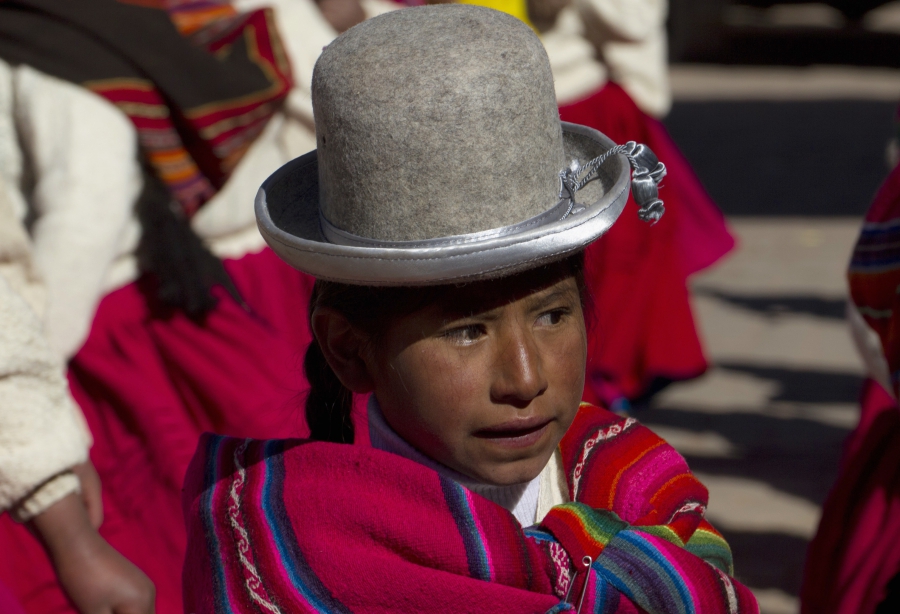 Evo Morales is Bolivia's first indigenous president and he's Aymara, which is the country's largest indigenous group, numbering about 2 million.

Paul Goldstein, an anthropologist at the University of California at San Diego, says Morales is basing his proposed calendar on the Tiwanaku civilization, the ancient ancestors of the Aymara.

"With Evo Morales, there's been a huge waive of popularity for things ancient, things Tiwanaku, things Aymara," Goldstein says. "It's a very big part of Bolivian nationalism, which we could call an almost archaeological nationalism."

Morales' calendar has 13 months, uses a beginning date of 1492 and adds 5,000 years before that, a somewhat arbitrary estimate of how long pre-Columbian people have lived in Bolivia.

"In a sense it's part and parcel of this sort of larger awakening of Aymara identity as a very important part of Bolivian nationalism," says Goldstein. "And this calendar sort of fits into this idea of setting themselves apart from the 500 years of oppression since the advent of Columbus, hence the 1492 year is a particularly telling part of this calendar."

Each month has 28 days. Morales says that makes it simpler than the Gregorian calendar, with its varied month lengths and leap year. But there's a larger goal. When Morales suggested the new calendar he denounced the Gregorian as a "colonial imposition" and said his country must "reclaim our ancestral calendar as part of the rebuilding of our identity." 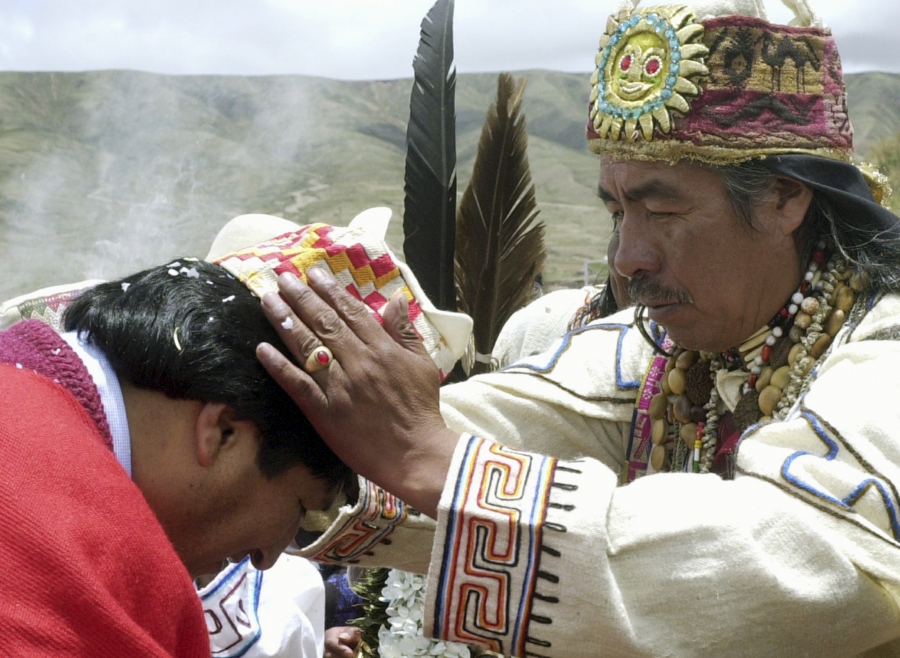 Bolivian President Evo Morales (L) is blessed by Aymara priest Valentin Mejillones during a ceremony at Tiawanaku, a pre-Columbian archaeological site about 40 miles west of La Paz, in 2006. The Aymara people, of which Morales is a member, are the descendants of the Tiwanaku whose civilization flourished from around 400 BC to AD 1000.

"You could call this a case of the invention of traditions," says Gary Urton, a Harvard University professor and specialist in pre-Columbian Andean cultures.

He's done extensive research at the ruins in Tiwanaku, a UNESCO heritage site about 40 miles west of Bolivia's capital La Paz. "Tiwanaku is the iconic site in Bolivia. It's the one celebrated by the people of the linguistic and ethnic group [Morales] belongs to, the Aymara. It's their homeland. Their mother culture."

Like the ancient Tiwanaku, Morales' calendar is based on the passage of the sun, a way to time harvests and plantings, a practice still used by modern Aymara, says Urton.

"If you go to an average Aymara village in the high Andes of Bolivia, they're still planting some of the same crops as their ancestors, like potatoes, other tuber crops and quinoa," Urton says. "They're speaking Aymara. They're using coca. They're sacrificing llamas."

Morales announced the idea of the Aymara calendar on South America's winter solstice, on June 21, the start of the Aymara New Year when a major celebration is held at the ruins of Tiwanaku. 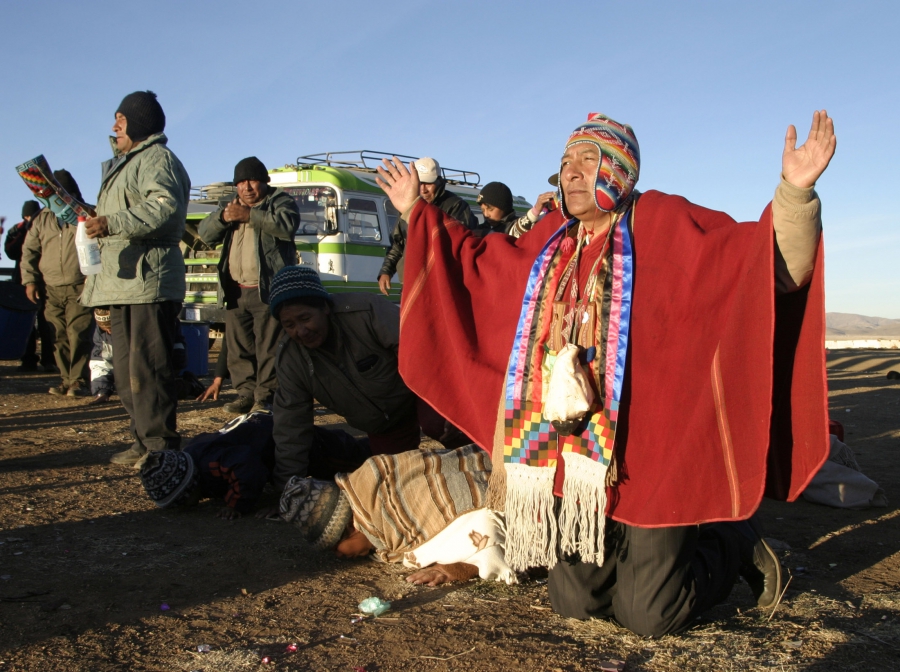 Bolivian Aymara indians receive the first rays from the sun during a traditional Aymara winter solstice ceremony in Taraca, south of La Paz. The ceremony, 2004, marked the year 5512 of the Aymara calendar.

Donna Yates is an archaeologist at the University of Glasgow who specializes in combating antiquities trafficking. She's studied the ruins at Tiwanaku.

"President Morales tends to use Tiwanaku as a sort of symbolic seat of power," she says. "It is a very emotional and evocative place for Bolivians, and the visuals it creates are meant to tie the political and social events there to a sense of ancient authenticity — to convey a direct line to the past. But President Morales isn't from Tiwanaku nor the Tiwanaku area. He ascended to power without Tiwanaku but has since incorporated Tiwanaku's symbolic power into this movement."

But Morales isn't the first Bolivian president to evoke culture for power.

"This isn't even close to the first time that a Bolivian political movement has done this," says Yates, "and it hasn't always been indigenous [leaders] that have done it."

"We really don't have that kind of dense evidence on the ground," he says, "largely because Tiwanaku was a non-writing civilization. So their communication to us over the thousand-year gap between when [they] largely ceased being a major civilization center is through art, monuments and other kinds of things that are readable, but not readable without any element of doubt."

Put simply, there's a bit of a gap between what archaeologists can prove about the Tiwanaku calendar from the ancient Aymara and what today's Aymara believe, live and enact on a daily basis. 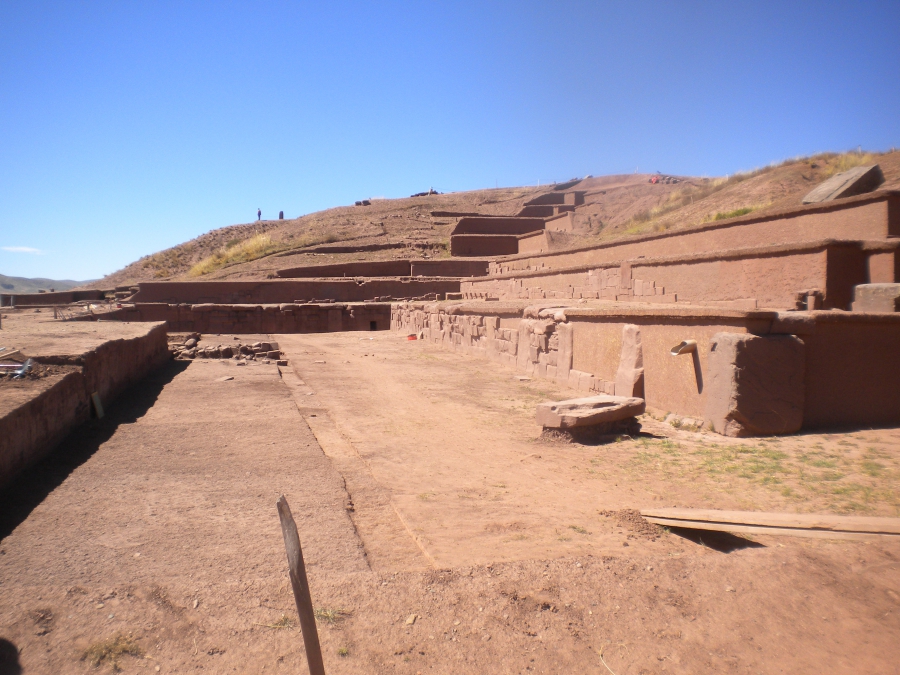 Some of the ruins at Tiwanaku in Bolivia, a UNESCO heritage site taken in 2010.

Goldstein's not sure it even matters. "The indigenous native American people of South America are majority populations in Bolivia, so authenticity is really what Aymara folks believe it to be and say it to be. They are the descendants of this very ancient tradition and as such their say on what the calendar is is quite plausible."

Morales was elected in 2005 on a wave of cultural Aymara nationalism. In 2009, a new constitution empowered Bolivia's majority indigenous population and it also changed the country's name from the "Republic of Bolivia" to the "Plurinational State of Bolivia" to recognize the multi-ethnic nature of the country, where Bolivia's indigenous peoples are a majority.

The new constitution also adopted the Wiphala, a multi-color flag representing indigenous peoples of the Andes, as Bolivia's second flag — making it the only sovereign country with two distinct national flags of equal status. 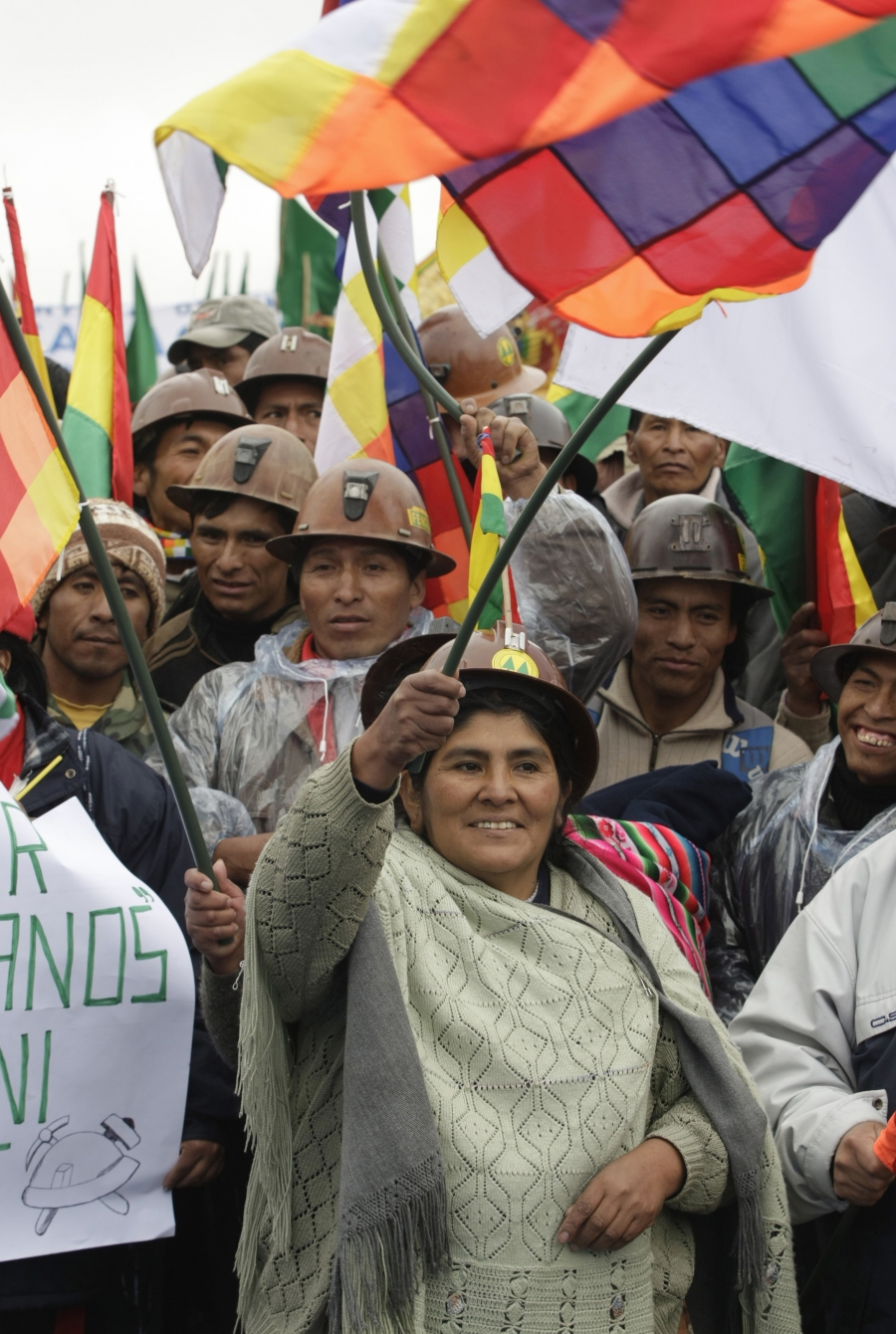 A Bolivian woman waves the Wiphala, the flag of native Andeans, while awaiting the arrival of President Evo Morales to enact the new constitution in a public gathering of thousands of his supporters, in El Alto on the outskirts of La Paz, February 7, 2009.

"The idea of ethnicities living together alongside one another while maintaining very proud identities is in fact one of the most ancient contributions of the Tiwanaku, the ancestors of the Aymara," says Goldstein. "So the idea of these two flags flying side by side is perfectly fitting for Bolivian sensibility and sense of identity."

Goldstein has been doing research in Bolivia for decades and he's noticed the effect of Morales' elevation of Aymara culture. "I can see a major difference in self-identity and self-awareness in the populations. Remember Bolivia is largely a country of indigenous stock. When we say pluri-ethnic or multi-ethnic, multi-ethnicity is actually a part of ancient Tiwanaku that can't be over-emphasized."

As for the proposed calendar, Goldstein thinks it's more a statement and a thought experiment, another way of celebrating and elevating difference, which is so important to Bolivia as a nation.

"He's not doing anything unique. Evo Morales is a guy who always likes to stick his finger in the eye of North Americans," says Urton. "He'll phrase it in a way that it's against Americans and Europeans. He is the first indigenous president of South America. He's always been intent on taking Bolivia back, in the Trumpian sense, to an ideal moment of unity."

In 2014, Morales famously changed the clock on the façade of the building housing the Bolivian congress. He reversed the hands to run counter-clockwise and reversed the hours too. Morales dubbed it the "clock of the South" and said it was a gesture toward Bolivia's heritage, but his tone also was a bit of a "so there!"

"Who says that the clock has to turn one way?" said Morales at the time. "Why do we always have to obey? Why can't we be creative?"

Goldstein considers it yet another thought experiment, to encourage self-expression and pride, but he says there is some cognitive science research about concepts of time in Aymara culture.

"In the Aymara language and gesture system, there's a tendency to consider the future to be behind oneself and the past in front, sort of the opposite of our assumption. So people gesture behind them when they're talking about the future." 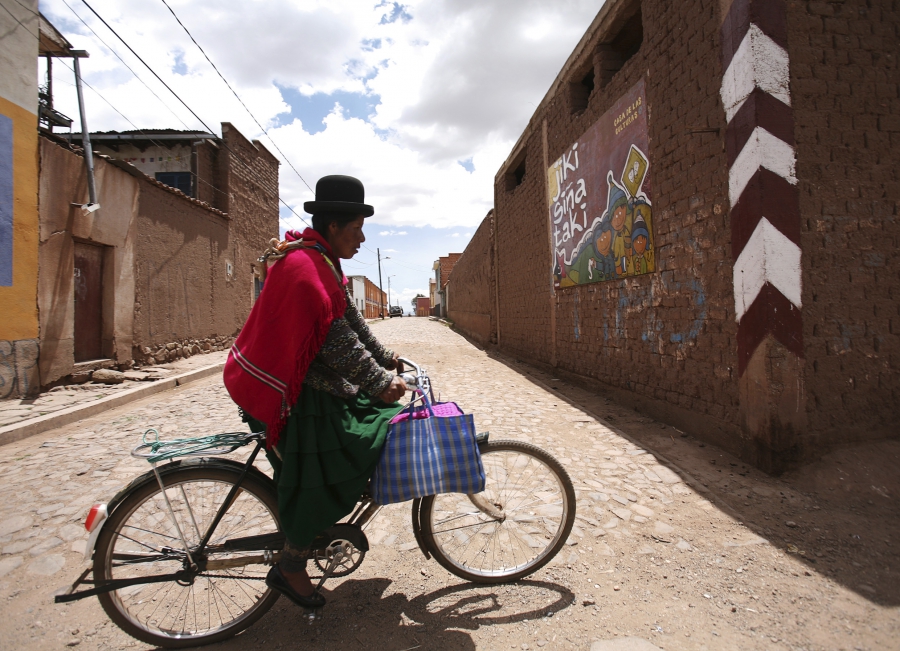 An Aymara woman rides her bicycle in Tiwanaku, a UNESCO world heritage site about 40 miles west of La Paz near the shores of Lake Titicaca, 2012.
Credit:

But there's a creeping strong-man element to Morales' championing of Aymara culture.

"He identifies as Aymara so by casting the ancient identity of Bolivia as Aymara he's saying 'That's me. I'm your guy!'" says Urton. But there are many identities in Bolivia, so to be truly multi-ethnic, other groups need to be celebrated too.

In that new constitution adopted in Bolivia in 2009, there was another important change. It scrapped the single term limit for the president, allowing Morales to run for a second term. He did and won. Then he ran for a third term and won again. But in February, Bolivians narrowly rejected a referendum that if passed would have allowed Morales to run for a fourth term. His current terms ends in 2019.