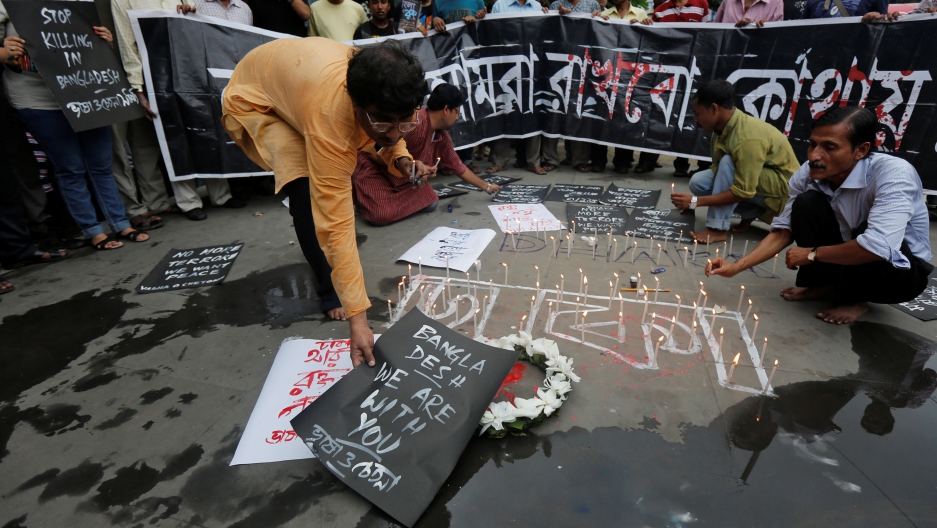 A vigil in Kolkata, India, shows solidarity with the victims of the attack at Holey Artisan restaurant in Dhaka, Bangladesh, July 2, 2016.
Credit: Rupak De Chowdhuri
Share

Twenty foreigners have been killed in an attack on a Western-style cafe in the Bangladesh capital Dhaka, with many hacked to death during the country's worst hostage crisis in recent memory.

Here's what we know so far:

Gunmen burst into the cafe in Dhaka's diplomatic quarter shortly before 9:30 pm on Friday night, as people were eating dinner.

They set off explosives, shouting "Allahu Akbar" (God is Greater).

As a massive firefight broke out with police, the gunmen took up to 40 hostages, including many foreigners. Two police officers died in the gunfight.

The assailants separated out the Bangladeshis from non-locals and led foreign diners upstairs, according to the father of one diner.

They murdered 20 hostages during the course of the siege, hacking many to death with machetes.

The siege ended with six gunmen killed and one arrested. Some 13 hostages were freed.

Where did it happen?

The Holey Artisan Bakery restaurant is a Western-style cafe popular for its large, leafy garden, situated in the affluent Gulshan district.

The diplomatic zone is home to many of the city's expatriate workers and several foreign missions, as well as restaurants, upmarket malls and members' clubs.

The incident took place near the city's Nordic Club and the Qatar embassy.

Who is behind the attack?

About four hours after the attack the Islamic State jihadist group claimed responsibility, via an IS-affiliated news agency, Amaq.

It later issued a number of photographs of what it said were scenes from inside the cafe showing what appeared to be several bodies lying in pools of blood.

The attackers were described by one army official as being aged 20-27 years old and "well-educated".

Who were the hostages?

The army said most of the slain civilians were either Italian or Japanese.

A Tokyo official said that several Japanese nationals were inside.

Sri Lanka said two of its nationals were among the hostages, but had been freed.

Is this kind of attack common?

The attack follows a spate of murders of foreigners, religious minorities and secular activists in Muslim-majority Bangladesh, blamed on or claimed by Islamist militants.

Cesare Tavella, an Italian aid worker, was shot dead in Gulshan last September in an attack claimed by Islamic State.

And in 2012 a Saudi Arabian diplomat was shot dead in the diplomatic zone.

However, Friday's attack was on a totally different scale and the first time that people had been held hostage.

The government and police deny that Islamic State is active in Bangladesh and blame homegrown militants for the killings.