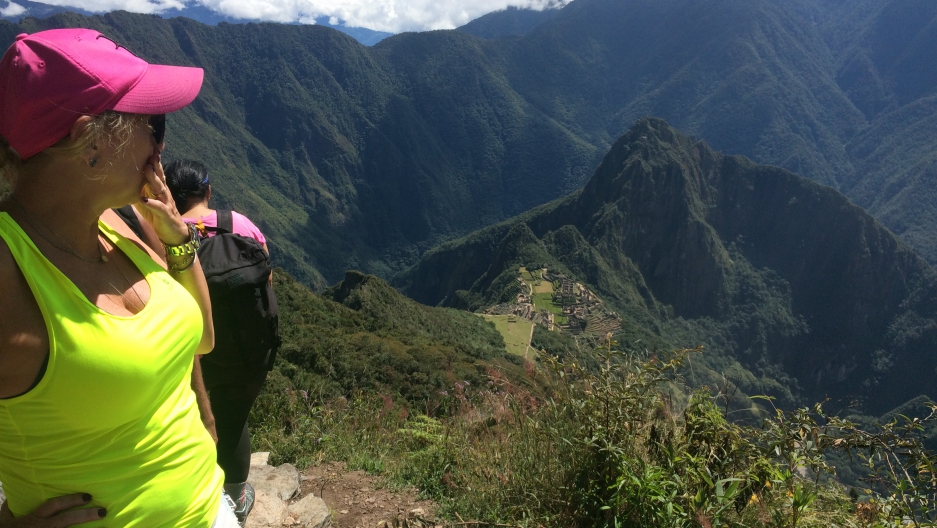 A tourist looks down at the Machu Picchu archeological site in Cuzco, Peru.

When I went to Machu Picchu this past May, I thought I would find a meditative place to sit alone and think about my ancestral past — never crossing paths with dudebros who pose in front of the Incas' sacred citadel for their Tinder profile pictures.

I thought this even though I knew they had to get those pictures somehow. The Machu Picchu selfie is such a cliché in dating app culture, I irrationally hated every man whose initial offer to me was a photo of himself making a strong-man pose before the place I've been taught to revere since before I could read. Swipe left.

I felt like these people didn't deserve to mark it as a notch on their belts, especially before I could go there. It wasn't fair because that place was not theirs, it was mine.

I'm the one who learned in grade school about the might of the Incas and the tragedy of their conquest by the Spanish. I was sure visiting this site meant a lot more to me than it ever could to them. 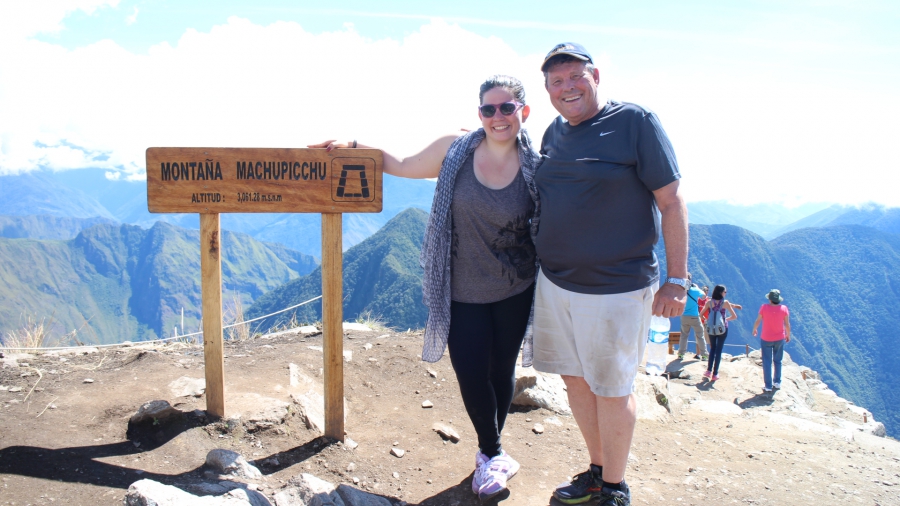 Three hours of steep inclines, and at the top I met this gentleman, who turned 63 the day I turned 27.

So off I went. Fifteen years after my family left Peru, I was making my pilgrimage, climbing the tallest mountain flanking Machu Picchu on my 27th birthday.

The Peruvian highlands are no joke. Even decades after Machu Picchu was named a UN World Heritage site, and tamed enough to allow the massive passage of tourists, people get lost and even die in its Sacred Valley. It's a rugged mountain range, the Andes, and the Incas' roads are steep and unforgiving.

But their blood is in me, right? I would be just fine because I belonged there. I thought.

To get to Machu Picchu, you have to go to Cuzco, an ancient city in its own right, packed with history and heritage and pride. And some people there thought I did not, in fact, belong.

"Where are you from?" a tour guide asked me in English, as I slouched in the back of the van to the Sacred Valley, wearing big shades and a hooded jacket.

"Lima," I said, clearly in Peruvian Spanish. The rest of the group laughed and the guide replied, now in Spanish, too, "Sorry, miss, your complexion just doesn't look made in Peru."

"No, señor, bien hecha en Peru," I told him. Something like, "Really, made in Peru."

How could he say that to me? I'm the most Peruvian person I know. When my family moved to Miami we must have been one of only a handful in our suburb. I talk so much about Peruvian things and being from Peru, it must be annoying for my friends and coworkers.

But he thought my skin color was too light. And even as I replied with my American-made snark, my heart sunk a little, because he was from Cuzco, and his ancestry was right.

I come from the children of those Spaniards who destroyed "our" Inca Empire. He, presumably, comes from a proud strain of Inca blood that managed to survive and rise up again after the conquest.

He wasn't the only one who thought I looked foreign. Throughout the rest of the trip, people kept thinking they could upcharge me, or speak to me in English, German, Portuguese even. And sure, I looked like a tourist, but it hurt like hell to think I was coming to the nest of my Peruvian heritage only to be treated like an outsider. A foreign outsider. 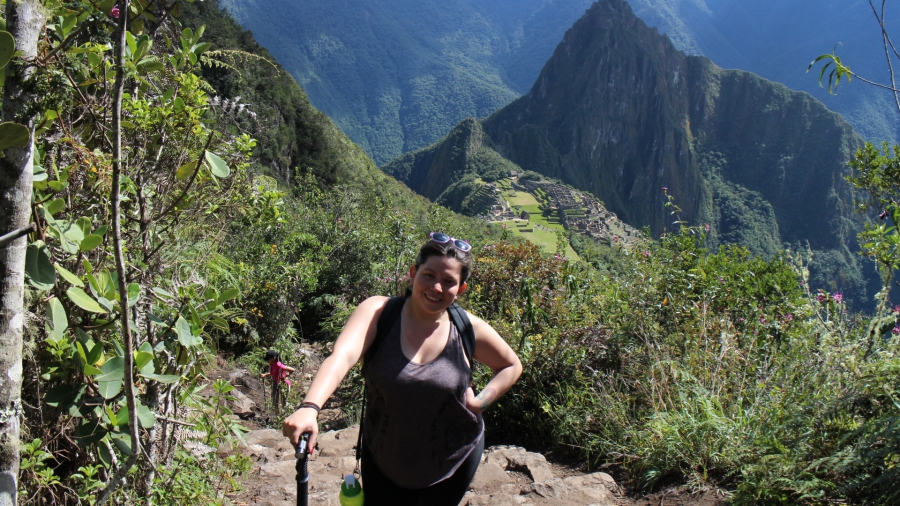 Posing, though not at the spot where all the bros gather.

Still, I started to accept it, because — children of immigrants, you understand this — every time I visit Peru, even in Lima, I do feel like I'm missing something. For all the Peruvian blood and memory coursing through me, there's as much United States attitude and culture informing my behavior and my understanding of the world.

So, pretty quickly I gave in to the idea that this tour guide, though maybe a little rude, had a real claim to this place, more real than mine.

When I got back to the States I called a Peruvian professor of Andean culture at the University of Pennsylvania. His name is Américo Mendoza Mori, and, bless him, one of the first things he told me is my Spanish sounds clearly Peruvian.

He also said it sounds clearly like the Spanish of Peruvians from Lima, but that my urban upbringing on Peru's coast doesn't diminish my connection to Inca culture. Mendoza Mori says after the conquest, Inca and creole traditions mixed to create what is Andean heritage today. And he says the Incas didn't even see themselves as sovereign only of the Andes.

"You might think, 'I'm from Lima. By claiming myself Andean, am I stealing something?' No you're not," he told me. "It's not just geography. Your Peruvian Spanish has a lot of Quechua [Inca language] words. ... Limeños represent 30 percent of Peru's population, and it would be very negative that one third of Peru's population, just because they're near the ocean, that they cannot claim Andean culture."

This helps my perspective now. I don't feel like a fraud anymore.

But while my pilgrimage was still going on, I was knocked off my high llama, so to speak.

By the time I got to Machu Picchu — a van and a train and a bus away from Cuzco — I was much less interested in giving side-eye to the posing dudebros. In fact, I was even patient (sort of) when their posing delayed mine for about 20 minutes. 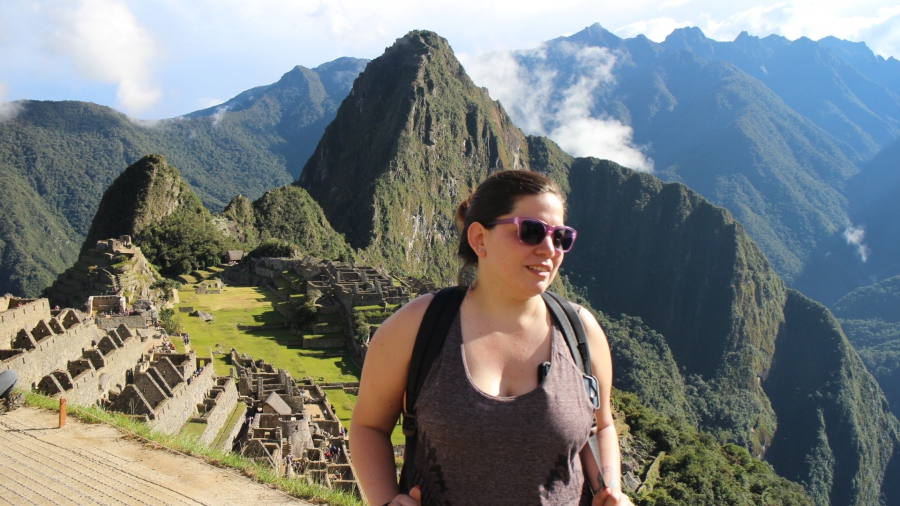 Maybe it's not a great shot, but it's the only one I have of myself without tourists blocking the rest of the view. Machu Picchu, Cuzco, Peru. May 2016.