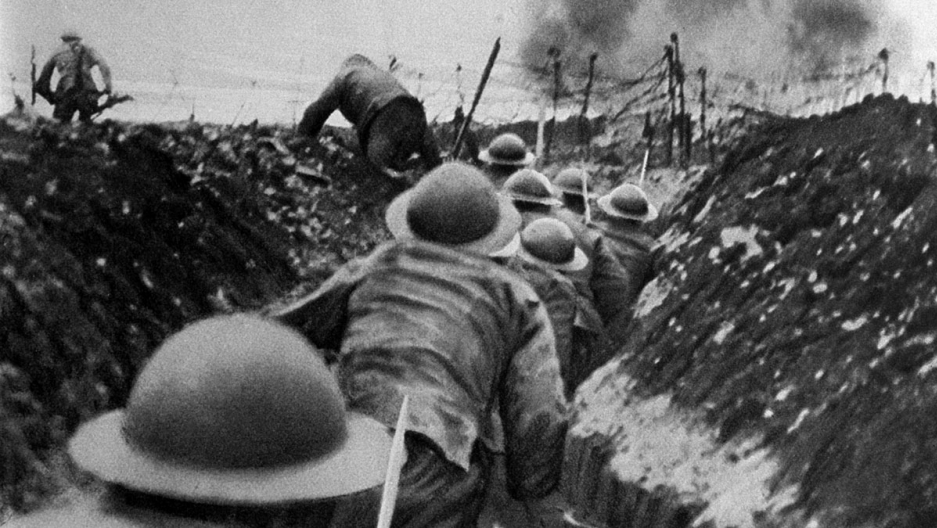 Soldiers begin leaving a trench during the battle of the Somme, 1916

It’s the bloodiest day in British military history; one of the deadliest days of all time.

The First Day of the Battle of the Somme.

“It was hell let loose, brother,” said one survivor, in an archive recording. “Hell let loose.”

At 7:28 a.m. on July 1, 1916, hundreds of whistles sounded, and the first troops climbed out of their trenches toward the German lines.

It was a disaster.

In many sectors, the attacking British soldiers were mowed down by machine guns before they’d gone a few yards.

Of the 140,000 British, Commonwealth and French troops who went "over the top" that day, almost 60,000 were killed, wounded or missing by the day’s end. Their enemies, the Germans, lost an estimated 7,000.

For perspective: about the same number of men landed on D-Day, in World War II, and they suffered an estimated 10,000 casualties.

World War I had started almost two years before the Battle of the Somme, in the summer of 1914, when German troops invaded Belgium, France and Russia. Britain created a new army from masses of civilian volunteers.

The Somme was the first big test of this new army. A great victory was expected, and tens of thousands of cavalrymen were stationed a few miles behind the lines, ready to exploit the anticipated breakthrough.

When the battle ended four-and-a-half months later, about a million men total were dead or wounded.

All that Britain and its allies had to show for this sacrifice was an advance of 5 or 6 miles in some areas.

In the 1960s and '70s, the British Imperial War Museum recorded the voices of survivors of the Somme.

"There was nothing but brown earth, shell holes, and death,” said one man. “Nothing else.”

“There was guns, rifles,” said another. “Everything was going off at the same time; and people shouting and hollering; and some poor beggars you could hear, who were wounded, were crying for help.”

“As soon as we got above the ridge, we were caught,” recalled one Scottish veteran. “That whole wood was lined with machine guns from [one] end to the other. The company went over 230 strong, and only 11 privates survived. It was ridiculous.”

The BBC has pictures of the Somme here. More footage can be found at War History Online.

There were many reasons for the disaster.

For a long time, it was assumed that military incompetence was simply to blame. Out-of-touch generals using out-of-date tactics. But starting in the 1980s, some historians came to the top officers' defense, saying they were doing the best they could on a steep learning curve after being suddenly confronted with war on an industrial scale.

That might sound plausible in the dusty halls of academia. But the evidence points to plenty of decisions being made that reflect poor judgement or a callous disregard for life.

Any infantryman, in almost any age, like this author, is trained in the principles of fire and maneuver. Establish a base of fire to cover any movement, especially when in contact with the enemy. If you can keep the enemy’s heads down, your guys are less likely to get hit as they move. The regular British army had long trained on this principle. But for the Battle of the Somme, British commanders deliberately chose to ignore it.

The British soldiers were simply ordered to walk forward. The top brass assumed the new volunteer soldiers lacked the training and discipline to fire and maneuver. They also hoped artillery would provide the covering fire, rather than small arms among the infantrymen.

Unfortunately, the artillery lifted too soon in most sectors, allowing the Germans to rush out of their bunkers to man their machine guns before the British could cross no-man’s land.

The artillery also failed in other respects. A week of bombardment had failed to destroy the German bunkers as hoped. The Brits may have fired a million shells, but most were anti-personnel shrapnel shells, rather than the high-explosives needed to destroy bunkers and fortifications.

The artillery didn't tear through most of the barbed wire in front of the German positions, either. Troops were caught struggling to cut the wire while being swept by the German machine guns.

And the British commander in chief, General Alexander Haig, was indeed out of touch with the situation. In his diary he noted that he wasn’t sure if one Army Corps had even left the trenches during that first fateful day. In fact, it had lost 14,000 men.

At the end of the second day of the battle, July 2, 1916, Haig wrote in his diary: “The AG [adjutant-general] reported that the total casualties are estimated at over 40,000 to date. This cannot be considered severe in view of the numbers exposed and the length of line attacked.” That number was a serious undercount. But even 40,000 constituted 30 percent of the men — that’s a loss that military theory says would render any unit “combat ineffective.” The actual loss for all 14 British divisions engaged on July 1 was about 42 percent. Some battalions lost over 90 percent.