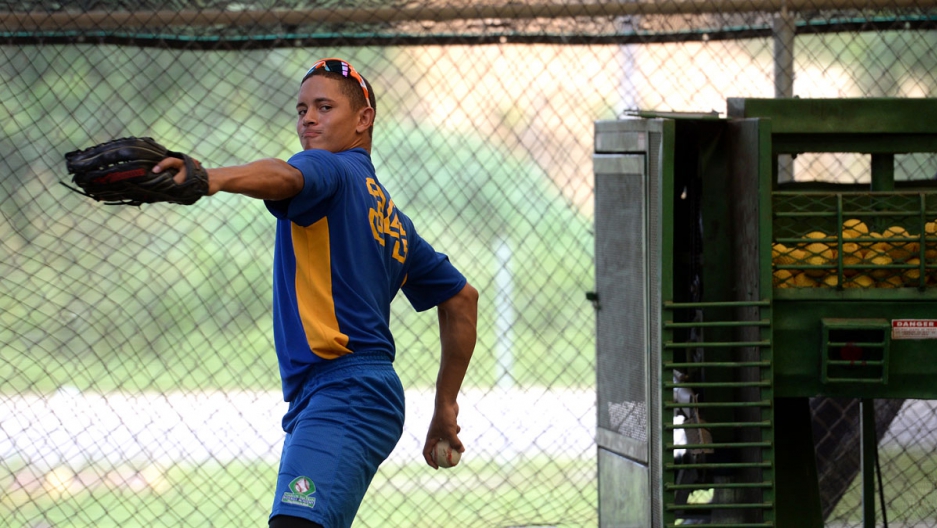 At the Carlos Beltran Baseball Academy in Puerto Rico, boys work out with shiny new equipment, weights and ropes. When they get sore, there are hot tubs to soak aching muscles — pretty different from how it was when Alex Diaz grew up.

“During the Monday to Friday, we just worked out with our parents, friends. Now, they have everything here,” said Diaz, who played eight seasons of Major League Baseball for various teams in the 1990s. “I got these facilities when I made it to the big leagues.”

Diaz now runs the athletic department at the Beltran Academy, one of five private baseball high schools in Puerto Rico.

“They practice baseball five days a week, they study five days a week. They have three meals down here, they got everything down here,” said Diaz. “If you want to be a baseball player, we’re going to give you all the tools you need.”

At the Beltran Academy, located in the rural town of Florida, boys focus on baseball for three hours each weekday. Baseball used to be the sport in Puerto Rico. Now, it competes with volleyball, boxing and basketball.

That last sport ... Diaz can’t make sense of that.

“Because in basketball you have to be 7 feet tall. It’s strange because Puerto Ricans, the tallest they can get is 6-3, 6-4,” said Diaz.

He has a point. Name a Puerto Rican NBA player. ... Exactly. There are only a handful, and no superstars.

Many Puerto Rican teens still do gravitate first to baseball. At the Beltran Academy, nearly 400 boys try out each year for a spot — roughly one in 10 makes it.

Manuel Castillo, who is entering his junior year, made the cut. He travels two-and-a-half hours each direction by bus to get to the academy. He leaves home at 3 a.m. each day, gets home around 7 p.m., studies for a few hours, then goes to bed at 10 p.m.

After high school, Castillo wants to go to college. Then, he said, God willing, he'll play in the Major Leagues.

Luis Virella takes a swing in the batting cage as Manuel Castillo waits his turn.

For teens like Castillo, baseball can be a way out of poverty. Roughly 45 percent of Puerto Ricans live below the poverty line. Carlos Beltrán — the namesake of the school — grew up nearby in the town of Manatí without much, either.

Those days are long gone. Beltrán now plays for the New York Yankees.

Beltrán is 39 and has been one of baseball’s best players over the past two decades. He’s picked up a truckload of honors, including the Roberto Clemente Award, given annually to one Major League player who exemplifies the best of sportsmanship and community involvement. Beltrán won that in 2013, two years after he started his academy. 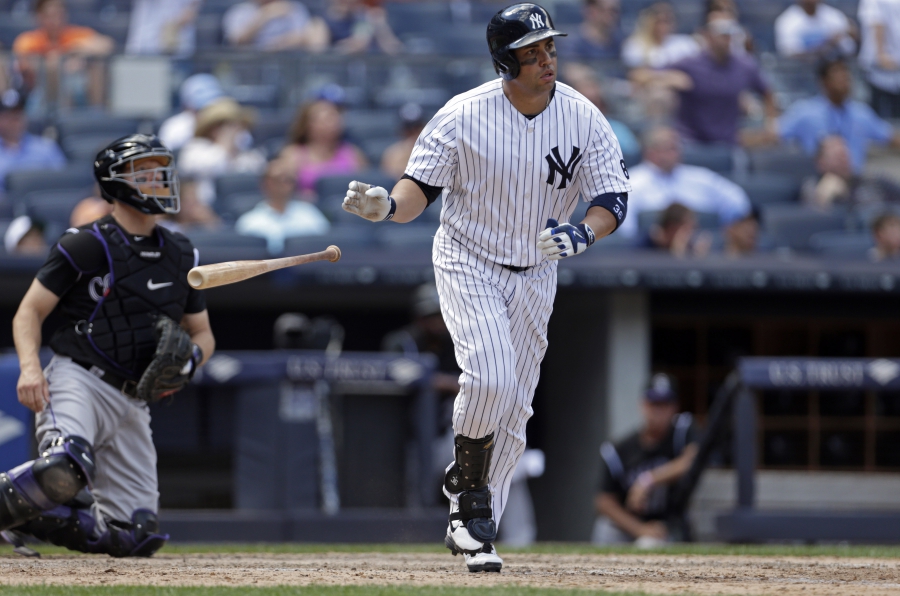 Carlos Beltrán is playing in his 18th Major League season. He has his more than 400 home runs and been selected to eight All-Star games.

Beltrán puts several hundred thousand dollars of his own money into the school each year. He can afford it — the Yankees pay him $15 million a year. Beltrán says he knows he’s been fortunate in his career. That’s why at his school, academics come first.

“Because only 1 percent make it to the big leagues ... it’s [a] very, very, very small window,” said Beltrán. “So I try to create an environment where the kids really focus on education. And at [the] same time, they will continue to develop themselves as a ballplayer.”

That’s important — baseball can be a ticket to a college scholarship for talented players. Puerto Rico’s public high schools have been plagued by exceptionally high drop-out rates, as high as 40 percent. That's not the case at Beltrán’s academy.

Out of 40 graduating seniors, three or four will sign with Major League teams this year. The rest are going to college.

“Every single one,” said Alex Diaz.

Every single one has a full or partial scholarship as well, often to schools on the US mainland.

There’s another thing that sets the Beltran Academy apart from many other Puerto Rican schools.

“I think the most important thing is that all the classes are in English,” said Gabriel Arroyo, who is entering his junior year. (There are some exceptions — Spanish class is obviously taught in Spanish.)

Mastering English is important for life, but also for baseball. For example, a coach can yell for Arroyo to hit his “cut-off” man. That’s a tough Spanish translation.

“Arrgh, that’s the thing, I know in English, but not in Spanish,” said Arroyo.

Gabriel Arroyo does a conditioning drill with ropes.

Arroyo spoke English with relative ease. But picking up a second language seemed to be a work in progress for most of the boys.

“They understand you. The thing is, they’re afraid to talk in English,” explained Diaz.

Still, the students at the academy are much further along than Beltrán was when he was drafted by the Kansas City Royals as teenager.

“No English. It was very hard for me,” said Beltrán. “Coming to the United States, a different culture, the language was a barrier for me.” (He’s now fluent in English.)

Besides the kids at his academy, Beltrán is also trying to help rebuild Puerto Rico’s rich baseball tradition. In recent years, the island has been eclipsed by Venezuela and the Dominican Republic as the major exporters of Latin American baseball talent.

That’s largely because Major League teams have set up baseball academies in those countries, dating as far back as the 1980s. Teams haven’t done that in Puerto Rico because teenagers from the US commonwealth are part of the draft. In the Dominican Republic and Venezuela, players can be signed as free agents. So, individual teams have set up academies to try to lure and develop top prospects.

And yeah, baseball’s just a game. But ball players are heroes to a lot of kids. And grown-ups. Beltrán’s accomplishments bring pride to Puerto Ricans. Beltrán gets that. And that’s why he wants to help produce the next crop of Puerto Rican stars to take his place.

“I’m doing the best I can to try and do something positive for my country,” Beltrán said.