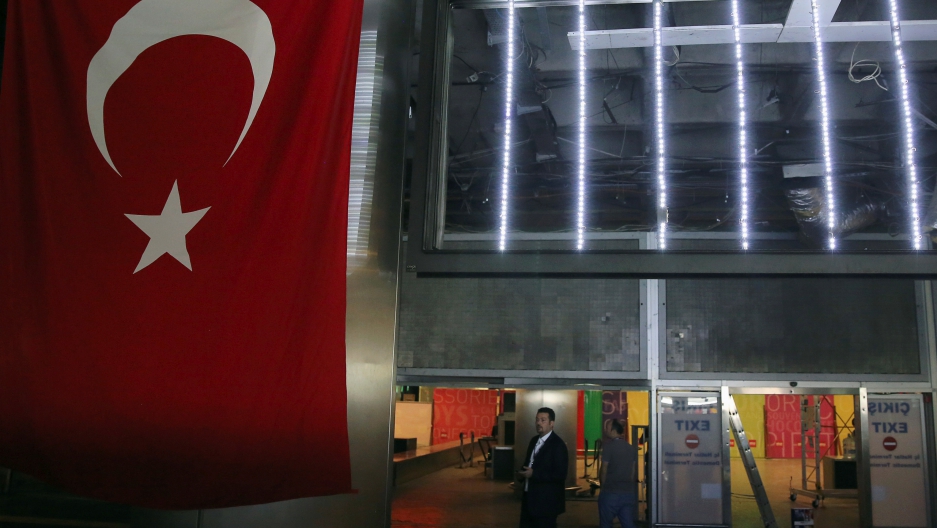 My husband Naeem and I sat at the Hard Rock Café. I laughed as a Turkish comedian joked about her father’s girlfriend, and the idiosyncrasies of life in the megalopolis I now call home. But I also looked around at the crowd in the unsecured restaurant on Istiklal Street, in the heart of the city, and thought what a good target this would be for terrorists: a room full of Westerners enjoying a night out.

I shared my thoughts with the comedian after she finished her act. She gave me an uncomfortable smile as if to say, let’s forget about that for now.

I couldn’t. When you live through suicide bombings like I did in Afghanistan, where I spent part of my childhood and later reported as an adult, security becomes a sense like smell or taste. Constant alertness replaces the feeling of safety. Anything can blow up anywhere at any time. Afghans already know this, but Turks were hoping they didn’t have to until now. The conflicts on Turkey’s borders with Syria, Iraq and Armenia were far enough from Istanbul to avoid the fear.

But that dread seized the city of 14 million on Tuesday night.

When the comedy show ended at 11 p.m., I turned on my phone to learn the news. Terrorists this time had attacked Ataturk Airport, a half-hour taxi ride from where we stood. It was the fourth terrorist attack in the city this year. Each time, the number of casualties and injured is greater. So far, 41 people are dead from Tuesday’s attack, and 230 injured. ISIS is the suspected culprit.

On Wednesday morning I told my two daughters that there had been an attack at the airport, but they would be safe at their summer day camp.

“How many were killed?” asked Bonoo, my 8-year-old.

I busied myself with breakfast and mumbled the number dead. She’s used to hearing me talk about terror attacks. It doesn’t seem to faze her much. Born in California, she was conceived amid the bombs in Kabul in 2007.

Bonoo was eager to grow up in Istanbul with her sister Andisha, who’s 5. We moved here seven months ago from the San Francisco Bay Area so that I could resume my foreign reporting career and expose our children to the city’s rich culture and diversity.

Istanbul seemed safe enough. Other journalists here moved from Cairo and Baghdad based on  similar reasoning. Now I’m not so sure.

War is my normal, but it shouldn’t be for my children.

After my daughters left for camp, I made my round of calls to friends in the city as I took a walk in our neighborhood park. I was one of five people in a place usually crowded with dozens of strollers.

“I couldn’t sleep last night. Something has to be done. This can’t go on like this,” my landlord Seyda Zeynep said. “The politics has become so confusing. I just know that I don’t feel safe here.”

Some friends with foreign passports have left the country. Tiare Rath, a former journalist and mother of a 3-year-old son, moved to Los Angeles with her family recently.

“We left Istanbul on Saturday for good just after a few months. The situation was too unstable for us,” she wrote on Facebook.

Istanbulites watch the news on TV to stay aware after each attack. They stay inside, avoid the tourist bazaars, the big malls, museums, resorts, commuter trains. Some even keep their children home from school. Anger consumes many who have to leave their homes for work — against the government, the flood of refugees, the policies of the West. The biggest fear of residents is an attack on trains and buses.

Many of my friends only drive their cars now, despite the three hours it takes to cross the bridges from the European to the Asian side of the city in rush hour. Some wealthier Turks are moving to Portugal, where financial investment can earn a residency permit. For those who don’t have the means to hide or leave, life goes on with the uncertainty.

“I travel two hours on the bus, do my job and pray that nothing blows up near me so I can keep feeding my family,” said Orhan, a street vendor selling Turkish bagels in the Kadikoy neighborhood, a hipster hub on the Anatolian seaside.

After each attack, Istanbul recoils, holds its breath for a day or two, then exhales again. It’s as if nothing happened. Life buzzes as it should. The terrorists seem to wait for that moment of amnesia to strike again.

Before the latest airport attack, Istanbulites were focused on fasting for the holy month of Ramadan, shopping for Eid and staying cool in the simmering heat. Tourism was down but the peak summer season held promise.

That enthusiasm and much hope ended with last night’s bombing. This time the mood seems different, perhaps because it was among the bloodiest strikes targeting civilians in Istanbul’s modern history.

It’s a cruel awakening that Turkey’s wars are no longer on its borders but in its cities, and no one is safe. This is what ISIS wants and its leaders are getting their wish: Fear has been instilled.

My last phone call was to my friend Tamim, a 23-year-old Afghan student in Istanbul. He reminded me of what resilience means.

Tamim told me he was at the airport on his way to Mazar, Afghanistan when the shooting began on Tuesday. He called another friend in the departure check-in section who was headed to Kabul. His friend Naz hid behind computer screens as she watched one of the gunmen fire, her legs frozen. She felt paralyzed and was transferred to the hospital where she’s recovering from the shock. Tamim was stuck at his departure gate for hours before he was allowed to exit the airport. But the airport re-opened quickly, and Tamim returned Wednesday to fly to Mazar for Eid.

“How can you return to the airport so soon?” I asked as he waited for boarding.

“Sister, I’m Afghan. We’re used to this. I just thank God for every moment I’m alive,” he said. “I’ll see you when I return to Istanbul.”

Fariba Nawa is an Afghan American journalist, speaker and author based in Istanbul.