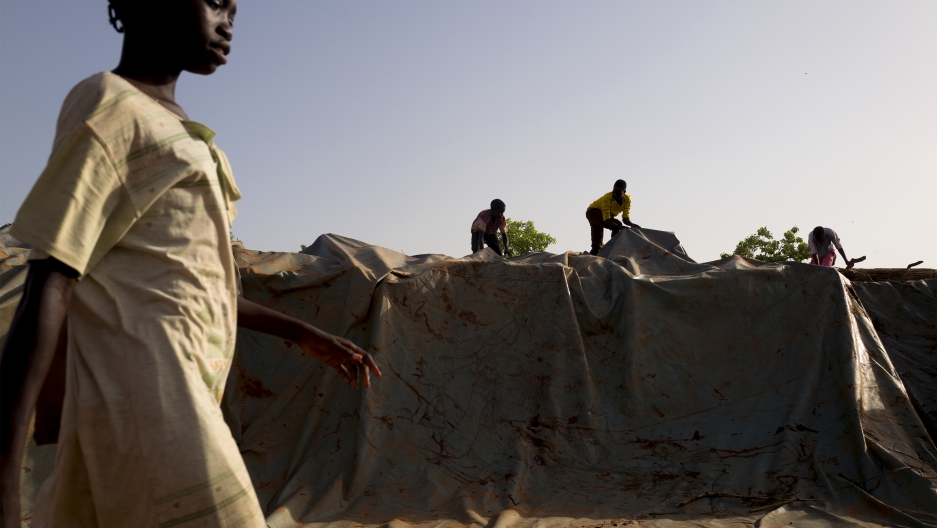 Students at the Yousif Kuwa primary school in the Yida refugee camp reassemble their classrooms made of sticks and tarp, knocked down in a recent storm. The UN does not consider Yida an official refugee camp and therefore does not support education.

Mornings at the Yousif Kuwa primary school in the Yida refugee camp begin with 2,000 students singing a national anthem of sorts. Their song celebrates the Nuba Mountains of Sudan, a region that’s been under siege by the Khartoum government for the last five years.

The school, just across the border in South Sudan, is named after a famous commander of SPLA North, the rebel movement now in control of large swaths of the Nuba Mountains.

Students carry empty tins of corn oil from food distributions to use as seats in class. Rainy season has begun and several classrooms were knocked down in last night’s storm. There is a scramble to reassemble the sticks and tarp. Despite the presence of 70,000 refugees in Yida, the UN does not recognize Yida as an official refugee camp and therefore does not provide education support. The teachers at Yousif Kuwa are volunteers.

I meet an aspiring doctor named Nawal Abdulrahman. Like many of the students here, she is angry with the UN for doing so little.

“Bring one person of the UN here,” she asks of me. “If this person comes, I will give them a chair. I’ll take my chair and sit in front of them. I’ll ask them face to face. Why did you not help us? Let them come.”

But Nuba leaders in the camp have stopped trying to get the UN to pay for schools. Now there is a more existential fight in Yida — the UN and the government of South Sudan are trying to shut the camp down by June 30.

A short walk from the Yousif Kuwa school, behind a high cement wall, is the UN refugee agency compound. People are busy moving out of offices made from converted shipping containers. Fatoumata Lejeune-Kaba heads the operations in Yida, which, she explains, have been limited to the so-called life saving activities of providing water, basic healthcare and food.

“Yida is not a refugee camp,” explains Lejeune-Kaba. “It’s a refugee settlement because refugees have settled here. You just never settle refugees in a militarized zone. Period. But of course nobody settled them, they came.”

Nuba refugees first arrived in Yida in 2011, when the Sudanese government began a bombing campaign targeting rebels and civilians alike. Thousands abandoned their villages and fled south across the border. In the five years since, Yida has grown to be the largest Nuba city, albeit 17 miles into South Sudan.

The complicated reality is that many families in Yida have fathers, brothers or sons who fight for the rebels. For years, the UN has claimed the camp is too militarized.

“With the presence of armed elements who are openly occupying schools and recruiting children, we just decided this is not going to work,” says Lejeune-Kaba. “The government [of South Sudan] is responsible for the safety of the refugees and they want to make sure that refugees are assisted where it’s safer.”

But residents in Yida deny the claims that rebels recruit in their schools. They also dispute whether the two new camps the UN has built an hour’s drive away, Ajuong Thok and Pamir, are actually safer. The camps are near a part of a border controlled by Sudanese government forces, the very army whose attacks they fled. Even so, some residents have moved, because the UN no longer issues ration cards in Yida.  Some are also going because they think the UN funded schools are better. Many families have sent their children on their own.

That’s what happened with high school student Teresa Osman. She lives in the Ajuong Thok camp with her two brothers.

“It’s good for me to stay here because I can study,” Teresa says. But her parents refuse to come. “They hear the situation is not good. This place has no security. They rape people here. If you go outside on this road, you will be raped immediately. That’s why we stay inside. We go to school and come and stay inside.”

Teresa Osman moved to Ajuong Thok, the UN built camp, so she could attend school. Last year Teresa reported stolen money to the South Sudanese police in the camp. Instead of investigating her claim, they beat her and held her overnight.

There are no numbers to show that rape is a bigger problem here than in Yida, but it is clear that Teresa fears both South Sudanese locals and the South Sudanese police who patrol the camp. On one occasion, Teresa went to the police to report stolen money. Instead of investigating her claim, they arrested Teresa, beat her, and kept her in a crowded cell overnight.

In the market in Ajuong Thok, a group of women chat and drink boon, traditional Nuba coffee infused with ginger, cardamom and cinnamon.

Amna Hamdan has lived in Ajuong Thok for three years now. When she fled the Nuba Mountains, she chose not to go Yida but to come straight here so that her children could attend UN school and get rations. She feels OK inside the camp, but it's scary to leave.

Amna and her children do not leave the confines of the camp anymore. Unlike in Yida, where refugees have cultivated farmland and developed trade routes, Amna depends entirely on humanitarian organizations for food and services.

Back in Yida on a Sunday morning, church songs spill out onto the red dirt roads. Inside a Lutheran church, people dance and make music with instruments made from the same repurposed corn oil tins.

After church, I ask the pastor whether he thinks the congregation will move. He says they probably won't.

“Here people have already built," he says. "They have settled. You have your house. If you go there, they will give you one tent. You have eight children and a wife and husband. One tent cannot carry this number. To leave and go and suffer again is hard.”

It’s not just about houses though. There’s also more freedom of movement in Yida. And with armed groups nearby, that freedom of movement makes authorities nervous. Leaders in the Nuba community suspect the Sudan government, via the UN and South Sudan, is the driving force behind the decision to close Yida. Khartoum claims the rebels get supplies from Yida.

The pervasive distrust of the UN in Yida stems back to events in Sudan. When war first broke out in June of 2011, thousands sought protection around a UN base in the state capital Kadugli. Sudan security agents walked among the crowds, shooting people suspected of supporting the rebels. UN peacekeepers did not intervene.

Many of the first refugees that arrived in Yida came from Kadugli. They brought with them first hand accounts of the killings. Similar atrocities have recently occurred on UN bases throughout South Sudan, making it difficult for the refugees to put their fate in the hands of the UN.

Meanwhile, some families in Yida are packing up to go home to the Nuba Mountains. They would rather live in a warzone again than be moved around like pawns on a chess board.

Every month, the World Food Program distributes sorghum, lentils, corn oil and salt to Nuban refugees in the Yida Refugee Camp. This year budget constraints forced WFP to cut rations to 70% and many complain the food is not enough.

The UN stopped issuing ration cards in 2013 to discourage refugees from settling in Yida, but this has not entirely deterred new arrivals. Many are given food by family or friends in the camp who have ration cards, or they grow their own food in farms bordering the camp.