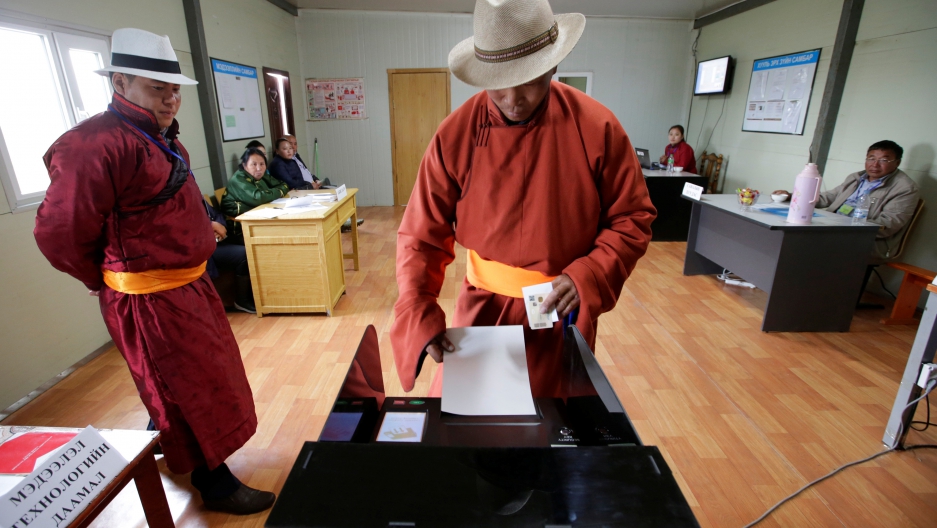 A villager casts his vote at a polling station on the outskirts of Ulaanbaatar, Mongolia, on June 29, 2016.
Credit: Jason Lee
Share

Mongolians went to the polls across their sprawling, sparsely-populated country Wednesday as it struggles to benefit from its vast natural resources amid disputes over foreign investment and slumping demand from neighbouring China.

Squeezed between Vladimir Putin's Russia and Communist China, Mongolia prides itself on its democracy, but voters expressed frustration with the country's poor governance and weakened economy.

Many said they feared a repeat of 2008 riots that followed claims of election tampering.

The contest largely comes down to a choice between the ruling Democratic Party and the opposition Mongolian People's Party.

Both their campaigns have been heavy on bromides about economic development but light on concrete proposals for tackling voter concerns, including improving the country's educational and health care systems.

In Mandalgovi, capital of the province of South Gobi, mother of three Shatariin Chahdal told AFP: "I voted for an independent candidate, who is young and wise.

"I want the new government to focus on creating new jobs rather than delivering cash handouts."

Across the country — more than twice the size of France, but with a population of only three million — trucks with mobile ballot boxes crisscrossed the vast steppe to enable the sick and elderly to vote, while herders and others streamed to polling stations in set up in gers,traditional Mongolian tents.

But while enormous efforts have been made to ensure participation in even the most isolated areas, enthusiasm for voting has waned in the 26 years since the young democracy threw off the yoke of Soviet influence.

Turnout has declined each election cycle, a trend that experts attribute to increased scepticism in the country's political class.

"As the economic crises persist, there's considerable mistrust in the political system," Morris Rossabi, an expert on Mongolia at Columbia University, told AFP, adding that voters were "facing increasing disillusionment with political parties".

Mongolia's vast natural resources have drawn the attention of multinational mining giants, such as Anglo-Australian Rio Tinto, which has a multi-billion-dollar copper and gold project at Oyu Tolgoi.

But political disputes over the role of foreign investment — and at what price — have stymied development, while slowing growth in China, by far Mongolia's biggest trade partner, has sent commodity prices collapsing.

China's economy grew 6.9 percent last year, the worst since 2009, meaning less demand for the raw materials, such as coal, that Mongolia supplies.

For its part Mongolia enjoyed world-leading growth of 17.3 percent in 2011, but that slumped to 2.3 percent last year.

One third of voters had gone to the polls by noon on Wednesday, the election commission said.

Ashleigh Whelan, country director for the International Republican Institute (IRI), which has observers all over the country, said turnout had been high in the countryside but disappointingly low in Ulan Bator.

Ganbaatareen Jargal, 25, is a trained mining engineer but has to work on building sites instead due to the government's failure to expand the resource sector, he said as he watched a campaign rally Saturday in a slum district on the fringes of Ulan Bator.

Politicians "have to fulfil all their promises", he said. "There are so many things to demand."

In May, just weeks before the election, a court ruling also changed the electoral system from a partly proportional setup to first-past-the-post in each constituency, severely limiting the chances of any parties other than the main two securing a significant presence in the 76-seat State Great Hural.

The change raised allegations of a backroom power sharing agreement between them.

According to polling by the IRI, over 60 percent of Mongolians feel that the country is headed in the wrong direction.

Respondents said they would vote for the party that could best deliver economic development and jobs.

But some voters are simply resigned to keep the status quo.

"If another party wins, they have to finish the job that the DP started ... they're going to waste four years, complaining that we had to restart everything because the DP made such a mess."