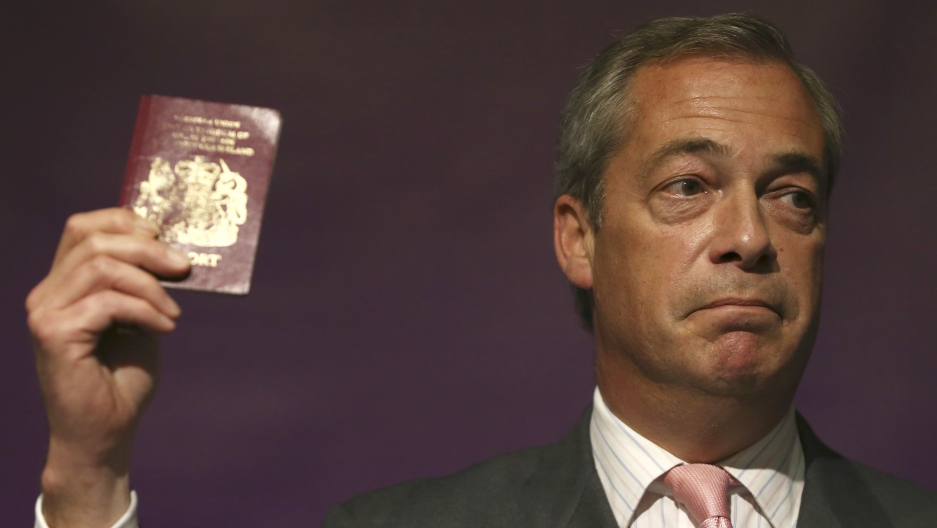 Leader of the UK Independence Party Nigel Farage holds his passport as he speaks at a pro-Brexit event in London on June 3.

A study from earlier this year found that the UK passport was among the top three "most powerful" in the world.

It could get you into 175 countries without having to apply for an advance visa.

But after the Brexit vote, there's a fair chance this won't be the case for much longer. It is unclear whether people from the UK will be able to continue traveling freely around the 27 remaining countries of the EU.

This has a lot of Brits looking for alternatives, so they can hold onto their right to free movement.

For many British people, getting a passport from another EU country will be pretty much impossible. They will have to wait and see what happens.

But if you were born anywhere on the island of Ireland — or have parents or grandparents who were — then you are eligible to apply for a passport from the Republic of Ireland, which has no plans to leave the EU.

(A friendly reminder for the geographically challenged among us: Northern Ireland is part of the United Kingdom, which last week voted to drop its EU membership. But the Republic of Ireland has been independent of the UK since shortly after World War I and will remain an EU member.)

Since Friday morning's referendum result, thousands of people have been applying for Irish passports. It's happening particularly in Northern Ireland, where most of the population qualifies, and where, unlike England, almost 56 percent of voters chose to remain in the EU.

“Across Belfast over the weekend, you had post offices running out of application forms for Irish passports,” said Chris Page, the BBC’s Ireland correspondent. “The Irish foreign minister has moved to calm people down … he’s worried about the Irish passport service being overwhelmed by the number of applications.”

So here's where we're at. This is the central post office in Belfast #brexit #EURefResults pic.twitter.com/YiZsSID3kU

According to Page, the surge in Irish passport applications may suggest people in Northern Ireland are “reconsidering their identity in some way.” But more likely, he says, people are just thinking practically about how much easier it will be to go on a European vacation in the future with an EU passport.

Of more serious concern to many in Northern Ireland is the question of whether a physical border will be established along its frontier with the Republic of Ireland.

The UK's divorce from the continental club is expected to take at least two years. Once it is formalized, the Irish border will represent the only land frontier between the UK and the EU. It is unclear how this will actually work, particularly if the two sides adopt different immigration policies.

“It’s still very early days and that is certainly one of the key things that people here are discussing,” Page said. “What is going to be very important in working that out will be the Republic of Ireland’s role in the EU negotiations.”

It's raised questions about the economic implications for towns on opposite sides of the border that trade regularly with one another. And there is also concern about the practical difficulties this will cause for people who commute across the border.

“There are estimated to be at least 15,000 people who cross the border every day for work,” Page said. “There’s a lot of anxiety in border regions about all of this.”