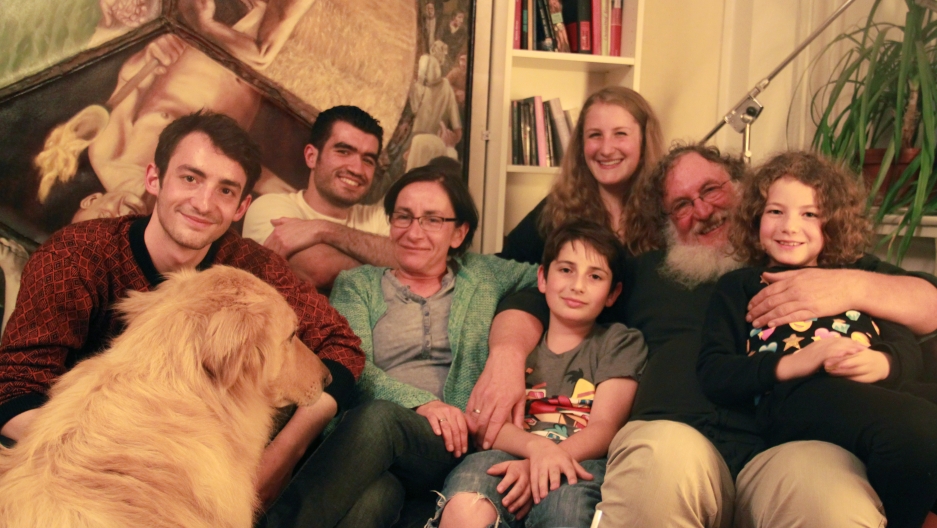 The Jellinek family in their home in Berlin, with their houseguest, Kinan, a Syrian Muslim refugee (second from left). When Chaim Jellinek told Kinan he was Jewish, Kinan said he had no problem with that.

When the Jellineks’ 20-year-old son moved out of the house, a 28-year-old refugee from Syria moved in.

Germany has taken in hundreds of thousands of Syrian war refugees over the past year. Some Germans hosted refugees in their homes.

But the Jellinek family stands out as a German Jewish family hosting a Syrian Muslim in their home for the long term — at a time of growing hesitation among Germans, and German Jews in particular, about the million and a half newcomers to their country, mostly from the Middle East.

“I think most of the Jewish community want to welcome refugees. That’s one side,” says Chaim Jellinek, sitting in his living room on a recent Friday evening before Sabbath dinner. “The other side is that many Jewish people fear radical Islamism.”

The head of the Central Council for Jews in Germany, Joseph Schuster, told a German newspaper in November that Germany should set a limit on the number of migrants arriving.

"Many refugees are escaping the terror of Islamic State and want to live in peace and freedom," Schuster said in the interview. "At the same time, they come from places where hatred of Jews and intolerance are an integral part of the culture."

The Jellineks belong to an egalitarian synagogue in Berlin where men and women participate equally in the services. It’s an old synagogue that Nazi forces once seized and used as a warehouse.

The temple is involved in refugee aid, and the Jellineks have also dedicated themselves to the cause, co-founding a refugee assistance organization, FREEDOMUS, which published an informational handbook to help refugees overcome the difficulty of integration in Germany.

“I really think that that’s the only good way to solve that problem, to get a connection to the refugees and to welcome them,” Chaim says.

He and his wife Kyra were volunteering with Syrian refugees when they heard about Kinan, a pharmaceutical salesman who fled his native Damascus, made the long journey from Turkey across the waters to Greece, and then all the way north to Germany.

Kinan, who asked to be identified by his first name, was living under difficult conditions in a refugee center in Germany.

When Chaim Jellinek met him, he told Kinan his family was Jewish — and Kinan said he had no problem with that, Kinan recalls.

“You come from a place where there is war, and someone welcomes you,” he says. “To you, he seems like a really good person.”

Kinan says he knows there is bitterness between Arabs and Jews in the Middle East, but that he never saw Jews as an enemy. Yes, there is animosity between Israel and Syria, but that's a matter of politics and has nothing to do with religion, Kinan says. 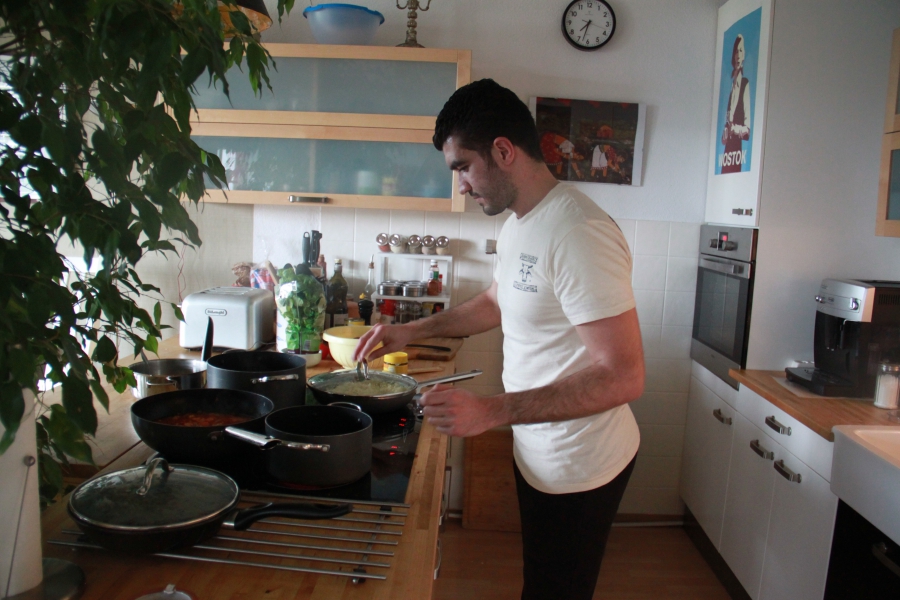 Kinan, a Syrian refugee, prepares a meal for the Jellinek family's Sabbath dinner in Berlin. He says he learned out to cook from youtube videos.

Kinan was in charge of the evening’s Shabbat dinner. He hovered over four dishes simmering on the stove: spiced rice; kawwaj, a Syrian stew he made with tomatoes and onions; ground beef with garlic; and lentil soup.

Kinan says he learned how to cook largely from YouTube. He started cooking for himself when he left Damascus on his own.

When the food was ready, Kinan and the Jellineks gathered around a long table: Chaim, Kyra, and their four children: Lilli, 8; Joshy, 12; Rosa, 18; and Béla, 20.

Chaim handed out yarmulkes for his sons to wear. Kinan put one on, too.

The family recited the blessings over the Sabbath candles, the wine, and the challah bread. They ate and joked for hours.

Kinan laughed along with them. Then he admitted he didn’t really understand much of the German. Everyone at the table laughed, him included.

He’s studying German in language classes full-time, and the Jellinek kids often help him with his homework.

“It’s amazing, because you learn a lot from each other — like cooking, like celebrating Shabbat,” says Rosa Jellinek, 18.

“A few weeks ago, he said goodnight to me, but he said it in the wrong way. I said, OK, you have to say ‘good night’ and not, I don’t know, ‘night good,’ or whatever you would have said in English,” Rosa says.

“He said it wrong three times for three evenings after that, but then he started saying it the right way,” Rosa adds. “It was nice to see that he learned more German, that I can help him.” 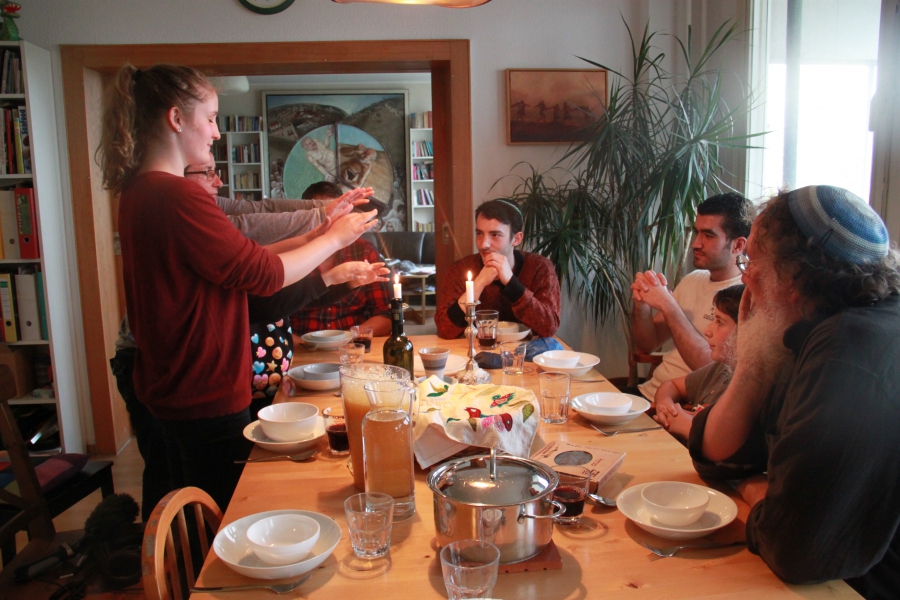 The Jellinek family lights the Sabbath candles for Friday night dinner. Chaim Jellinek says he thinks the only good way to integrate refugees is to welcome them.

On the sofa, Chaim Jellinek reflected on his country’s warm welcome for refugees.

“This has been one of the most important things in my life because with that moment, we saw a completely different Germany, something we hadn’t seen before,” Jellinek says. “Open-minded. Friendly, really friendly.”

He converted to Judaism years ago. Kyra’s mother survived the Budapest ghetto during World War II. The family is sensitive to the dilemma of being Jewish in post-Holocaust Germany.

As Germany has given a home to newcomers from a different religion and culture, Chaim says he’s felt more at home himself.

“We’ve been very lucky to meet Kinan,” Chaim says. “He opened a door for all of us to look at our country in a different way.”