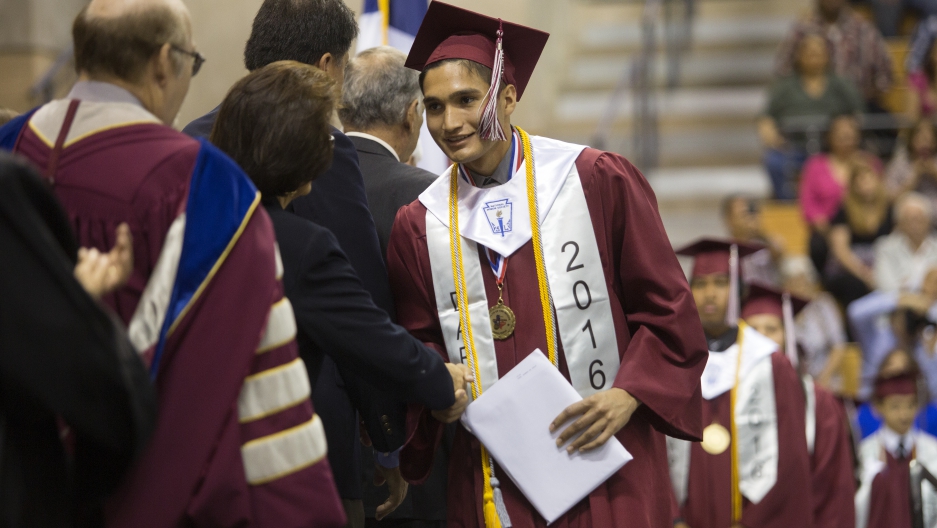 Nearly 100 students enter the gym at Texas A&M International University in Laredo, near the US-Mexico border. They are practicing for their graduation and, as they enter, "Pomp and Circumstance" fills the gymnasium.

"You’re going to be shaking hands and then you have three seconds with the picture," says Principal Israel Castilla, who takes the students through the ceremony.

These students, though, aren’t graduating from college. These are high school students, but many of them are already halfway toward a college degree, because of a program at their school: Laredo Early College High School. 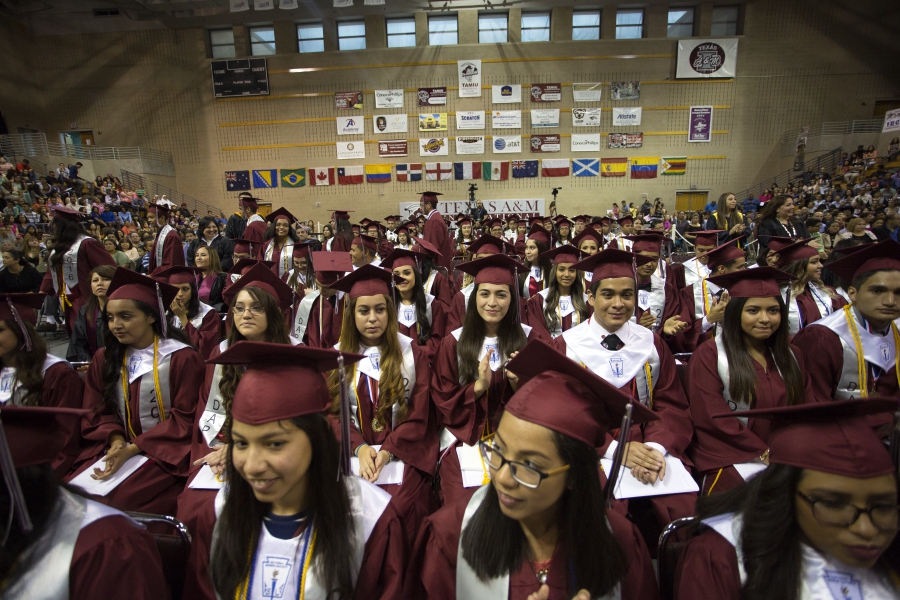 Two days a week, students take courses at a college campus with other college students. The rest of the week, they’re back at their high school where they review material and complete coursework. That way, they can simultaneously work toward their high school diploma and earn credit toward a post-secondary degree for free. It’s a big help for low-income and first-generation college students, bringing them into the higher education system and making it more affordable.

“I saw it as an opportunity to get ahead of everything, especially with college credits,” says Homero Coss, 17, a senior at the school. “Even then, I knew I was coming from humble beginnings, and whatever I could do to help pay for my college, I was going to take advantage of that.”

At first, Coss felt odd being in a college classroom with older students. “It was scary,” he says. “I was a 15-year-old kid with 20- even 30-year-old college students.”

But he got over it and did well. Coss moved to the United States from Mexico when he was 3 and has lived in Laredo ever since. His father worked construction while his mom cleaned houses and raised Coss and his five older sisters. Watching his parents work hard for modest wages made him want to go to college and have more opportunities than they did.

“When we came here, my mom did a lot of housekeeping jobs, and I would see these people with big beautiful houses and would think why wouldn’t we live in those houses?” Coss says. “If I had a chance to have my family live in houses like that and live peacefully, live in comfort, I wanted to do that. I wanted to create a better home for my family.”

Castilla says for many first-generation families, college can seem like an impossible goal. Just 16 percent of Texans in the Rio Grande Valley have a bachelor’s degree or higher. Castilla thinks early college high school programs can help fix that.

Usually, early college high schools partner with community colleges. If students take enough classes, they can earn an associate’s degree or certificate before they graduate, which means they can immediately enter the workforce after high school.

At this school in Laredo, the stakes are higher. The school partners with a four-year university and students can earn up to two years of college credit. But it means they need to keep going after graduating high school to earn a degree.

“You have to continue at it. You’re not getting anything yet,” Castilla says he tells students. “But you’re halfway there.”

As the youngest in his family, Coss says he benefits from a school that didn’t exist when his sisters were in high school. Most of his siblings haven’t been able to attend college because it’s too expensive and life got in the way. But Coss is graduating with around two years’ worth of college credit from Texas A&M International University — $40,000-plus in savings. He plans to go to the University of Texas, Rio Grande Valley and study biomedical science.