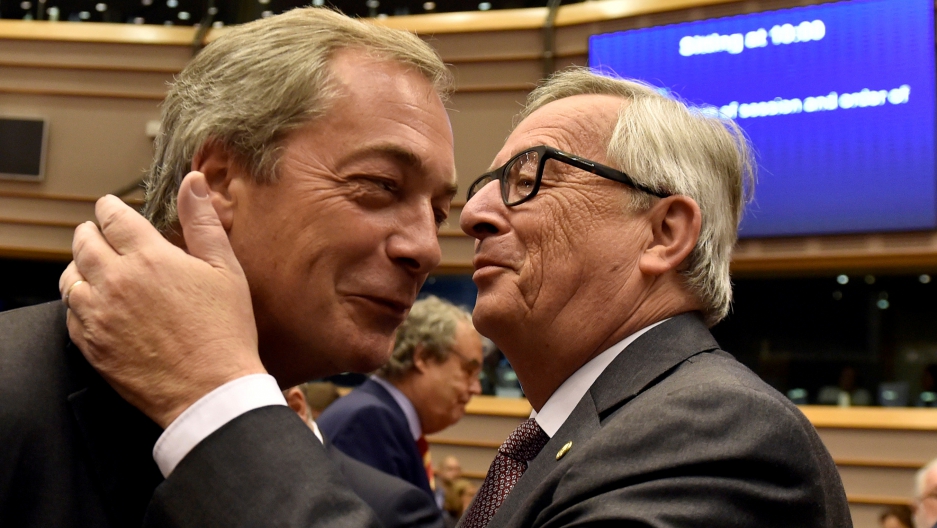 European Commission President Jean-Claude Juncker welcomes Nigel Farage, the leader of the United Kingdom Independence Party, prior to a plenary session at the European Parliament on the outcome of the "Brexit" in Brussels, Belgium, June 28, 2016.

Regret is just one feeling in the Brexit vote. The other could be illusion — as in, the whole Brexit vote was one giant hoax. Britain will never actually leave Europe.

That's the take Andrew Moravcsik has on Britain. He's a professor or politics at Princeton and his subject is the European Union.

To him, you should call the whole Brexit drama what it actually is: "Kabuki theater."

"Kabuki theater is a metaphor we use here in the United States for stylized political rhetoric that is misleading or meaningless," he says. "Brexit in Britain has mostly been about domestic politics. It's been about ambitious people, politicians, who are seeking domestic political power — particularly people like Boris Johnson who is seeking to be prime minister — much more than it's really about a thoughtful systematic effort to improve Britain's position in Europe."

The EU continues to nudge Britain to make a decision, and make it quickly in order to avoid more economic uncertainty. But Britain is stalling. Prime Minister David Cameron already pushed action on it back to the fall, when a new prime minister comes to power. Even then, that leader doesn't have to immediately start the separation. And if British Parliament does move to leave the EU, that process takes at least two years.

So you get where this is going.

"British politicians have manipulated the public into a Brexit vote. But this Brexit vote is not, as a concrete policy, viable. So they are going to have to backtrack and find a relatively modest policy that keeps Britain, for practical purposes, in Europe," he says.

That's why Moravcsik believes we are just in the opening act of this Kabuki drama. "I think it is extremely unlikely Britain is going to leave Europe in any sense of the word. We're only at the very first step."