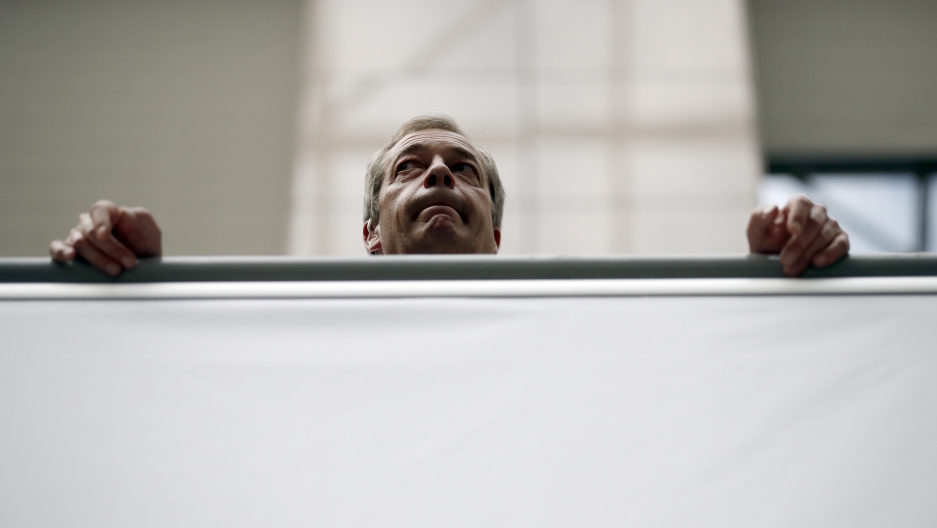 The leader of the UK Independence Party, Nigel Farage, in Brussels.

The European Union faces an existential crisis, but the first order of business in Brussels on Tuesday was a debate on regulations governing weed killer in the 28-nation club.

Some say that’s typical of the European project. Excessive regulation, and poor priorities.

And yet the future of Europe is on the line after Britain voted to leave the EU last week.

On Tuesday, British and European leaders gathered in Brussels to try to pick up the pieces.

Among them was none other than Nigel Farage, a leading "Brexiteer," who had this to say to his colleagues in the European Parliament:

"Isn't it funny. When I came here 17 years ago and I said I wanted to lead a campaign to get Britain to leave the European Union, you all laughed at me. Well, you're not laughing now, are you?"

Farage is himself a member of the European Parliament, for the UK Independence Party.

Seated across from him was the president of the European Commission, Jean-Claude Juncker.

Juncker had welcomed Farage with a kiss, and said the democratic will of the British people must be respected. There was applause. Farage joined in and kept clapping after everyone else had stopped.

"That's the last time you will be applauding here,” said Juncker. “And to some extent, I’m really surprised that you are here. You were fighting for the exit. The British people voted in favor of the exit. Why are you here?"

European Commission president: "The British people voted in favor of the exit. Why are you here?"

Farage hit back, saying most of the lawmakers there had never had a proper job in their lives, or ever worked in business, or created a real job. He called for immediate, serious, “grown-up” negotiations on Britain’s departure from the EU.

Euro politicians want that too. But Britain’s outgoing prime minister, David Cameron, is dragging his feet, saying that process can’t start till his replacement takes office in the fall.

“[Farage] really was throwing punches,” says Tara Palmeri of Politico Europe. “I mean, he was the winner in this battle so I think he didn’t need to come out like that. It seemed like he really was just laying it on a little too thick. Especially considering that the rest of them are going to vote on the terms of the divorce between the UK and the 27 others.”

“I thought that was strategically not in the best interests of the UK,” Palmeri says. “But at the same time, this is his schtick; this is his meal ticket. He’s been arguing for Brexit for the past 17 years, so I guess he wanted to take his victory lap and he did.”

Farage was heckled and booed. But there were also some cheers. Not only were the cheers coming from other members of the UK Independence Party, but from euroskeptics from other nations as well. Marine Le Pen from France even made a speech congratulating the Brits. Palmeri says euroskepticism is also strong in the Netherlands and the Czech Republic.

“It’s not an isolated or contained thing at this point,” Palmeri adds. “It’s actually considered kind of a contagion.”

“If they lose France,” she warns, “that could be the end, because France and Germany are the core countries.” Palmeri says intense political maneuvering is taking place to keep Europe together.

Le Pen’s National Party is currently polling around 27 percent. Other polls say the French people are even more skeptical about the EU than the British.