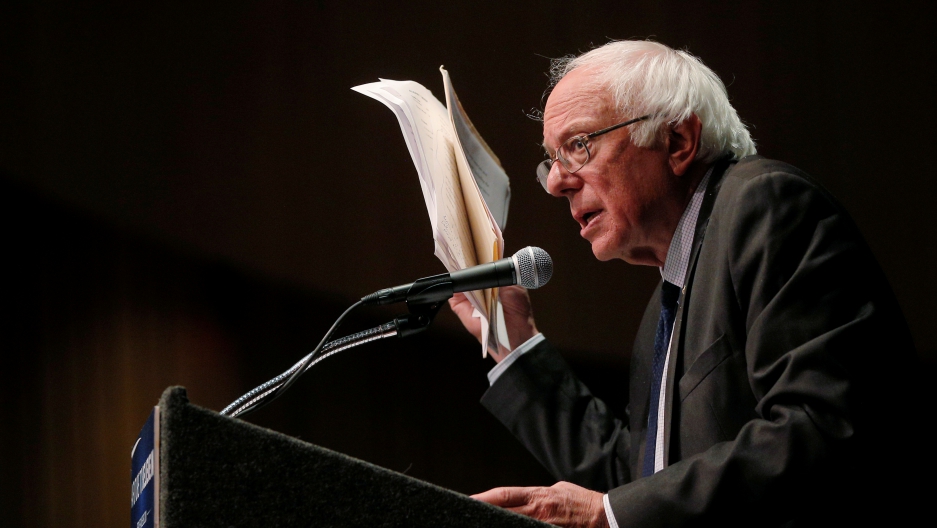 US Democratic presidential candidate Bernie Sanders holds up his notes while speaking about his attempts to influence the Democratic party's platform during a speech in Albany, New York, June 24, 2016.

Over the weekend, the Democratic National Committee began drafting the party's official policy platform, which will be rolled out next month at the organization’s national convention in Philadelphia. Though it’s virtually impossible that Sen. Bernie Sanders would become the Democratic nominee, he'll still have a big influence on the party's agenda going forward.

Yet, some Democrats want the senator from Vermont to exert more influence now — and endorse Hillary Clinton, his party’s presumptive presidential nominee. Though he did say he plans to vote for the former secretary of state in November, Takeaway Washington Correspondent Todd Zwillich says this quasi-endorsement isn’t enough for the Clinton camp, or for many in the Democratic establishment.

“This is not the kind of endorsement that Hillary Clinton’s going to need from Bernie Sanders if she wants to make sure that she shores up all of that progressive energy in the general election, which she’s going to need,” Zwillich says. “When I talked to a lot of Democrats over the weekend about this draft platform and the relationship now between Sanders and Clinton, many of them, Clinton supporters, are of course disappointed that Sanders hasn’t endorsed her yet, but says that just has to come at the convention when he speaks.”

Though primary season didn’t push him to the top, Sanders has secured a few victories when it comes to the Democratic policy platform. According to Zwillich, the senator has been able to push the party’s agenda very far to the left, making it more progressive than it’s ever been.

“The $15 minimum wage is in there — as you know Hillary Clinton is only for $12 — so that’s a Sanders concession,” Zwillich says. “There are steps in that platform toward breaking up banks that are too big to fail, they call it the new Glass-Steagall language. That’s in the Democratic platform, and it also now calls for the abolition of the death penalty, something Hillary Clinton favors in certain circumstances.”

“He lost in some key areas,” says Zwillich. “There is no ban on hydraulic fracking, which the Sanders campaign desperately wanted; there’s no calls for a carbon tax, even though there is some strong language on climate change. Bernie Sanders wants to expand Medicare into national single-payer healthcare, and the platform does not call for that because it still calls for building on the successes of Obamacare.”

However, it appears that Sanders’ biggest defeat in the DNC party platform comes in the form of trade and the Trans-Pacific Partnership (TPP).

“We have all seen Sanders’ strong position against TPP, and Hillary Clinton is now against TPP after being for it during President Obama’s first term,” says Zwillich. “However, that [DNC] draft document does not call for the overturning of TPP — they just couldn’t do it. Why? Because Barack Obama’s for it and they don’t want a Democratic Party platform that goes directly against the interests and policies of the president as he leaves office. But it does have language in there about protecting worker rights and the environment, and some other things you might expect.”

For now at least, Sanders can claim a number of rhetorical victories. But it’s unclear if a President Hillary Clinton and the upcoming 117th Congress would adopt the ideas laid out in the Democratic Party platform.