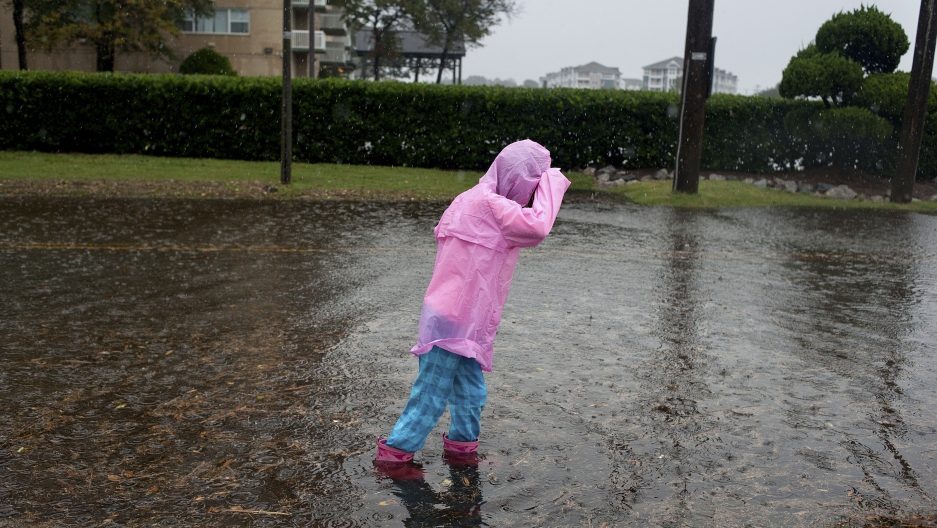 Hurricane Sandy sent 8-year-old Avery Solan out to play in the flooded streets of Norfolk, Virginia, in October 2012. The city is trying to prevent worse flooding as sea levels rise, and at the same time grow new industry in a region currently dependent on military jobs.

Climate change is going to be expensive.

Adaptation and mitigation will cost the world billions, maybe trillions, of dollars. It’ll be a massive hit to the global economy.

But at least some of that cost is also an economic opportunity, and everyone from snow-machine makers to agribusinesses are angling to make money off of climate change.

Add to that list the city of Norfolk, Virginia.

Norfolk businesses, universities, and even the local government itself in the low-lying coastal city are trying to re-frame the risk of sea-level rise as an opportunity. 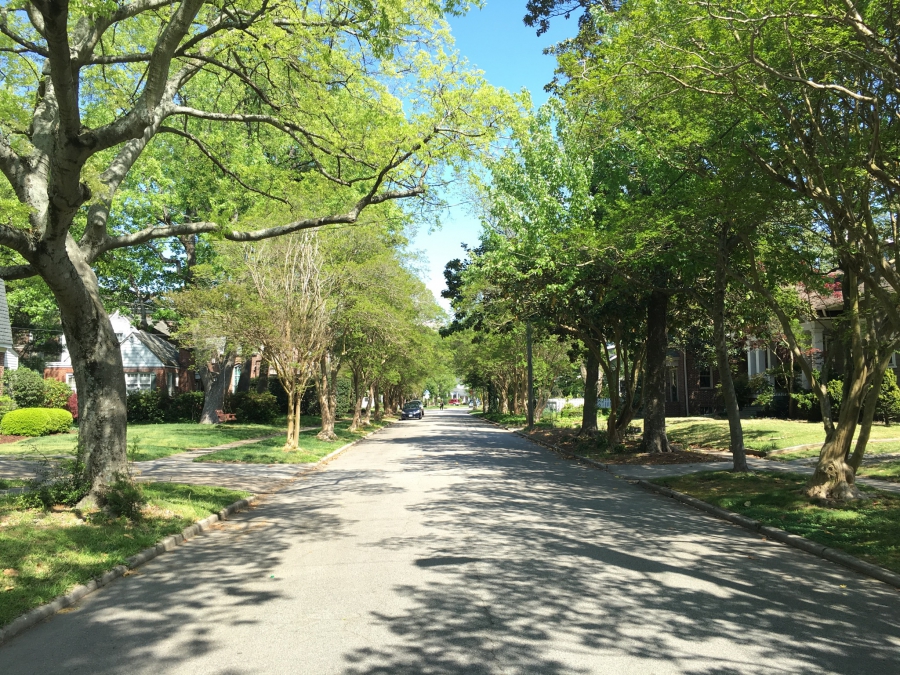 Some of the most desirable neighborhoods in the Hampton Roads region are also the most vulnerable to sea-level rise.

The new mindset is already starting to take hold at the most basic level of the local economy: real estate.

Proximity to the water has long been a big selling point in Norfolk real estate. The city sits low on the coast by the Chesapeake Bay, and some of the most desirable neighborhoods are right on the water.

But recently, waterfront property has lost some of its luster.

“The first question we get in most cases [from buyers] is, ‘Is it in a floodplain?,” said longtime Norfolk real estate broker Kathy Heaton. “And if so, how much is the insurance?”

Case in point: Heaton was close to closing on a two-story house in the desirable Norfolk neighborhood of Larchmont two years ago when the sale hit a snag.

“We’re in the inspection, the agent gets a phone call and finds out that the flood insurance premium on this house would be $3800 a year,” Heaton said, “way above what anybody who was going to buy this house could afford.”

That’s when Heaton called Mike Vernon, who runs a business called Flood Insurance Hampton Roads, which aims to reduce homeowner’s flood insurance premiums. He sees an opportunity in the very same thing that scared away the Larchmont home’s buyer.

Flood insurance premiums are likely to increase because the sea level in and around Norfolk is rising fast. It could go up as much as six feet by the end of the century, and residents here are already seeing increased flooding. 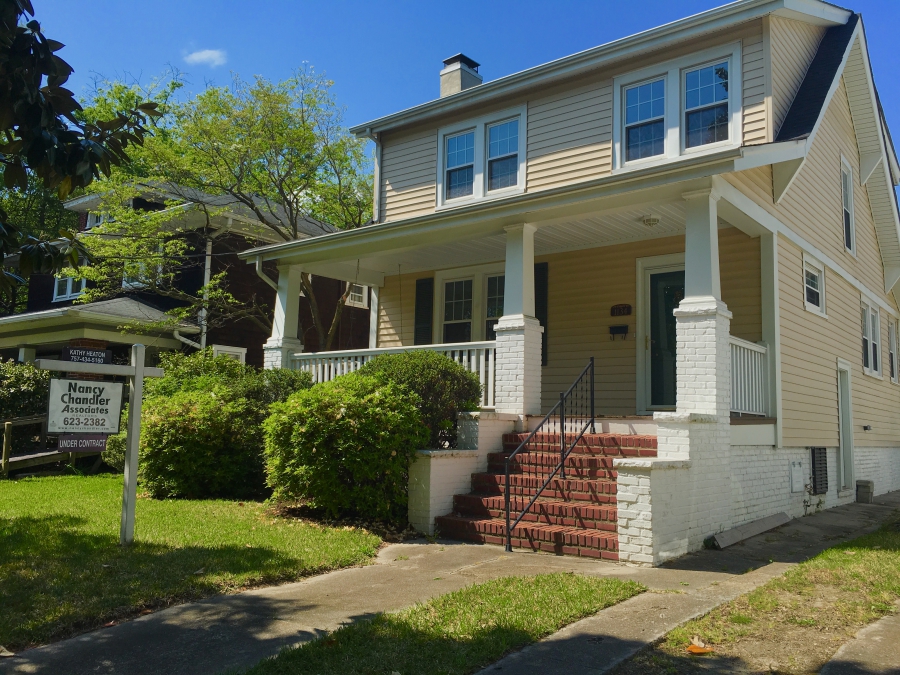 Some homeowners have responded to the risk by raising their houses on stilts to lower the flood risk and, in turn, flood insurance premiums.

But Vernon takes a different approach. In the Larchmont home, he installed a drainage system and flood vents in the basement, then filled the basement in with sand.

That changed the base flood elevation — the elevation that flood insurance premiums are calculated on — from the basement up to the first floor of the house.

“Once we put in the sand and vented the crawlspace area, the rating for flood insurance went up almost twelve feet,” Vernon said.

Vernon said that change reduced the annual flood insurance premium on the house from $3,800 to about $400.

Vernon’s new flood mitigation business is still struggling. He’s closed and re-opened with a different business model over the past few years. But he believes worries about flooding and flood insurance have grown large enough in the Norfolk region to keep his business afloat.

“When we get that word out, I think that my business will be booming,” Vernon said. 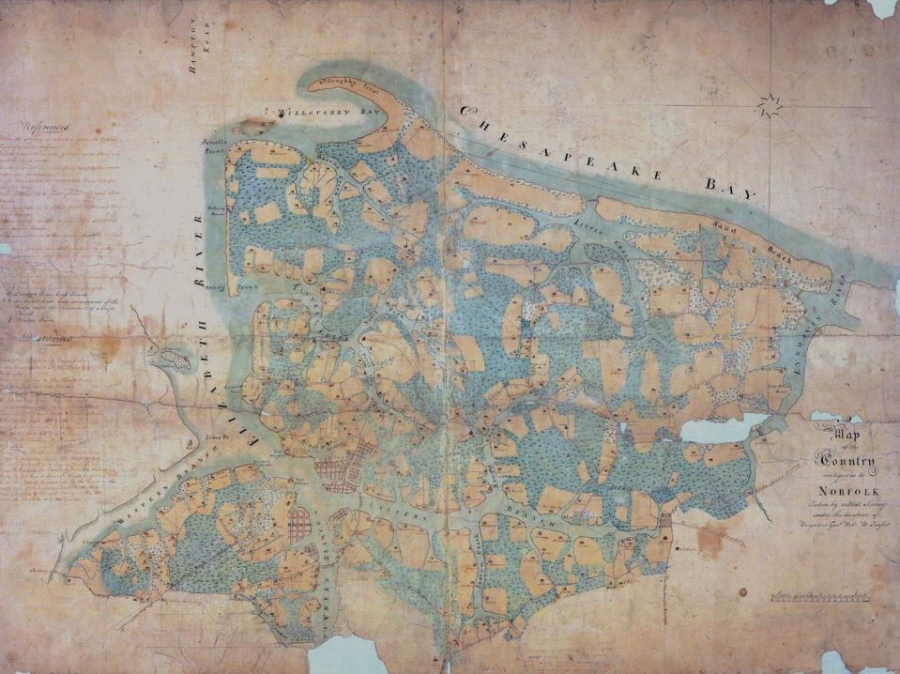 A historical map of the Hampton Roads region shows that much of what is now land used to be swamps and streams.

Courtesy of the Dutch Dialouges Virginia.

Norfolk angling to be the Dutch of the US

Globally, a 2014 study found the cost of protecting the world’s shoreline could reach into the tens of billion of dollars a year by the end of the century.

And in Norfolk, Vernon isn’t the only one who sees climate change as an opportunity.

The region’s universities are trying to position themselves as experts in dealing with sea level rise. The city’s 2015 resilience plan includes an economic strategy.

“The half-empty glass is we’ve got the highest sea-level rise on the east coast and we’re soggy,” said Skip Stiles, head of the Norfolk-based conservation group Wetlands Watch. “The half full glass is if we fix it, we can make money off of it.”

“It wasn’t just [about] this neighborhood,” Stiles said.

The bigger idea behind the design work, which was done by students at nearby Hampton University, was to train a generation of architects and engineers who know how to ease flooding problems.

“Can we solve Norfolk’s problems, and then develop the expertise to make money selling those solutions to Baltimore and Charleston and Savannah?” Stiles said.

Basically, Stiles wants to know: Why can’t Norfolk be the Netherlands of the US?

The Dutch make about two percent of their GDP by exporting water expertise, according to the Dutch embassy in Washington, DC. 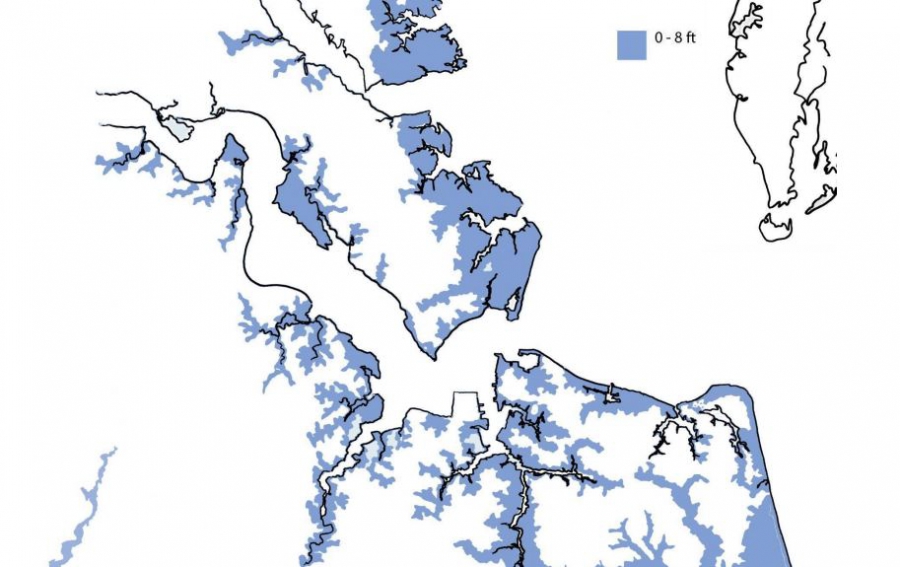 Significant portions of the Norfolk, Virginia, region are between 0 and 8 feet above sea level. They could be inundated within a century if some of the highest regional predictions for relative sea level rise occur.

Courtesy of the Dutch Dialouges Virginia.

Norfolk’s deputy manager Ron Williams said the city is launching a $12 million “Coastal Resilience Laboratory and Accelerator Center" in hopes of claiming a piece of the sea-level rise adaptation pie.

“It sort of resembles the big black bird circling overhead,” Stiles said, likening the new companies the city hopes to attract to vultures, “but I think if they bring solutions, so be it, I don’t much care.”