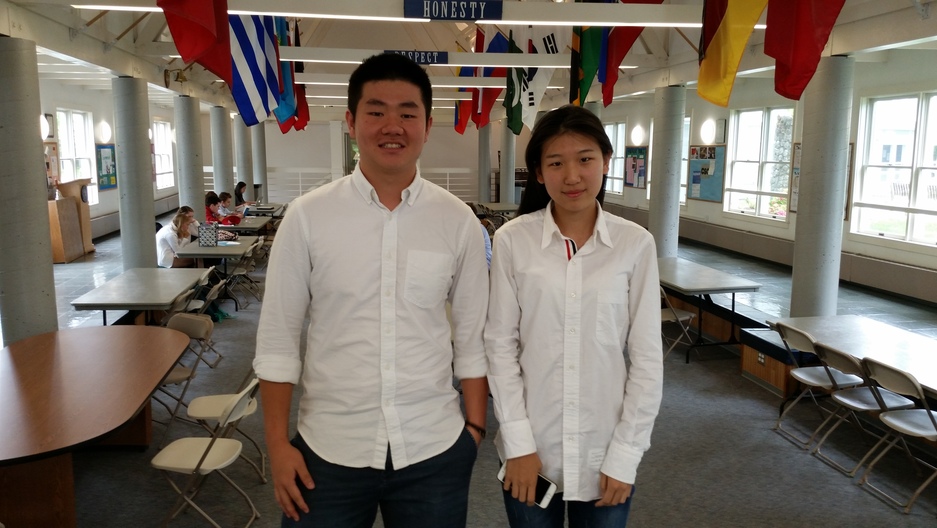 That's the case for many students coming from other parts of the world to the United States, including China. And some of these students are heading to newer places — not to New York City or Los Angeles — rather to private schools like Cape Cod Academy in Osterville, Massachusetts.

Osterville is in one of the least diverse parts of the state but, today, you will hear Mandarin in the halls by students like Yunshu Zhang, who goes by Tony. But his first days were not easy. He says he didn't understand the dress code at first day. "I had no idea that I had to wear a collared shirt," he says.

And he felt self-conscious because of his haircut. “It was like a mullet,” he said. “Most kids thought I would bully them.”

He also had to get used to being independent thousands of miles from home. “You are in charge of everything that you own, your money, your cell phone, your studies, your future,” says Zhang, who moved to the US from Guiyang.

It took him a few months to get used to life in a small town, where just 1 percent of the locals are Asian and driving is a part of life.

In the past five years, Cape Cod Academy has brought dozens of Chinese students to the United States, with help from recruiters in China. Zhang says he traveled to several overseas schools before he found the right fit. “After all this traveling, I felt like here is my future,” he says.

Cape Cod Academy started enrolling Chinese students five years ago. This year, there are 27 students from China and 70 have applied for just five spots in the next freshman class.

Joe Remillard, who manages the school's international program, says most students live with local families through a home-stay program. In fact, one of them is in Remillard's own home. “My wife and I had always wanted to travel with our own kids,” says Remillard. “When we heard of this opportunity, we loved it, because then we could bring the world to our table.”

Of course, cultural exchange comes at a price. Private US high schools, like Cape Cod Academy, cost tens of thousands of dollars per year, in contrast with Zhang's high school in China, which was affordable. “In order to have everyone taught in China, we make the class extremely similar, the price is very low,” Zhang says.

Chinese parents pay around $45,000 per year to send their kids to Cape Cod Academy. That includes tuition, housing and extra fees for visas and language classes.

“We used to see a lot of CEO children,” says Alexandra Tolischus, the school's head of admissions. “But now we see families with incomes that aren't quite so high.” She adds that China's tradition of one child per family may make parents more willing to invest in children.

Meantime, students from China grapple with homesickness and language barriers. Ziqi Zhao, who goes by Catherine, struggled at first because her English classes in Beijing did not emphasize conversation. “We know how to write, how to read, but there's not too much opportunities to talk.”

Granted, it's not impossible to find Chinese culture in Massachusetts, especially since Boston's Chinatown is just a little over an hour away from Osterville. But Zhao misses the little things, like traditional noodles and dumplings.

Once a week, some Cape Cod Academy students order Chinese food from a local restaurant to raise money for the student government. But the Chinese students here don't seem especially interested. It doesn't look much like the food that they grew up eating.

“They put too much oil in it,” Zhang says.

“I would only take the fried rice,” adds Zhao.

But she doesn’t seem to mind the lack of authentic cuisine. She’s taking the long view and hopes to study piano at Boston’s Berklee School of Music.

Zhang wants to major in economics and education at Brown University. After, he says, he wants to go back to China and work on the education system there.