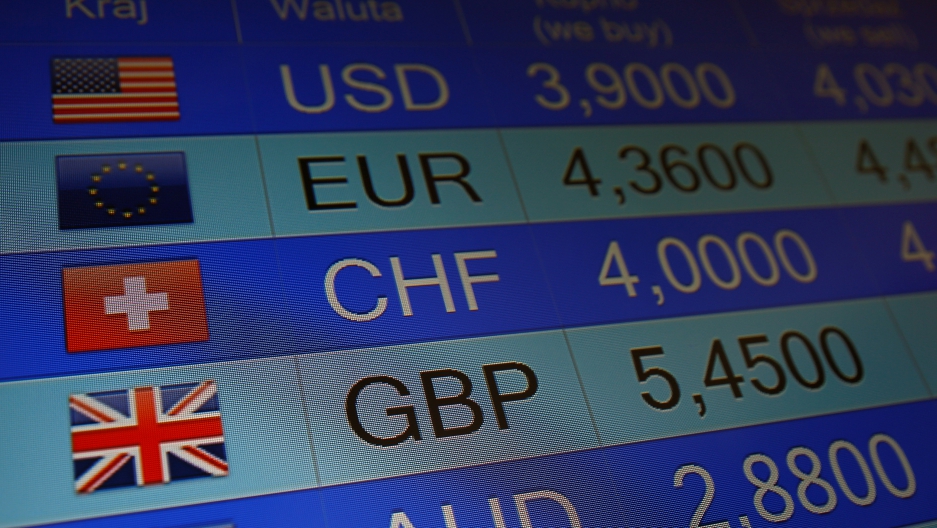 Rates of currencies, including British Pound, are displayed after Brexit referendum on an electronic board at a currency exchange in Warsaw, Poland.

Think of the European Union as a club, a club with economic benefits.

“A single market is something we don’t even think about in the United States. But a single market allows us not to have to pay extra tariffs or customs duties,” explains Michelle Egan, a fellow with the Global Europe program at the Wilson Center in Washington.

“It means that we can trade across borders, trade across markets and have ease of currency transactions. So it allows us also as consumers to have more choice.”

Other benefits being in the EU club include labor mobility.

“If people are looking for work, they can move across borders and they don’t have complicated visa requirements,” said Egan. “If you’re a doctor trained in Germany, you have the opportunity to practice in another European country.”

That’s good for that doctor who wants to relocate. But a lot of Brits felt this free movement of labor was also taking away jobs in the UK. And so now, Britain could soon begin its two-year withdrawal process from the EU.

“If you like, think about it first as a divorce,” Egan said. “And then after the divorce you need a settlement, and the settlement is where the terms of trade will come in with the EU.”

And what would that look like? That’s an open question, said Egan, who is from Northern England. Would Brits pay tariffs to sell products in Europe? And how would the UK negotiate new trade deals, already in existence, with more than 50 countries?

That won’t be easy, said Robert Kahn, a senior fellow for international economics at the Council on Foreign Relations.

“These agreements are achieved through a complex set of horse-trading. And in each of these cases, it’s quite possible that the efforts to try and recreate, raise up objections, vested interests, and the like … negotiating these agreements can actually be pretty challenging. It doesn’t mean it can’t be done,” Kahn said. “But it will come at a time of global challenges and risks.”

That’s what’s facing the UK today. What about the EU? It’s losing one of its economic pillars, Europe’s second-largest economy behind Germany.

Domenico Lombardi, with the Canadian think tank CIGI, said EU leaders could make things difficult for the UK to send this message: “You’re not a member of the club because you voted to leave the club.”

EU leaders are concerned about other countries flirting with the idea of leaving the club, countries like France and the Netherlands.

So, that’s what’s going on in Europe. What about the US, and its trading relationship? Is the stuff Americans buy from the UK going to cost more?

“I would think in the near term it’s going to cost less,” Kahn said. “We saw a pretty dramatic move in the [British] pound.”

The pound fell to a 30-year low overnight. And Kahn says the Brexit vote could very well weaken the euro, too.

“It probably means European goods will be cheaper [for US consumers]. Europe will be a cheaper place to take a vacation,” he added.

But there’s always a tradeoff: A strong dollar means that US exports could become less competitive. And that could hurt the US economy. Some economists are warning of an increased chance of another worldwide recession.

“Because this is a unique situation,” said Lombardi. “There is no real precedent for this. It’s really impossible to make a fair prediction, because the past is not of any guide.”

Like the rest of us, economists are watching as history is being made.