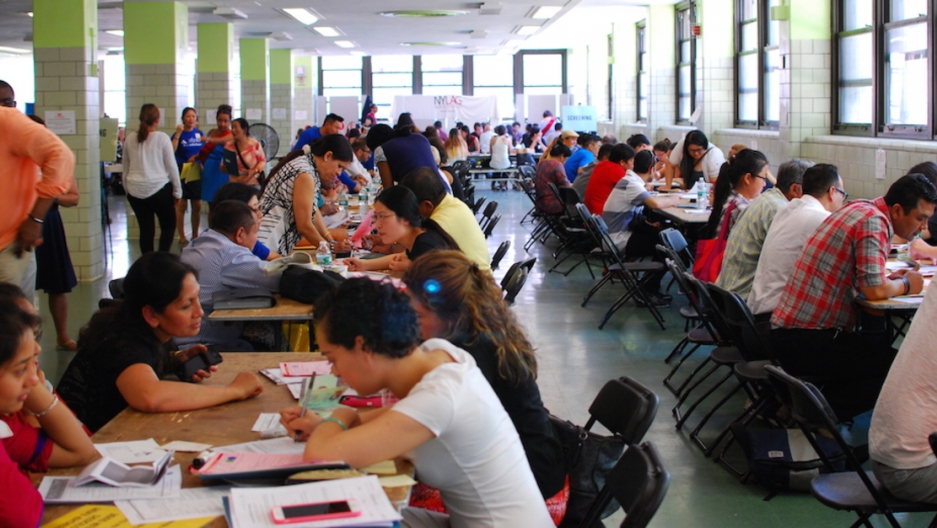 Nepalis register for Temporary Protective Status, which allowed them to live and work in the US after a devastating earthquake back home, at a clinic in a Queens high school in Aug. 2015.

When Nepal was hit by a devastating 7.8 magnitude earthquake in April 2015, Rajesh Shrestha happened to be outside, walking with his sister. His leg was hurt by rubble from a collapsing wall, but he survived. His mother was still at home, just across the street.

She was crushed when the roof of their house collapsed, one of more than 8,000 people who were killed by the earthquake and its numerous aftershocks.

Two months later, Shrestha was working at a sushi restaurant in Brooklyn, where he was staying with a friend. He came on a tourist visa but was able to start working legally because, soon after he arrived, Shrestha was one of thousands of Nepalis who benefited from Temporary Protective Status, or TPS. It's a Department of Homeland Security program that allows people from countries that have had disasters to stay in the country and work legally. The money Shrestha sent home every month became a lifeline for his family struggling to make ends meet in a county where the recovery process has been hampered by bureaucracy, political instability and economic turmoil.

Now, he worries that lifeline may be in danger.

The TPS granted to Nepali immigrants in the aftermath of the quake is set to expire before the end of the year and he, like many Nepalis, worries that he will no longer be able to provide for his family if it isn't extended. In March, he visited Nepal and found that his family home in Kathmandu was still in ruins and that his two brothers, sister and niece still very much needed the money he sends them.

“I am worried. It’s very important to support my family. Not only my family, but my country also,” Shrestha says.

Rajesh Shrestha, who works in the US under Temporary Protective Status, stands in front of his home in Nepal in March, 2016. A year after a devastating earthquake, recovery is slow in much of the country.

Adhikaar, a Nepali community organization based in New York, is launching a campaign to push for the renewal of TPS for Nepali immigrants. It kicked off today, with a coordinated social media effort on Facebook and Twitter under the hashtag “#tps4nepal.”

"The recovery efforts in Nepal have not gone at the pace even we would have expected. It will take a long time for the country to recover,” says Luna Ranjit, executive director for Adhikaar. “It is important for our community to be here to support our friends and family, as well as the country through remittances.”

More: How to help Nepal after the earthquake

There is precedent for TPS status to be renewed for countries that are still in turmoil. This March, the government renewed TPS status for Guinea, Liberia and Sierra Leone for six months. A more direct comparison might be with Haiti. TPS was granted to Haitian immigrants in the wake of the 2010 earthquake and has been extended several times, most recently in January, when it's expiration date was shifted to July 22, 2017.

“We have seen TPS be renewed multiple times for many other countries. We believe that it is possible,” Ranjit says.

According to US Citizenship and Immigration Services spokesperson Daniel Cosgrove, a decision to extend or terminate the designation would come at least 60 days before the end of Nepal’s current TPS period, which expires on Dec. 21. The Department of Homeland Security will evaluate "the country’s conditions, in consultation with other government agencies, to determine whether the conditions that prompted the original designation continue to be met."

Nepali immigrants are a relative small population, but one that has grown dramatically in the last few decades. Just 7,858 Nepalis were recorded in the 2000 US Census. The number increased to 51,907 by 2010, according to an analysis by the Asian American Federation and South Asian Americans Leading Together (PDF). The growth prompted the census to create “Nepalese” as its own category in 2011, breaking it out from the more general “Other Asian” group.

Part of what propelled the initial growth, according to Ranjit, was migrants fleeing the country during the Nepalese civil war. It lasted a decade, from 1996 to 2006, and claimed the lives of about 17,000 people. While the influx wasn’t formally recognized as refugees by the US, they came none the less and established communities in New York City (principally in Queens), California and Texas.

Once the community was established, families brought relatives over and the process of chain migration kicked in, according to Ranjit.

“The community grew rapidly, it changed really fast. It used to just be single migrants who left the country. Then more and more people started families here. Also, people were bringing back their parents. It became much more multigenerational,” she says.

Adhikaar has both pushed for TPS and worked to get people to sign up. The process, Ranjit says, rallied and unified the Nepali community like few issues had before. They held clinics and workshops in Queens, and organized remote videoconference workshops for groups in other areas of the country using Skype. Ranjit says they reached about 800 people in New York and 1,500 all together. According to Cosgrove, the USCIS estimated 10,000 to 25,000 people would be eligible for TPS when Nepal was first designated.

“The Nepalese community was relatively new, so this was the first time they came together for a campaign,” Ranjit says.

And now, with “#tps4nepal” they are rallying again.

Many of the Nepalis who benefited from TPS arrived well before the quake, but their new status allowed them to work legally and return to the US even if they traveled to visit family at home in Nepal.

Ramba Regmi, 53, arrived in the US in 2000. She worked as an undocumented immigrant until she was granted TPS last year. This March, she went back to Nepal and saw her husband and family for the first time in 16 years. Her children were grown, and she met her grandson for the first time.

Her family’s house in Kathmandu was badly damaged by the quake, so they built a new, temporary house nearby. Regmi works in nail salon in Brooklyn, and her family depends on the remittances she sends home. She is hoping TPS for Nepal will be renewed.

And she knows the stakes.