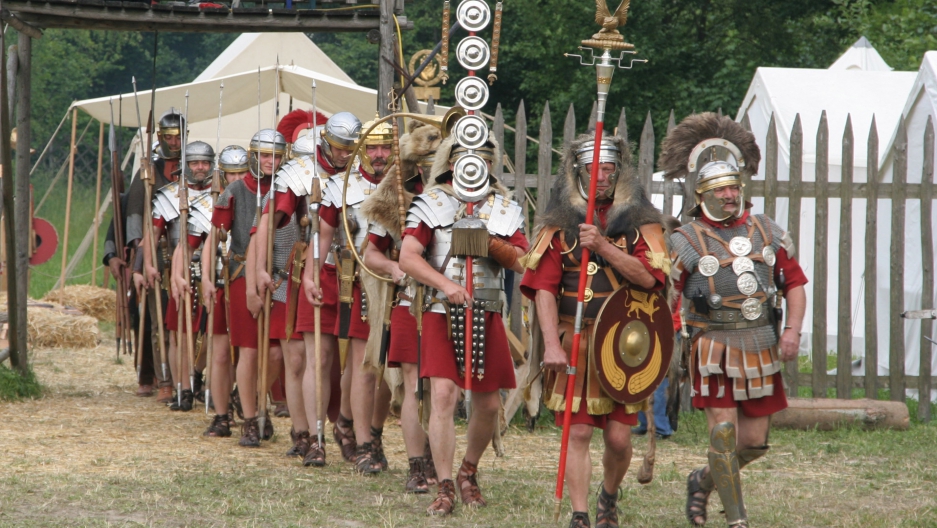 This isn't the first time Britain has moved to quit a united Europe. That honor goes to the Roman province of Britannia in 286 A.D. The Brits broke away from Roman control and set up their own independent empire, which lasted a decade.

At that time, most of Europe was united under the Roman Empire, and Britain enjoyed all the benefits of free trade and a single currency, free movement of people, and of course Roman roads, sanitation, justice and security. So what happened to make these ancient Britons quit such a comfortable setup?

Well, it wasn’t so comfortable. Taxes were high and demands for labor were pretty intense. Roman Europe was also evolving into a proto-feudal society, which many poorer people found oppressive.

Then add into the mix a dramatic degree of personal politics and individual survival. There was this really interesting cat called Carausius. If you're a Game of Thrones fan, he might remind you of Sir Davos Seaworth, played by Liam Cunningham. Carausius was a low-born sailor, who clawed his way up into the nobility and high military command purely through his abilities.

Carausius was an unlikely champion of British independence: One writer, Alan Clayson, has called him "a probable hybrid of Al Capone, Idi Amin and Long John Silver."

Carausius became admiral of the fleet based in Britain; a fleet that the Romans needed to protect themselves from sea raiders (before the Vikings, there were the Saxons and the Franks). Carausius also helped save the butt of the Emperor Maximian in battle in Gaul.

So it was this man, Carausius, who pushed for a Brexit. Despite being Maximian's favorite naval commander, Carausius was found guilty of corruption. Maybe he was framed by rivals, or maybe he did succumb to temptation; it’s not known. But what is known is that Maximian ordered him to be executed. Rather than submit, Carausius declared himself emperor of Britannia.

And the people followed him.

He definitely appears to have appealed to native British dissatisfaction with Roman rule. Carausius was not a true Roman, but a Romanized Celt, with strong local ties on both sides of the English Channel. It's not absolutely clear if he exploited latent Celtic nationalism against Roman rule, since he was also able to recruit Germanic tribes, especially the Franks to fight for him as well.

A Carausius coin, minted in Londinium (London). On the reverse is the lion symbol of his legions: Legio IIII Flavia Felix.

But from the coins he issued we know he was good at propaganda. Many of his coins include slogans like "Liberty," suggesting he tried to convince his people he really was fighting for freedom. (That’s not super-convincing, since earlier in his military career he had crushed slave and peasant revolts in Gaul.)

On other coins he called himself “Restorer of Britain” and “Genius Britanniae, or Spirit of Britain.” On other coins, though, Carausius stressed his Roman culture, by including quotes from the Roman Shakespeare, the poet Virgil. It’s not clear if he had greater ambitions to march on Rome, or whether he simply wanted to carve out his own patch.

Clearly, many of these ancient Britons were unhappy with excessive demands and regulations coming from the continent.

It’s not surprising that the navy supported him, since he had built up the navy itself and most of its leaders owed their position and wealth to him. But the army’s enthusiasm is a puzzle for historians.

This kind of revolt was not unprecedented in the late Roman Empire, when mighty pro-consuls made a play for local or supreme power. Usually they won control of the local legions through a mix of patronage, victory and plunder, but it’s not clear if Carausius had won their support through these more traditional means.

Somehow he pulled it off.

Some suggest that if the allegations of corruption were true, then maybe he simply bought the loyalty of the legions.

There is also the possibility of some kind of Celtic cultural link, since several of the army units who went over to him were recruited in Gaul and Britain.

So in terms of comparison to the potential Brexit of 2016, it’s not exactly the same.

Unlike the European Union leaders in Brussels, the emperor of Rome was determined, and able, to use force to re-unite Europe. But thanks largely to geography, Carausius and his successor were able to hold out for 10 years. They established an effective government, raising taxes and issuing coins, building roads, milestones and forts. He won the support of the merchant class. He sought peace with his "brothers" — the emperors of Rome, but failed.

One lesson for modern times might be how geography may have played a role. Perhaps the nature of Britannia being an island helped people think that they were able to go it alone. The population of the UK is completely different, but I wouldn’t be surprised if that stubborn island spirit — that sense of difference — is playing a role in the vote in 2016.

So what happened to Carausius himself? In keeping with the Game of Thrones theme, he was murdered by his internal enemies seven years later, in 293. A stone has been found marking his grave in North Wales.

Carausius was replaced by his finance minister, Allectus, who assumed effective control of the rebel empire. He was even more of a Celto-British nationalist, evidenced by his decision to drop the veneer of Roman culture affected by Carausius.

Allectus lasted until the Romans were able to sneak an army past his fleet and invade Britannia itself in 296. Allectus was defeated and killed in battle, southwest of London.

After taking Londinium, the new emperor immediately struck a new coin to replace the ones saying "Liberty!" with his name and the phrase "restorer of the eternal light" (meaning the eternal light of Roman power).

It'll be interesting to see what new coins the British mint now.