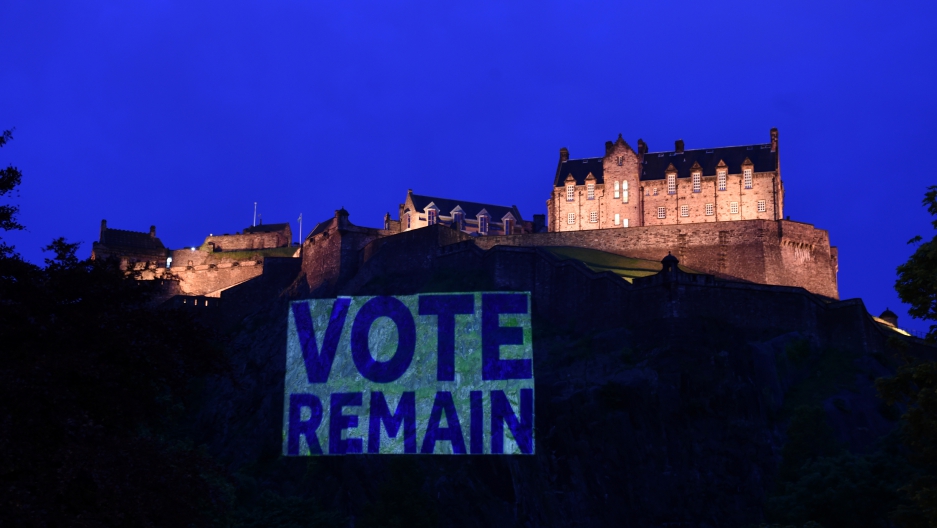 On Tuesday, Edinburgh Castle rock was illuminated with a sign to "Vote Remain" in a show of support for the campaign to remain in Europe ahead of today's EU Referendum. June 21, 2016.

The people of the UK vote today on whether to keep their European Union membership. It's a historic vote. But it's not the only big referendum to be held in Britain over the last few years.

In 2014, the people of Scotland had to decide whether to remain part of the UK or to go it alone as an independent country.

In the end, they decided pretty conclusively to remain.

One of the big factors in that result was the fact that the UK was a member of the EU. It wasn't clear whether Scotland would be allowed to immediately re-join the bloc on its own terms as an independent country.

So if the UK votes for a Brexit, a lot of people in Scotland could be pretty upset, since they ended up staying in the UK due to its EU status. There's even been talk of another Scottish independence referendum if that happens.

“If we get put out of Europe … then there will be another referendum. And we will definitely have a home run,” says Janey Godley, a comedian from Glasgow who supports Scottish independence. “There are even some Scottish people who will vote for an exit, so that we will be forced into another referendum. There is tactical voting going on.”

Whether or not that is the case, the polls have shown a huge lead in Scotland in support for remaining in the EU throughout the referendum campaign. This stands in contrast to the rest of the UK, where it has been too close to call.

Political commentators have suggested this is because the political landscape in Scotland is set further to the left than in the rest of the UK.

According to Godley, who is voting to remain in the EU, the campaign has been dominated by negative conversations — particularly around immigration. But she feels there is a positive case to be made, particularly in Scotland.

“Immigration has been the elephant in the room for the Remain camp,” she says. “But I think, from a Scottish perspective, that immigration has been handled very well. We were the first people to take in many Syrians. ... There’s an undercurrent vibe that the Brexit campaign have run, which is basically based on racism. They have put up posters of thousands of immigrants standing at the border. … People say that there aren’t enough hospital beds. And there weren’t enough hospital beds last night … but that’s because there were drunken Scottish white people fighting each other all over the corridors.”

And from a personal perspective, although Godley is a supporter of Scottish independence from the UK, she also feels like a European.

“I’ve got so many identities. I’m British. I’m Scottish. I’m European. I’m a woman. I’m a stand-up comedian. I’m a Glaswegian,” she says. “I absolutely want to stay.”