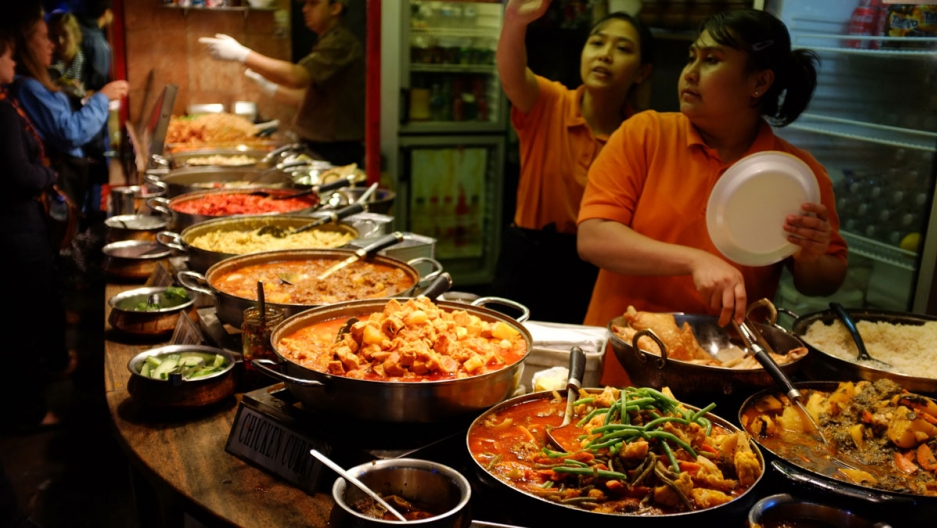 Really? Is curry a part of the debate over whether the United Kingdom should leave the European Union?

Here's one way those in favor of a “Brexit” are hoping to drum up support by using the UK's national dish.

Owners of some of Britain's popular curry houses have complained that strict EU immigration rules have made it tough to hire new chefs from Bangladesh and India. Curry restaurants in Britain say they generate more than $6 billion annually and employ more than 100,000 people, and more than a few restaurant owners say that a Brexit could provide a solution to the industry’s chef shortage.

“Over the last four or five years, the Indian restaurant sector has been in a lot of turmoil,” says Jeffrey Ali, the director of his family's award-winning restaurant Le Raj. “We’ve been having a sort of staff shortage crisis since the last 10 years or so.”

According to The Guardian, as of April, about 600 curry restaurants closed in the previous 18 months because of the chef shortage.

“Businesses such as mine, they have to have something which is called a Tier 2 Sponsor License,” says Ali. “What this means is that I can have someone come in from outside of the EU to try and fulfill a vacancy, such as a chef. In the past, bringing in a chef from abroad wasn’t a simple thing, but it wasn’t impossible either.”

Under current rules, in order to get a visa, non-EU chefs must have at least five years' experience and be paid at least $42,000 a year after deductions for accommodations and meals. That above-average salary can be difficult for small curry houses, new restaurants and struggling establishments to provide. Additionally, according to the Wall Street Journal, these non-EU chefs are also barred from working in restaurants that offer takeout.

“Now, over time, these regulations have been getting more and more stringent, so being able to recruit someone from within the EU to fulfill a vacancy in a restaurant is impossible,” Ali says. “And a restaurant such as an Indian restaurant — you need to have someone who understands the spices and cooking techniques. Finding someone from Britain, unfortunately, is quite close to impossible.”

The pro-Brexit camp has tried to use the British curry industry to ramp up support with the social media campaign campaign #SaveOurCurry.

“We employ about six or seven Eastern European staff to work in our kitchen,” says Ali. “We’ve had to do so because we can’t find people who are eligible to work in our kitchen from outside the EU. So these people, they come in and they’re actually economic migrants, so they don’t come in to forge a career in the restaurant industry — they come over to earn a certain amount of money that they want to, and then go back to their respective countries. It’s great because they’re very hard-working people … But the labor turnover is very high.”

Ali says UK government ministers need to fix the nation’s immigration system so that businesses can have more hiring options. And he believes a Brexit could help.

“Currently we have about 350,000 migrants coming into the UK every year, and about half of those people are from within the EU,” Ali says. “If we were to leave, of course this number — 350,000, half of which can come in freely without any restrictions — the number would dramatically go down ... If we left the EU, perhaps a minister, now that immigration’s gone down, they might be able to look at our industry and say, ‘OK, now we have the scope to do something [on immigration].’”

Brexit or not, the UK’s “love affair” with high-quality curry will press on, and Ali hopes that something can be done to aid his industry.

“Indian masala is the nation’s favorite dish,” he says. “If I started to try and supplement that with people who don’t understand the food, then the business wouldn’t run and the customers wouldn’t come. This vote could have a big, big outcome either way — whether we stay in or whether we leave, our restaurants will be affected in a big way. Hopefully our leader, [Prime Minister] David Cameron, will find a way to support us.”

A version of this story appears on PRI's The Takeaway, a daily radio program that invites you to be a part of the national conversation.