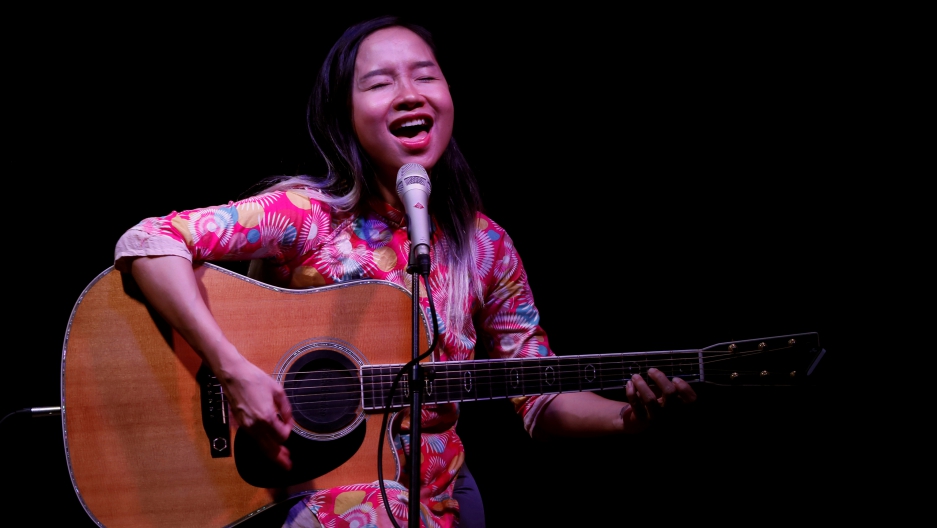 Writer Tamar Charney argues that there is something wonderful about singing along to music in languages you do not understand. Pictured: Vietnamese singer Do Nguyen Mai Khoi at a performance in Hanoi in May.

I was speeding down a backroad in rural Michigan singing along to an album by Mammut. That’s when I smacked into the absurdity of what I was doing.

Mammut is an Icelandic band that sings in Icelandic. It’s a language I can’t speak, read, or understand a word of. Truth be told I was doing a terrible job of even imitating the sounds as I sang along. But damn, I was sure pouring my heart into these words I knew nothing of.

A few years back I’d looked online to find a translation of the lyrics or even just the words of the songs in Icelandic in the hopes that Google Translate could make some sense of them for me. But no luck. An obscure band from an obscure country just doesn’t get the attention of Lyrics A-Z. I was left with no choice but to be content with my belief the songs were the eloquent expressions of the frustrations and longings the music made me assumed they were.

Truth be told I listen to a lot of music I can’t understand a word of. I don’t understand Hindi, Portuguese, Arabic, Spanish, nor Russian. Even songs in languages I’ve studied can be hard to follow. Yet knowing the meaning of the words to a song can sometimes be overrated. I realized this as a kid the first time I was taken to an opera performance that had surtitles.

I’d just assumed from the music that all those Italian and German arias my father listened to had to be poetic descriptions of passion, lost love, and betrayal. But, the seeing the translation above the stage made me realize is wasn’t much better than Elmer Fudd singing the “KILL THE WABBIT! KILL THE WABBIT! KILL THE WABBIT!” in “What’s Opera Doc.” Opera was so much better when I thought it was way more profound than “spear and magic hewmet” — when it was something I could project my preteen emotional drama onto.

Perhaps that’s what I like about all my tunes in all those languages. Because maybe, all those songs mean what I need them to mean. Particularly now, when there’s so much to understand that’s beyond comprehension from the latest mass shooting in the US to the Syrian migrant crisis to the girls taken by Boko Haram and on and on and on.

For years I struggled to grasp the essence of everything. It’s one of those human traits, we somehow have to find meaning in everything, even when there is none to be found. Each time something unfathomable happens, each of us will find a way to make sense of it, to comprehend enough of it to go on, even if our interpretation is just that, our interpretation. Because try as we might, things are always seen from each of our unique points of view, even as we yearn for universal truths and common understanding.

But honestly, at this point I don’t want to know what any of those Mammut songs are about. I need them to remain brilliant pieces of Iceland poetry in my mind. Somehow it just helps to race across Michigan’s countryside singing along to words I’ll never understand, in a world I’ll never understand.