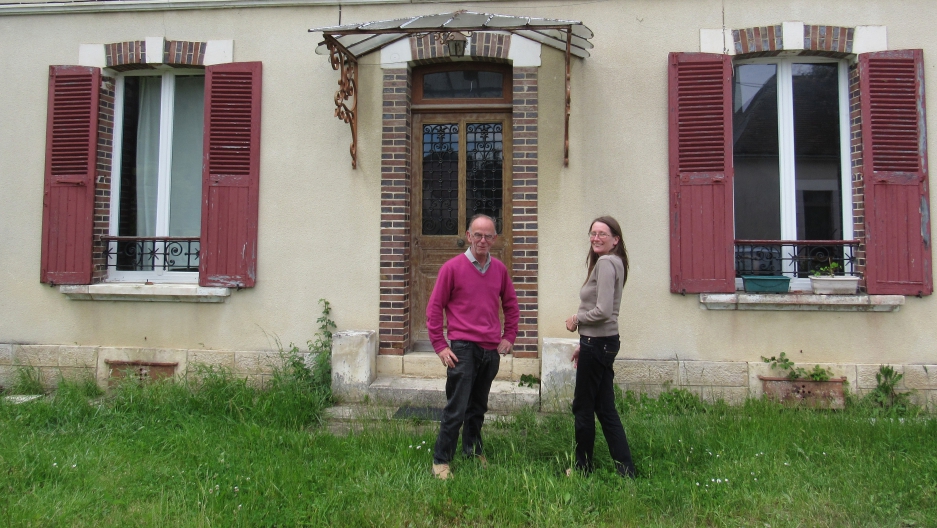 British citizens Paul and Melanie Ryan are residents of France. They plan to apply for French citizenship if Britain votes to pull out of the EU.

Thursday could prove a fateful day, and not just for the British within the UK.

Voters across Britain will head to the polls to decide whether the country should leave the European Union, or stay in it. Brits who live abroad are also more than a little on edge.

Take Melanie and Paul Ryan. They’re British citizens who live in the French countryside. They teach English classes out of their home in the small village of Égriselles, nestled in green fields of Burgundy.

They have settled in nicely, in spite of the legendary rivalry between France and England. The Ryans bring up the fact that the French and British call each other names based on stereotypical culinary specialities. “You know, they do call us ‘Rosbif,’” Melanie says. And what do Brits call their neighbors? “Frogs.”

But these particular Rosbifs seem to have made a pretty good life among the Froggies. As European citizens, they enjoy the same rights and freedoms French people do.

“We can register our cars, we can buy property, we can even, if necessary, claim social security,” Melanie says. “We get the same child allowances, child benefits.”

However, access to those perks could change if Britain goes for “Brexit,” as the proposed British exit from the EU is popularly known.

Melanie and Paul are just two of an estimated 1.2 million Britons living in other parts of Europe. If the referendum goes in favor of leaving the 28-member bloc, citizens like them may lose their right to work and reside freely anywhere in the EU. Or, it’s possible they’d be grandfathered into the EU system they already enjoy.

That’s part of the frustration: There’s so little people actually know about what would come after an unprecedented EU exit.

“Nothing has been made clear as to what position we then become in these societies that we’ve been living in and contributing our taxes to, our social charges,” Melanie says.

But there’s another aggravation. Brits like the Ryans, who left the UK more than 15 years ago, do not even get to vote in the referendum. They may cast a ballot in France’s municipal polls or European elections — just not in their homeland.

This is enormously frustrating for the Ryans.

“Now OK, if it was a national election, I could understand why,” says Paul. “We don’t live in England anymore, we haven’t for a long time, why should we have any voice in what the government is or should be? However, this affects us directly and personally, every one of us, and nobody has given us a word in it!”

“This affects us directly and personally, every one of us, and nobody has given us a word in it!”

Paul says he’s not too worried that they would lose their home or business, which are bona fide French investments, and he thinks his bicultural family will be fine. But Melanie does worry about health care.

“Just in simple terms, you know, social security or hospitalization or going to the doctor’s,” she says. “I’ve got a card that allows me to have medical treatment as and when I need it, that's because of the European convention. There are so many elements of our lives that are interconnected because of the EU that I think to negotiate our way out of that is going to take an awfully long time.”

The Ryans have children, grandchildren, friends, a house and a business right here, so France is really their home now. And you could tell, during a recent visit, how much they feel at home here.

Melanie is a Londoner who’s passionate about history. She says the house dates back to the 18th century.

Paul is the musician in the family, and judging by the dozen or so guitars lining the living-room wall, a bit of a collector too. It's a taste he acquired growing up in Liverpool. Paul says he just likes to play the guitars; but Melanie jokes that her husband “suffers from ‘guitar acquisition syndrome.’”

They have created a good life in France, but they never thought it would be necessary to become French — until now.

“We so far have not chosen to take French citizenship because we consider ourselves European,” Paul says. “Why would you need a different nationality? You’ve got your nationality, it says on your passport it’s European anyway, like your driver’s license. And should Britain decide to pull out of the EU, it would be our way of us nailing our colors to the mast. We will become French citizens as long as we’re allowed to.”

The Ryans say they hope common sense prevails and that British people will vote to stay in the EU. But if they don’t, they have good neighbors, those Froggies.

“A number of them have said: ‘Well look, when they come in to deport you, just come around our house, we’ll hide you!’” Paul laughs. “They say things like that … ‘We’ve got a spare room, you can stay there, we won’t tell anyone.’”

For now though, the Ryans will not let uncertainty cast a shadow on their lives. One of their daughters is getting married this week at a nearby cathedral. Melanie says it promises to be a fairy-tale French wedding.

Paul has prepared a song for the occasion: the classic Lou Reed tune “Perfect Day,” with reworked lyrics. He’ll play it on one of his many, beloved guitars.