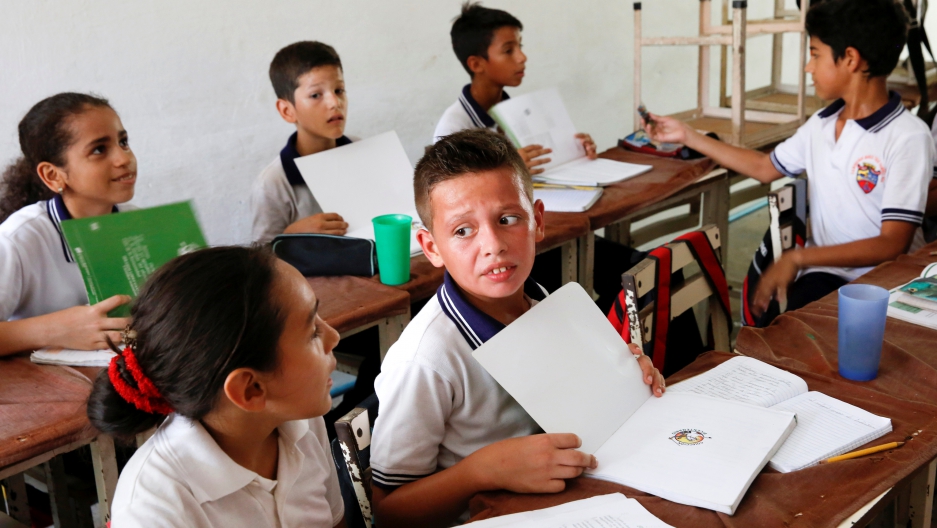 Children use their books to fan themselves during a class at an improvised classroom in a garage of a house, which is part of state school Monsenor Marco Tulio Ramirez Roa, in La Fria, Venezuela, June 1, 2016.

Civil society is rapidly deteriorating in Venezuela. Once a prosperous oil producer, the nation is slipping into a state of chaos that is beginning to resemble Somalia. And things just keep getting worse, says Hannah Dreier, an Associated Press correspondent in Caracas.

“What we’re seeing right now is really the start of a humanitarian crisis,” she says. “What’s so strange and so unique to Venezuela is that they won’t take any international aid.

"I have readers who write to me and ask, ‘How can I help? I really want to do something — to give some money; some food to these people.’ The truth is they can’t, because all of that kind of help is prohibited. You can’t give these people medicine, you can’t give people food, you can’t even just give people $100, which would make a huge difference in anyone’s life here. ”

Food riots are breaking out daily, rolling blackouts are becoming a regular occurrence, and basic medical supplies are running out. As instability cripples the country, some fear that the Western Hemisphere will soon see its own refugee crisis.

“You hear stories almost daily now of people drowning trying to cross through the [border] rivers,” Dreier says. “People are dying on the bridge that they let some very sick people use to walk between [Venezuela and Colombia]. Airlines are also fleeing the country — right now it’s very hard to get a flight out. ... It’s very isolated, and people who want to leave can’t because they don’t have the money to buy a plane ticket. Almost everyone I know wants to leave.”

International news out of Venezuela is also getting harder and harder to come by as some media outlets pack up. Those who have stayed are also facing danger.

“I recently had a group of armed gangs tell me that I needed to leave the neighborhood because I was a gringo imperialist,” Dreier says. “It can feel threatening, and there are also some issues with getting people accredited … Physically getting information from Venezuela to other countries has gotten very hard. There’s no international calling anymore so if something happens, I can’t just call up my editors. It also means that if you’re a Venezuelan — a lot of people have family in Colombia and the United States, and you can’t make those calls anymore.”

For the first time in years, Dreier can't find enough food. "That's really saying something because usually the problem is that food is too expensive for people to buy, but there's enough of it. Right now, even me with my access to dollars, even going to the black market, I can't find a lot of the things that I want."

The nation's educational system is also beginning to completely fail. Venezuela's 7 million schoolchildren have missed about 40 percent of their academic year, primarily because there is no one there to teach them. Like other civilians, educators must wait for hours in food lines, and some have gone missing or have been killed amid rising vigilantism.

“The school situation here is so sad — that was really one of the crown jewels of the socialist revolution,” Dreier says.  “For years, schools were getting better and better, and it seemed like people really might escape poverty. But now, the estimates are that about 40 percent of teachers aren’t showing up — they’re in food lines and trying to make their own lives work. So you have these kids who risk their lives to get through the slums and get to their schools, and they show up and it’s like an all-day lunch hour — they’re just hanging out and waiting for someone to come teach them.”

At least 45 school cafeterias in Caracas have been robbed this year as the thieves search for school lunch supplies to sell on the black market. Dreier says the nation’s largest beer distributor has been taken over, too.

As the nation continues its downward spiral, activists are fighting to have a nationwide vote to recall President Nicolás Maduro from office.

“Polls show that a big majority of Venezuelans want him gone, but it’s very unlikely that the administration will let that vote go ahead,” she says. “Today, we have people who have to go and give their fingerprints to administrators to prove that they really do want to sign this petition to recall the president.”

A version of this story first appeared on PRI's The Takeaway, a daily national conversation. Additional reporting came from PRI's The World.