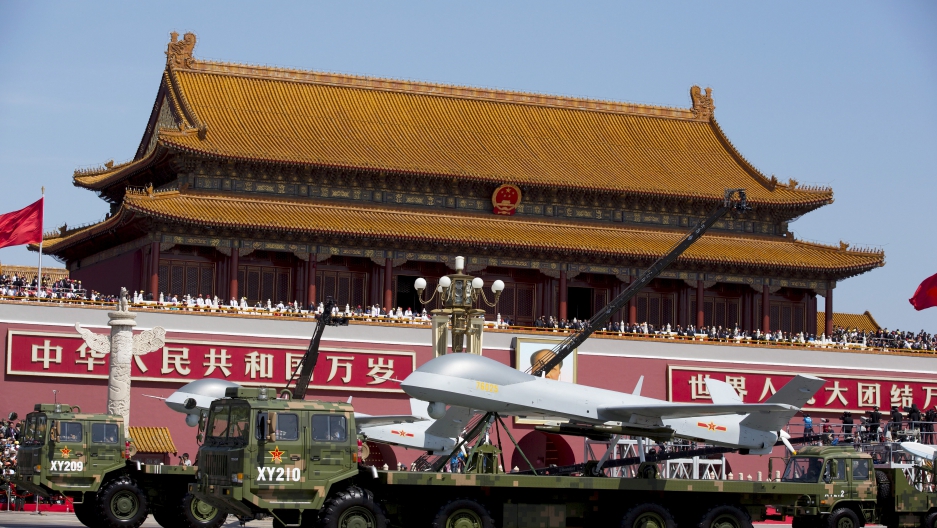 Military vehicles carry Wing Loong, a Chinese-made medium altitude unmanned aerial vehicle, past Tiananmen Gate during a military parade in Beijing on Sept. 3, 2015. Thanks to China’s state-run arms industry, these days almost any military can buy a drone with armor-piercing missiles.

In 2016, practically no nation is too impoverished or dysfunctional to acquire killer flying robots.

Case in point: Myanmar. The war-ravaged nation is now believed to own a dozen-odd drones armed with laser-guided missiles.

The assumed target of these sophisticated contraptions? Mountain-dwelling rebels who trudge through jungle mud with banged-up, black market M-16s.

This is the new normal in guerrilla warfare around the world. Far beyond Pakistan or Yemen, rebels scurrying around with cheap rifles can be blasted with satellite-guided bombs.

With the exception of Somalia, Myanmar appears to be the poorest nation thus far to acquire lethal drones, which are more affordable and available than ever. In fact, thanks to China’s state-run arms industry, almost any military can buy a drone with armor-piercing missiles — all for less than the price of a chic one-bedroom in Manhattan.

The model of Chinese drone that Myanmar purchases is likely cheaper than $1 million per unit, according to Anthony Davis, a security analyst with IHS-Jane’s, a defense intelligence firm that confirmed the nation’s drone acquisition.

“These are not prestige acquisitions,” Davis says. “They’re something that any military committed to the range of operations in the type of terrain that [Myanmar’s military] operates in would absolutely need.”

Myanmar, one of Asia’s most diverse and disorderly nations, is now widely hailed for entering a new era of democratic rule. That’s no small feat after five decades under military dictatorship. Following a November election, the army peacefully handed power to a party helmed by Aung San Suu Kyi, the world-famous democracy idol backed by the US.

Yet the power of Myanmar’s military has not vanished. Nor have its grisly jungle wars. The nation’s central plains — an increasingly hip, touristed hot spot — are indeed stable. But at the perimeter, the army is at war with more than 10 rebel groups — so many that most citizens are unable to name them all.

Myanmar hasn’t publicly confirmed its use of armed drones. But photos of the drones, posted to Facebook by a military officer, appear to confirm prior reports that the army had acquired them.

"Given multiple active theaters of operations in rugged terrain and porous, extended borders,” Davis says, “it would be remarkable if the Myanmar military had not developed a drone program.”

The nation appears to have first acquired simple surveillance drones back in 2004. But two or three years ago, it quietly acquired drones with serious firepower: a Chinese model called the CH-3A.

The fact that nations such as Myanmar can now blast guerrillas by remote control is owed almost entirely to China. State-backed firms in China have also sold armed drones at bargain prices to Nigeria, Egypt, Pakistan, Iraq and Saudi Arabia — and sometimes at a quarter of the price of American drones, which are only sold to close US allies.

Chinese drones, on the other hand, are offered to practically any army with a little cash. Beijing is hardly shy about its freewheeling desire to sell drones around the world. Its official press agency, Xinhua, promotes one Chinese model as the “AK-47 of drones.”

In other words: These weapons are deadly and affordable for all. 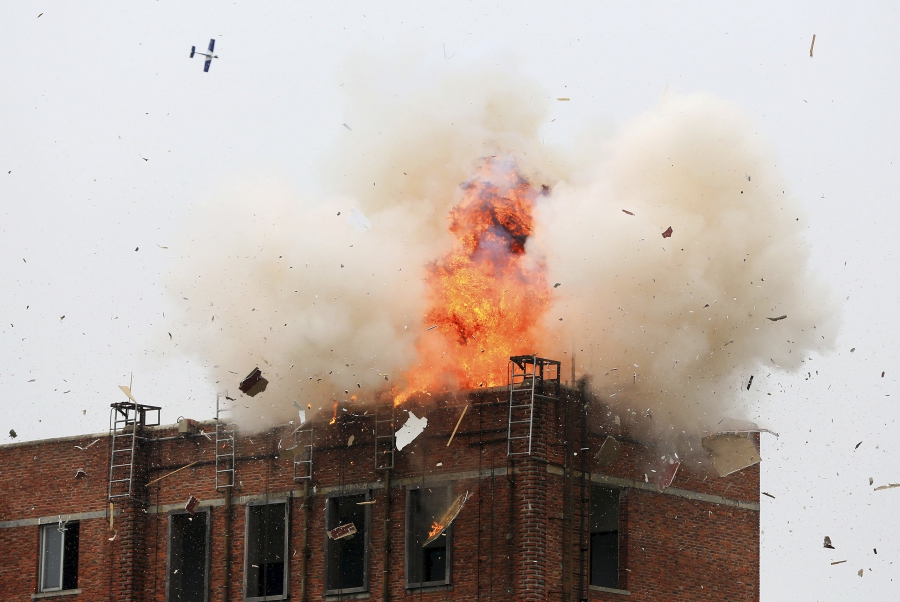 A bomb dropped from a Chinese military drone explodes on the roof of a building during an anti-terrorism drill in Foshan, Guangdong province, Sept. 29, 2013.

In an ad disguised as an article, Xinhua boasts that China’s drones leave targets with “no possibility of escape … terrorists, having little air defense firepower, will be unable to fight back.”

It’s currently unclear whether Myanmar has sent drone-fired missiles screaming into any rebel camps, but armed drones have circled over rebellion-prone hills. There is evidence, too, that the army continues to sporadically fire on guerrillas from helicopters and fighter jets.

Despite claims that the country is veering toward an era of peace, reports also indicate that government troops are still torching villages in rebellious areas — a time-worn tactic that helped brand Myanmar’s army as one of Asia’s most abusive.

Much of the army’s intel on rebels now comes from warlords and army-allied militias who help underpin the country’s billion-dollar meth and heroin trade.

Situated in the guerrillas’ heartland, these narco-syndicates are permitted to traffic drugs so long as they keep a watchful eye on rebels and help the army attack them when requested.

And now that drones fly above the heads of independence fighters — whose varied factions circulate through nearly half of the country’s terrain — a drone strike on rebels seems inevitable.

That will increase the potential for a village getting obliterated based on faulty intel or with little regard for civilian bystanders. Myanmar’s officers haven’t been known for their restraint.