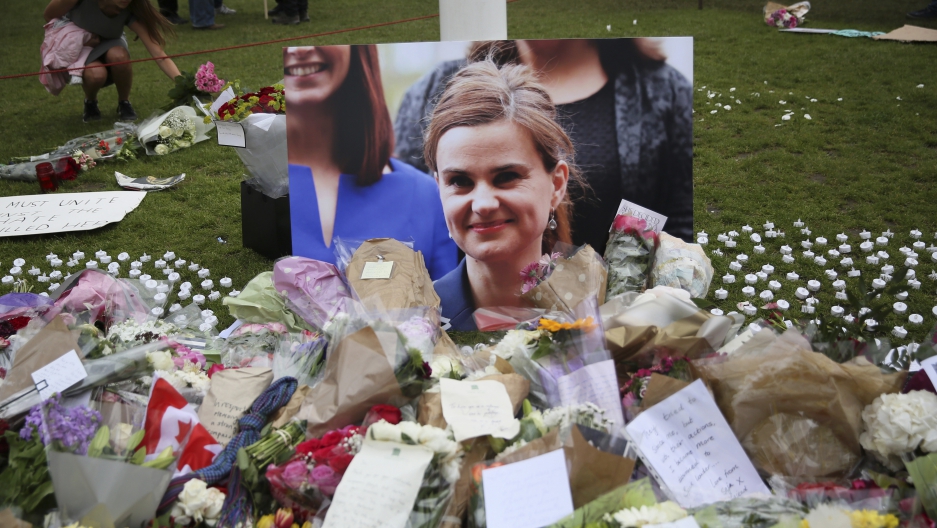 Tributes in memory of murdered Labour Party MP Jo Cox, who was shot dead in Birstall, are left at Parliament Square in London,

The tragic death of parliamentarian Jo Cox last Thursday may sway significant numbers of Britons to vote this week to remain in the European Union. Or it may not.

Cox was a vocal supporter of immigration rights and frequently advocated on behalf of child refugees. She was murdered Tuesday. The suspect being held in connection with her death, Thomas Mair, allegedly shouted "Britain first" before stabbing and shooting the 41-year-old mother of two.

Gary Younge, an editor-at-large for The Guardian, says ultimately it's hard to be sure, but the murder might make some Britons who'd wanted to leave the EU reconsider.

"It might make them think twice about 'What are we getting into here? Do I want to be associated with the kind of people who say that kind of thing?'" Younge says. "This gives a large number of people a pause for thought about whether the anomie that has emerged — some people talking about refugees as cockroaches and comparison to vermin and so on — whether that's the kind of place we want to be."

Campaigns on both sides of the referendum canceled activities in the days after Cox's murder. Now that they've started up again, Younge says to an extent they've toned down their rhetoric.

And although Younge thinks the advocates for remaining in the EU can point to added support in recent days, he says he doesn't want to "overstate the case." An estimated 10 to 15 percent of British voters are still undecided.

At the same time many "Leave" campaigners, Younge says, are standing firm.

"As monumentous and tragic as it was, I don't think that [Jo Cox's] death is going to change their minds," he says.

And Younge adds that no matter which side wins, the key issues won't be resolved by Thursday's balloting.