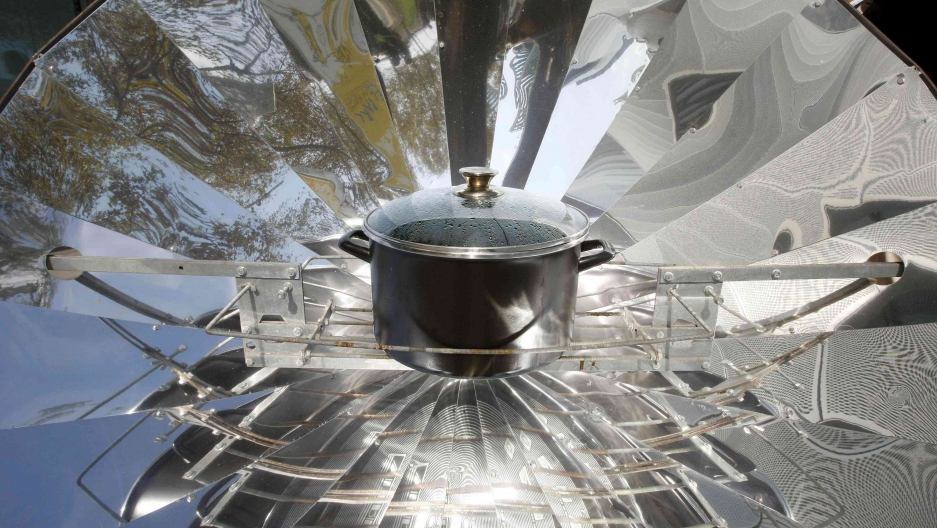 A solar oven is displayed at the IUCN World Conservation Congress in Barcelona October 7, 2008.

School might be out for the summer, but that doesn’t mean the science fun needs to stop. There are experiments that kids can try in the backyard all summer long.

Liz Heinecke, aka The Kitchen Pantry Scientist, is on a mission to inspire kids and parents to get their hands into some science by making it fun, inexpensive, and easy. She’s written two books, Kitchen Science Lab for Kids and Outdoor Science Lab for Kids, and makes regular appearances on Minneapolis area TV stations. She says putting together a summer science kit isn't difficult.

“You can never go wrong with baking soda and vinegar, of course. That's always a good starting place,” Heinecke says. “For outdoor science it's great to get a magnifying glass, some binoculars and duct tape always comes in handy.”

After getting kids some simple tools, the next steps, according to Heinecke, are to get them outside, get them curious about something, and then leave them alone.

“Push the kids out the door, give them an idea,” Heinecke says. “You can tell them a little background as you're introducing the experiment. Say, ‘Hey guys, we're going to go look for arthropods — those are animals with their skeletons on the outside of their body.’ But then get them started and let the kids take over because summer is really their opportunity to be creative and not have to follow directions.”

“The enthusiasm towards getting outside is great — getting away from the electronics is terrific and turning them on to something that can springboard into a science conversation,” says Brunelle, who lives in Seattle. “First of all I look for the enthusiasm. You know, it depends on the age of the kids but mud is always great. Anything smearing, anything hunting for insects and stuff like that.

One experiment Brunelle suggests involves something as simple as an empty plastic yogurt cup and a little digging.

“Kids can, like real scientists, sample the arthropod populations in their backyard,” Brunelle says. “They can take a container and something to dig with out in the backyard and build sort of a booby trap for bugs that you can hide under a bush in the garden. You dig a hole bigger than the container, you set the container in it, get the lid of it flush with the dirt, kind of camouflage it, put some rocks around it and you can put a lid over it so if it rains your bugs don't drown."

"It's a great way for kids to sample the insect population: insects, arachnids like spiders, and even crustaceans like isopods — you know like pill bugs that fall into their trap. They can look at it the next day, they can dump out what they caught, look at it under a magnifying glass. If they want to, they can try to identify it, they could draw it, they could take a picture of it. I would say just get them started and see what they do with it.”

A few other experiments Brunelle and Heinecke suggest include the following: