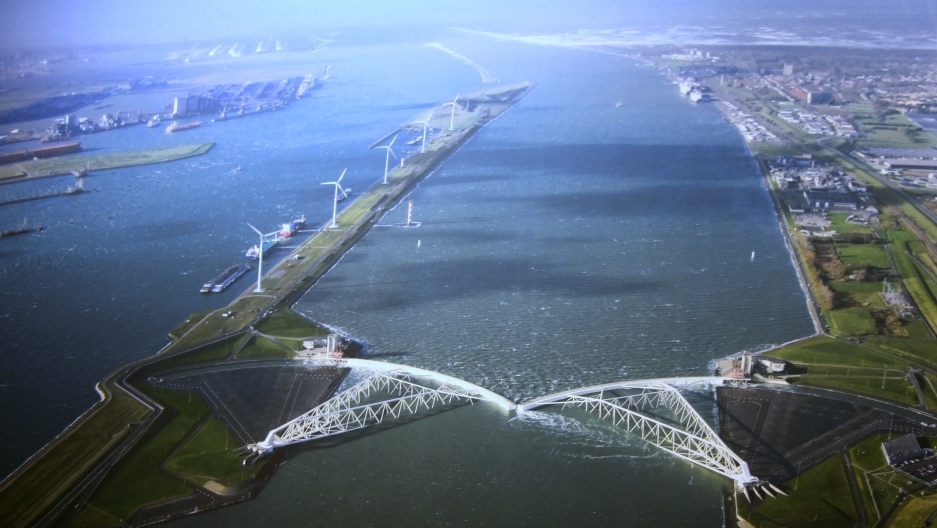 The biggest mobile barrier in the world, the Maeslant storm surge barrier was built to protect the Dutch city of Rotterdam from a one-in-10,000-year storm. It's part of the massive investment the Dutch are making to protect themselves in a new era of rising sea levels.

When a big storm hits a coastal city like New York or New Orleans, it's often the storm surge that does the most damage — the rising water that comes with low atmospheric pressure. But when the next big one hits Rotterdam, the Maeslant storm surge barrier will be ready for it.

The Maeslant structure is the biggest mobile barrier in the world — picture a pair of steel lattices twice the size of the Eiffel Tower, lying down on either side of the channel connecting the Netherlands’ second-biggest city to the North Sea. The Dutch built the massive gate in the 1990s to protect Rotterdam from a storm surge of up to three meters.

That was back when much of the world still saw climate change and sea-level rise as distant threats. But not the Dutch.

“We were already busy with the climate change before it was worldwide,” says Peter Persoon, an engineer turned tour guide at the barrier. “What we are busy with is the future. What are the circumstances in 2100? That’s why we are preparing our country.”

It’s also why cities around the world are turning to the Dutch for their expertise in living with water, honed over generations.

Persoon says the Maeslant barrier should protect Rotterdam from everything up to a one-in-10,000-year storm. Compare that to the levees protecting New Orleans before Hurricane Katrina, which were built for a one-in-100-year event. It cost more than $500 million — a big sum but just a small slice of what the country is investing to fight the effects of climate change.

And Persoon says it’s money well-spent. The Maeslant barrier has already had to be closed once, in 2007. And sea-level rise projections suggest it could be closing a lot more often in the coming decades.

“What we tell the people here in the Netherlands is, if the country is flooded the damage will be at least 700 billion euros,” Persoon says. “If you instead spend every year one billion euros, you spread the bill over 700 years. That’s, I think, the Dutch way.”

That “Dutch way” goes back hundreds of years. Most of the country’s people live less than a meter above sea level, or even below it. The modern Dutch government actually grew out of medieval “water boards” that managed the windmills and canals that have long helped keep the low-lying country dry.

But in the 21st century it’s a challenge on a whole different scale. And you can see the Dutch taking it on just about wherever you look.

About 30 miles west of downtown Rotterdam, where the Rhine River empties into The North Sea, more than 10,000 acres of filled-in land make up the biggest port in Europe. This area, called the Maasvlakte, was built in the 1960s and ‘70s. Today it's undergoing a $3 billion expansion, and the Dutch are making sure to protect their investment with a massive new seawall.

The wall is built of huge concrete cubes piled up along a slope reaching 14 meters high. That’s the maximum projected height of the water in the year 2060, assuming a foot of sea-level rise and a powerful storm rolling in from the North Sea during high tide.

Along with a bevy of dunes that van Oosten calls the “soft seawall,” the new storm protections cost 725 million Euros.

“And we are quite sure that this slope, with these concrete cubes, are high and strong enough to protect us against the [most] extreme event,” he says.

Quite sure, but not completely.

The Dutch are even reevaluating the basic premise that they can build their way out of the climate change. Along with all the dikes, levees and storm surge barriers, they're embracing a new philosophy of working with nature. Just down the coast near The Hague, they're experimenting with another kind of “soft seawall” — a so-called Zandmotor, or “sand engine,” that lets the North Sea shore sculpt its own defenses against erosion.

They’re are also experimenting with a whole new approach to urban development: floating buildings, like a “floating pavilion” on the Rijnhaven, the old harbor in downtown Rotterdam.

It’s made of two geodesic domes and can host 400 people for exhibitions and events.

“It’s a working building,” says, Hans Baggerman, who runs the pavilion’s main tenant, showing off a theater and event space. “It’s even less for show than you’d expect. It’s not an expo.”

The pavilion floats on a platform of styrofoam, concrete and high-tech cushions. The domes are inflated bubbles of ultra-light plastic that resonate like a giant balloon when it rains.

Floating buildings are still a boutique solution, of course, even in Rotterdam. But Baggerman says buildings like this could become more common as climate change forces developers to get creative.

“Because a lot of parts of Holland are outside of the dikes,” he says. “There’s no way you can build buildings unless they are floating.” 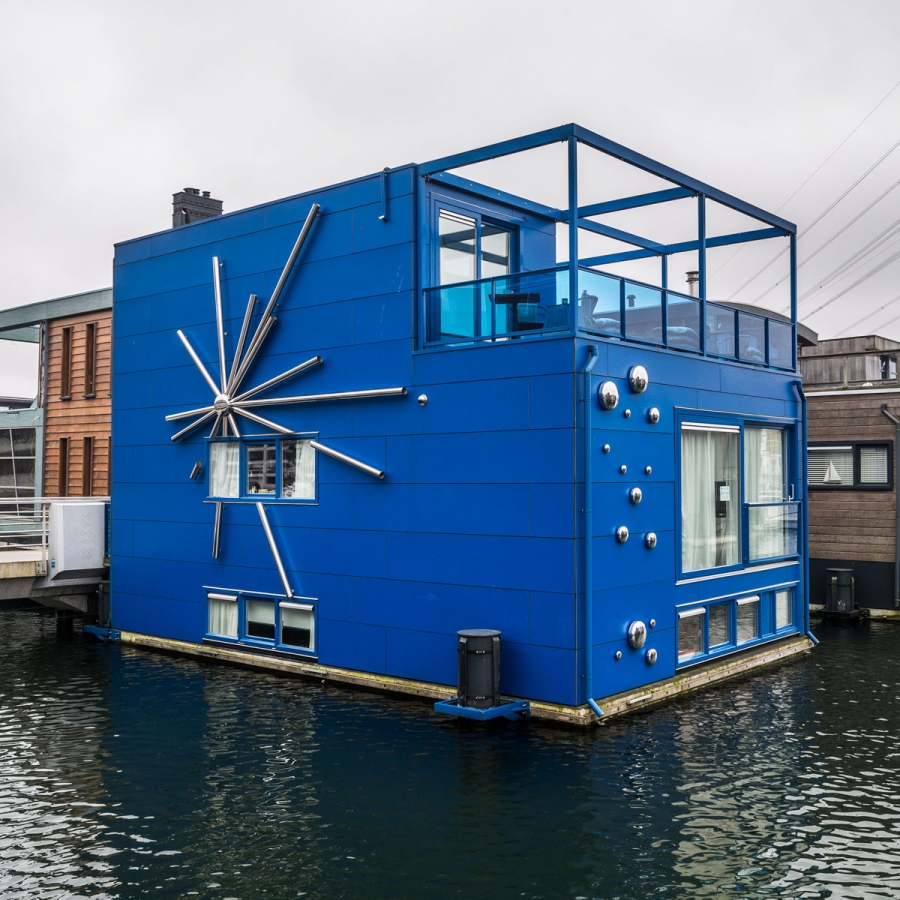 IJburg, a neighborhood of floating houses on the eastern edge of Amsterdam.

All these innovations and more have made the Netherlands a mecca for people from other parts of the world that are confronting a future of rising seas. Delegations from abroad are constantly scouring the country for ideas, and the Dutch are more than eager to share their expertise — in no small part because Dutch engineers and consultants specializing in climate change adaptation and water management stand to benefit from international business partnerships.

But that doesn’t mean they’re complacent.

“We keep on learning and adapting,” says Carola van Gelder, a senior advisor for the national water management authority and a lead on the Zandmotor project. “It’s not that we know it all, definitely not … That’s why we go abroad and look at other ways of dealing with climate change. Because we learn a lot from other countries as well, and we try to adapt that to our system.”

And with the effects of sea-level rise just beginning to pile up, adapting to it might remain a work in progress for centuries, even for the Dutch.