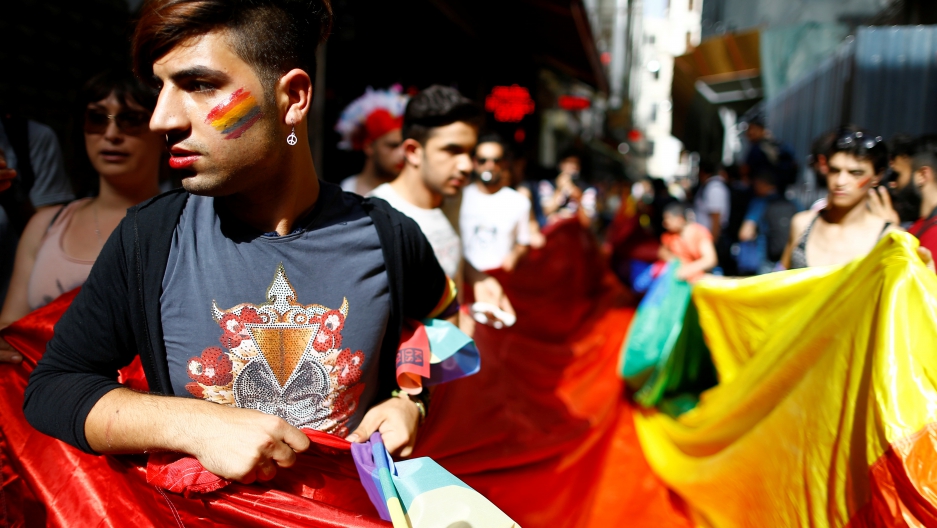 LGBT rights activists hold a rainbow flag during a transgender pride parade which was banned by the governorship, in central Istanbul, Turkey, June 19, 2016

Turkish police fired rubber bullets and tear gas to break up a rally by the LGBT community in Istanbul on Sunday, in the second crackdown in as many days on protests by secular Turks.

Several hundred riot police surrounded the main Taksim Square -- where demonstrations have been banned since major anti-government protests in 2013 — to prevent the "Trans Pride" event taking place during Ramadan.

It was the latest crackdown by police in Turkey against an event during the Muslim holy month.

As the police swooped in on the rally of about 150 people, the crowd fled into nearby streets.

Turkish media reported that at least two people were detained.

The "Trans Pride" rally was to kick off LGBT week in Turkey.

The demonstrators unfurled a rainbow flag, a symbol of the LGBT community, and then tried to read a statement but were prevented from doing so by the police.

Istanbul authorities said on Friday they had banned the annual gay pride parade set for June 26 to "safeguard security and public order" after a string of bombings around Turkey over the past year, some of them blamed on the Islamic State group, others claimed by Kurdish militants.

"We want to march for humanity but the police ban everything," an activist who gave her name as Ebru told AFP.

"We are Ottomans," shouted one, according to video of the incident. "We don't want any of those people here." 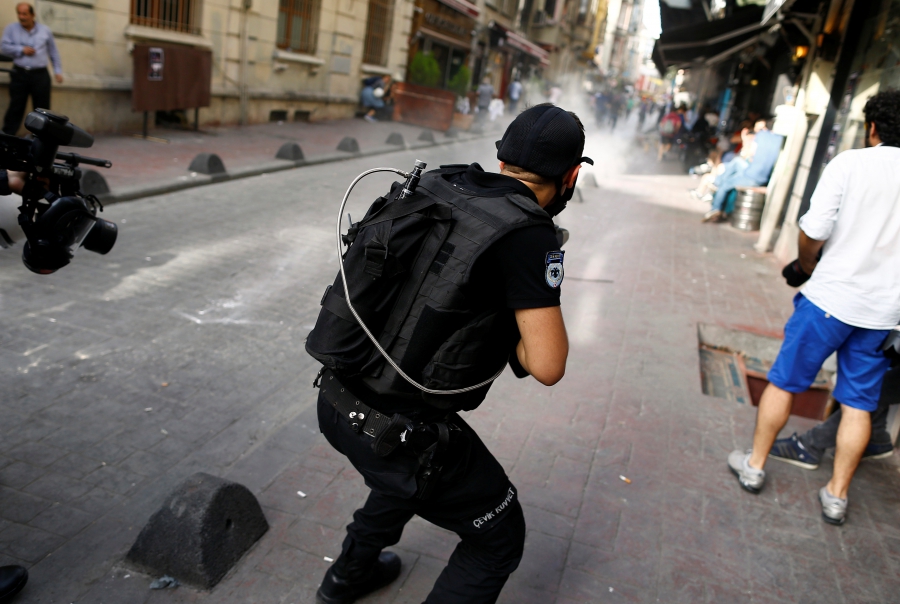 Riot police use rubber pellets to disperse LGBT rights activists during a transgender pride parade, which was banned by the governorship, in central Istanbul, Turkey, June 19, 2016.

A group of ultra-nationalists asked the authorities last week to cancel the gay pride parade, saying it would make sure it did not take place if police did not heed the call.

The annual Istanbul parade has taken place for the last 12 years without incident with thousands of people taking part in the most important LGBT gathering in a Muslim country in the region.

Sunday's crackdown on the Trans Pride event came a day after police fired tear gas, rubber bullets and water cannon to disperse a protest over an Islamist attack on fans of British rock group Radiohead.

On Friday night, a group of about 20 men beat up customers and staff at the Velvet IndieGround music store in Istanbul for drinking alcohol during an event to promote Radiohead's latest album.

Three of the attackers, who were angered by the fact that alcohol was being served during Ramadan, were arrested but released Sunday after questioning.

On Saturday, about 500 protesters took to the streets of the trendy Cihangir district to condemn the store attack, chanting "Shoulder to shoulder against fascism!" and denouncing President Recep Tayyip Erdogan as a "thief" and a "killer".

Turkish authorities have regularly cracked down on anti-government demonstrations since mass protests swept the country in 2013, using tear gas and water cannon against even small gatherings.

Critics accuse Erdogan of growing authoritarianism and of pushing an increasingly conservative agenda in a country where devout Muslims and secularists have long peacefully co-existed.

On Saturday, Turkey's strongman leader vowed to press ahead with the contested redevelopment of Istanbul's Gezi park, next to Taksim Square, which triggered the 2013 revolt by mainly liberal Turks.

A court initially suspended the construction project in the aftermath of the unrest, in which eight people were killed, but the court later reversed its decision.