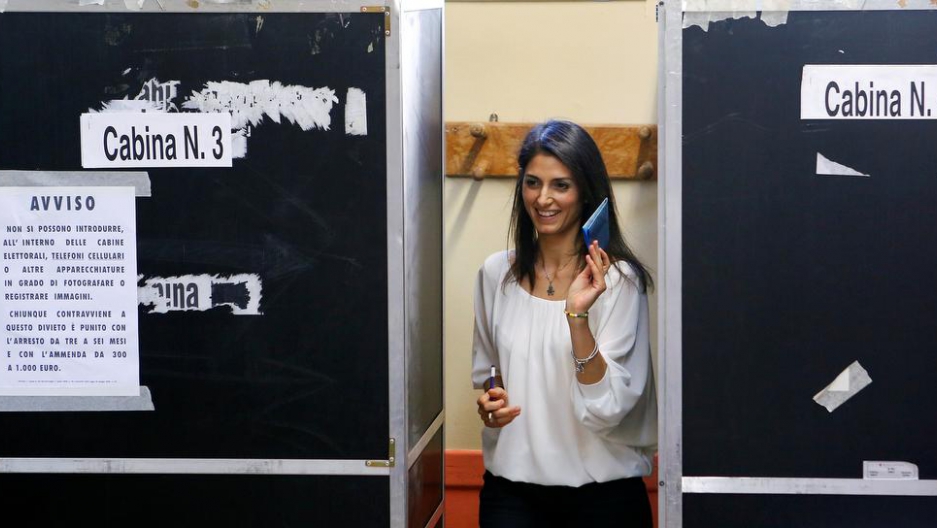 Virginia Raggi, 5-Star Movement candidate for Rome's mayor, casts her vote at a polling station in Rome, Italy, on June 19, 2016.

Virginia Raggi has been elected the Italian capital's first female mayor, sweeping into city hall on the ticket of the populist Five Star movement with the backing of over two thirds of voters.

A Roman born and bred, the 37-year-old lawyer started the campaign as a political novice.

But her public performances in Rome grew increasingly assured as it became clear she was on course for a victory heralded as marking the start of a new era in Italian politics.

From a well-heeled background, Raggi likes to spend her spare time hiking, swimming and skiing, according to her website.

She was derided by some commentators as woefully unqualified for the job of resolving the city's huge problems.

But she won over voters with her program for cleaning up the administration, presenting her ideas in the crisp and sober manner of a patient academic, a style that contrasts markedly with the shrill invective favored by M5S's founder Beppe Grillo.

The Dire Straits fan also won plaudits for her chic sense of style and her popular touch on the campaign trail.

She hailed her victory as a breakthrough for all Italian women.

"For the first time Rome has a female mayor in an age where equality of opportunity remains a mirage," she said in her victory speech.

"I will be a mayor for all Romans. I will restore legality and transparency to the city's institutions after 20 years of poor governance. With us a new era is opening."

Raggi only entered politics five years ago, drawn in by her now-estranged husband's support for Grillo's declaration of war on the establishment and traditional political parties.

The movement's anti-corruption theme struck a chord in Rome, where the previous, centre-left mayor was forced to resign last year over an expenses scandal only months after it emerged the city had been hemorrhaging cash to organized crime.

In a narrative she exploited relentlessly on the stump, Raggi told AFP it was the birth of her son Matteo that convinced her she had to do something about the state of a city blighted by potholes, uncollected rubbish and failing public transport.

During the campaign, she was also upfront about her separation from husband Andrea Severini, who on Monday published an emotional blog congratulating her.

"I have known you for 21 years, now is a difficult time for us and there is no point in hiding that, but I will always be at your side," he wrote, concluding: "I miss you so much I could die."

Elected to the city council in 2013, Raggi, a specialist in intellectual property, was quickly noticed for her eloquence and stubbornness.

Growing up in the Saint John Lateran area of Rome, close to the Colosseum and historic centre, she was a studious child — and a stubborn one, by her own account.

"I was a curious young girl, interested in many things, but very focused, as I am today. Determination never failed me," she said.

M5S held its primary for mayoral candidates online, and Raggi was quickly picked as a frontrunner thanks to the quality of her video presentation.

It wasn't long before her dark eyes and chiseled features were staring out from posters in underground stations and on the side of the late-arriving buses that helped to put her in power.

As mayor of Rome, Raggi will have a national profile as the poster girl of a movement looking to shore up its identity after Grillo's decision to step back from frontline politics.

Rome's hard-to-please citizens appear to have embraced the University of Rome graduate, admiring how she never flinched under attack from her opponents.

After feisty exchanges in one televised debate, she softened her tone and appealed to voters with a simple message: "If you want nothing to change, vote for them".

One of her biggest challenges will be convincing the city she can act independently, despite signing a contract with M5S in which she pledged to toe the party line and consult it on all major administrative decisions.

"Four or six eyes are better than two" she said in defense of that arrangement, while insisting she will be very much her own woman.