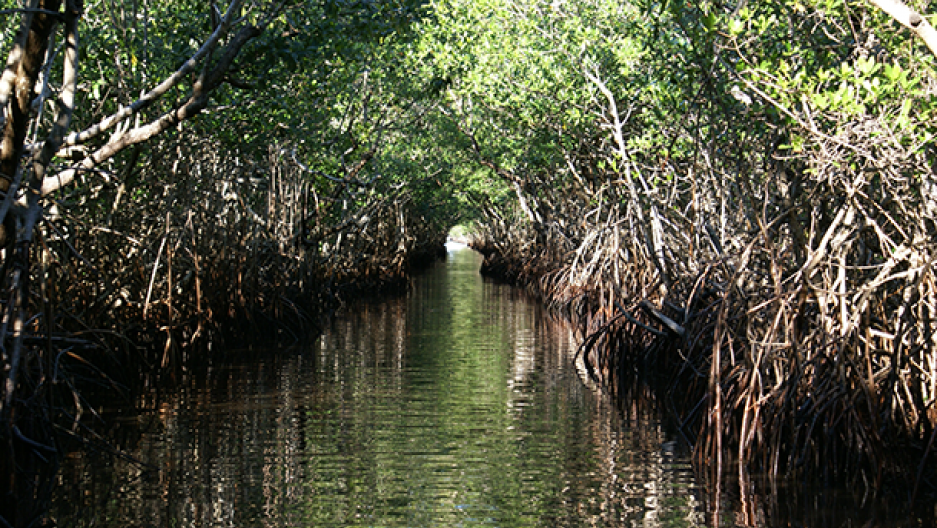 Sea-level rise is a major threat to coastal parks including Everglades National Park.

Climate change is not just incinerating boreal forests — it’s also presenting new challenges for one of America’s most beloved icons — its national parks.

The director of the National Park Service, John Jarvis, recently called climate disruption the single greatest threat to the integrity of the parks that has ever been experienced. And this is causing a wholesale rethink of planning for the future of the parks.

“We're seeing all kinds of climate change impacts throughout the system,” Jarvis says. “Some of the most obvious, for example, are sea level rise impacts on coastal parks where we're seeing erosion of cultural resources, of beaches and these sorts of things.

"In our parks in the northern areas, for example, in Alaska, we're also seeing melting of permafrost. Park staff are having a very difficult time getting into some parks… In addition to that, parks are seeing the kind of impacts that the forests are — we’re seeing increasing fires that are more severe and larger.

"In many of our Western parks you'll see a lot of trees that are affected by pine beetle and are brown … We have extensive tree death up in Yellowstone with white bark pine and other species. The seasonality of things are changing. So park visitors are actually responding to climate change also and they're showing up earlier in parks, and in some cases staying later. So the impacts are really extremely widespread all over the parks.”

Climate change is also affecting plants and animals in the parks. Jarvis says rising temperatures mean animals are being forced to move to new territories. It’s the job of national parks, he says, to think of ways to help these moves.

“We need to increase the conductivity between parks and the surrounding landscapes so animals are able to move,” Jarvis says. “We've got the Yellowstone to Yukon initiative, there're some major migratory corridors for pronghorn and mule deer that inhabit the area around Great Teton and Yellowstone National Park … these corridors and conductivity between natural habits are extremely important all throughout the United States and the rest of the world.”

But animals aren’t the only park inhabitants attempting to move to new territories. Jarvis says plants are also affected.

“We're already seeing some changes,” Jarvis says. “There was a study that was just published from California that showed that in the Sierras there's a number of tree species that are moving up the mountains, moving up in elevation as it gets warmer. The climate models are projecting that the areas where trees live now are going to change dramatically … So we're looking right now to try to project what kind of species might occur and be thinking about do we need to provide corridors via prescribed burns or other methods that might facilitate these movements of species.”

The national parks have not only begun planning ahead to protect the plant and animal species they harbor, they’ve also begun to change their building plans to avoid constructing stations and facilities in places that might be underwater in 4-5 decades.

Jarvis says national parks have an important role to play as the climate changes.

“We have on the order of 400 million visitors per year, and so I think the parks have really a very important educational role for people to tell them about climate change, to interpret the changes that we're seeing now.

"They also have an extremely important role for preserving biodiversity. We have some of the finest landscapes in the world in our national parks. And so I think the parks will continue to play all of the roles that they play now in terms of sites that people want to visit for aesthetic or recreational reasons, for preserving biodiversity and for educating people from around the world on what's happening with their natural environments.”