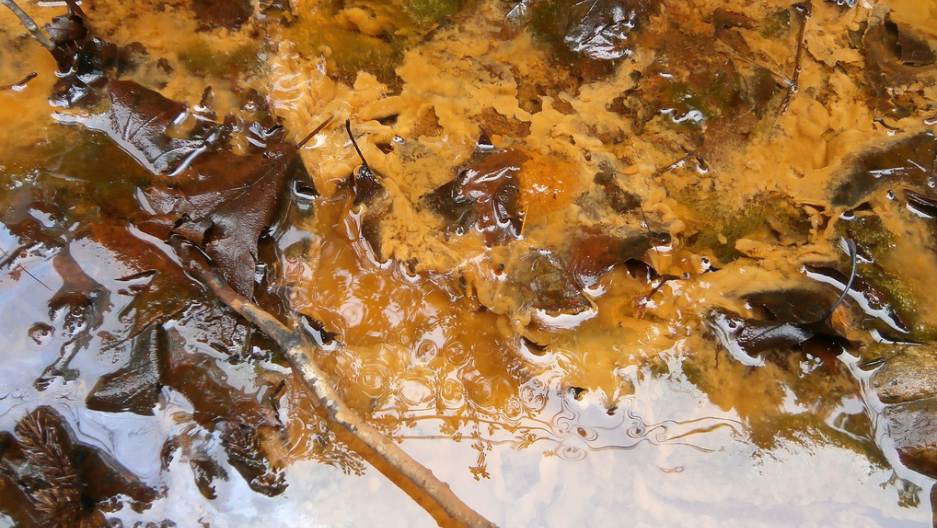 In the quest to mend the ecological damage and imbalances humans are causing, many enterprising scientists are turning to the endlessly inventive natural world — for example bacteria that can metabolize oil spilled into the sea, or plants that take up toxic compounds. And such amazing life forms are everywhere.

Microbiologist David Emerson has located one such fascinating life form in a ditch near Boothbay, Maine. The ditch is filled with bright orange rusty water, and is teeming with an organism called Leptothrix ochracea, a sort of iron-oxidizing bacteria.

Emerson is one of the few people who likes this unpopular type of bacteria, which survives by feeding on the iron dissolved in particular water flows. Most people consider it a nuisance.

“These organisms are pretty heavily involved in fouling and corrosion of water pipelines,” Emerson says. “Entire systems have gotten clogged with iron bacteria.”

If Leptothrix ochracea gets into a water system, it can turn your tap water bright orange. They’re not all bad though. Once the bacteria feed on the iron, it turns to rust, and that rust can grab onto stuff floating by — like arsenic, other harmful metals, even viruses. In other words, these bacteria can actually help filter water. And that rust is remarkably delicate.

“What makes them special for me is that when you look at them under the microscope, they make these amazing structures of either tubes or twisted stalks,” says microbiologist Emily Fleming.

Microbiologists like Fleming and Emerson have only recently figured out how to grow some of these bacteria species in a lab. Emerson has been collecting bacteria from the ditch in the springtime and, feeding it steel dust and making sure it gets just enough oxygen. He’s trying to figure out how the bacteria feeds on iron, and what these bacteria have in common with each other.

Soon, Emerson hopes, we will be able to figure out how to harness these bacteria to improve our world — by filtering water, building mini-structures out of rust, and catalyzing reactions.