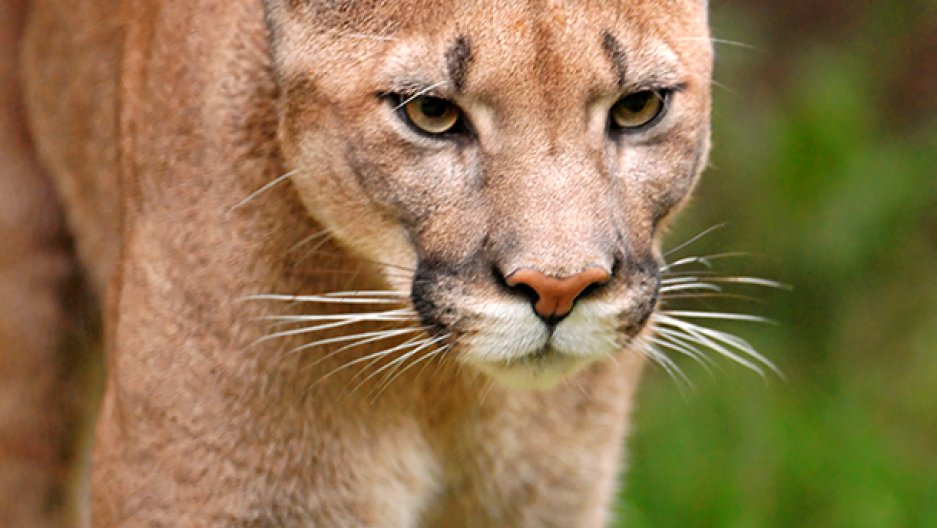 The Black Hills of South Dakota have a glut of mountain lions — so some of the young males must leave the place of their birth.

Mountain Lions have been considered extinct in the Eastern United States for decades, but there is one lion who trekked from his home in the Dakotas to just a few miles outside of New York City.

The lion — Connecticut Cat, as he’s come to be known — a young male, was born in the the Black Hills of South Dakota. His birthplace, researchers think, was in a sort of mountain island, separated from the rest of the Rocky Mountains that has a high population of mountain lions. When Connecticut Cat came of age, he, like other juveniles his age, set out to look for a mate and establish his own territory. Most of his peers would have headed west into prime cougar territory, but this lion for some reason headed east.

“He left probably when he was a teenager, about a year and a half old, and set out on this incredible cross-country journey,” says author William Stolzenburg, whose new book, “Heart of a Lion,” carefully documents Connecticut Cat’s extraordinary 2,000-mile journey.

The lion was soon spotted in the suburbs of Minneapolis and St. Paul. He was seen crossing the street by a police officer, and by other residents who started writing him up in newspapers calling him “The Twin Cities Cougar” or “The St. Croix Cougar.”

“The norm for animals doing what this animal attempted to do is to get shot,” Stolzenburg says, “If they don't get shot, they usually get run over or they just seem to disappear. But none of them have been known to survive. The closest we have to something like that was a cat that in 2008 tried the same thing from the Black Hills, wound up in of all places downtown Chicago. ... There's probably more than somewhere over 100, 120 cats that have died trying to make that trip across.”

The Connecticut Cat went through Minnesota to Wisconsin and headed north. Most people think he likely traveled to the Upper Peninsula of Michigan and crossed the international boundary into Canada. Later he showed up in the Adirondacks in Lake George, New York, where a woman washing her dishes spotted him running through her backyard.

“This animal kept going for some reason, and we think it's because he simply didn't find any females along the way, and if there had been female lions there, very likely he would have stayed,” Stolzenburg says. “The next time we see him, he shows up 23 air miles from Manhattan's Central Park. He's in Southern Connecticut, in Greenwich of all places. He starts revealing himself like he has along the whole way. In the middle of the day, he's seen walking across somebody's patio in Greenwich, Connecticut.”

A week after being sighted on someone’s patio, Connecticut Cat’s story reached a sad ending. Just past midnight, outside the coastal town of Milford he was struck by an SUV and killed.

“Actually, there weren't many cars on the road,” Stolzenburg says, “And when you consider all the different highways he crossed in his many many miles getting across United States, he’d overcome all the hurdles. All of a sudden he just made a mistake and stepped in front of the car on this night in June.”

Stolzenburg was among the people who received a call in 2011 with the news that a mountain lion had been killed in Connecticut.

“We got this news that a cat had been killed on a roadside in Connecticut of all places and so we all sat up in our chairs and most of us just dismissed it as just perhaps this must be an animal, a pet that's been released, something that got out of the zoo or something. This couldn't be a real honest-to-God wild cougar,” Stolzenburg says. “But lo and behold, six weeks later the DNA tests came back and determined this cat had come all the way from the black hills of South Dakota.”

Stolzenburg says the Connecticut Cat’s mission to find a mate and establish his own territory in the eastern United States was probably doomed from the beginning. It’s unlikely mountain lions will be able to re-establish themselves in the east.

“There's no females in the East, and they don't go as far as the males, and so this idea that they're on their way, it's just a stepping stone journey and they're going to be here in 20 years or so. Well, the problem with that is that the females don't make these huge jaunts as males do, even if they could survive it, they usually don't.

"To imagine a female doing what our Connecticut cat did in one big leap, you might as well put the money down on the Powerball,” Stolzenburg says. “But what that leaves us is this other option, which is going to be a real controversial one, but which the some of the best minds in eastern cougars are thinking has to happen. We're going to have to start a colony. We're going to have to think of bringing the starter colony here and helping them along.”