A mangled bicycle helps weigh down a shelter's roof.

From June to September, Mother Nature will add insult to injury and hammer central Nepal with its second monsoon season since a catastrophic earthquake.

The April 2015 quake left 8,000 dead and hundreds of thousands homeless. Many living with the fresh scars of tragedy, especially in rural villages, remain wildly ill-prepared to face the region’s elements.

One of these villages is Hokse, a mountainside town of 3,000 people 30 miles east of Kathmandu. While Hokse lost 11 of its own in last year’s disaster, the scars that most connect them predate the earthquake and are physical, not metaphorical.

According to a 2014 Asia Foundation study, 42 percent of organ-sellers in the district parted with a kidney so they could acquire land or a house. After last year’s earthquake, however, no homes in Hokse remained inhabitable. Villagers here are still living in makeshift homes that are vulnerable to the elements.

A woman stands among the makeshift homes of Hokse.

Local authorities say the current price tag on a new home in Hokse is around $4,000, far beyond the reach of the average person who has parted with an organ. Most villagers who've sold a kidney here otherwise earned around $50 a month as farmers or laborers — before last year's earthquake and Indian blockade ground Hokse's economy to a near halt.

While historical data on organ trafficking in the region remains limited, the Asia Foundation study the year before the earthquake concluded Nepal’s kidney trade was “booming,” bolstered by a worldwide organ shortage. The WHO estimates 10,000 illegal organ transplants occur worldwide each year.

Sixty-three-year-old Kenam Tamang, who claims to be the first person in Hokse to sell a kidney, did so 43 years ago.

The traffickers operate through Nepalese middlemen, who first approach the poorest villagers — reported to be as young as 15 — to manipulate them into traveling to India to sell their kidneys. Some sellers who return home feeling fine — though they’re rarely aware of health complications — encourage their neighbors to do the same.

An anonymous kidney seller shows the scar left over from his operation.

In India, the organs are removed by black market doctors and sold for up to 50 times what the seller receives, which is anywhere from a few thousand dollars to nothing at all.

“When [the brokers] came, I was building a house. [The middleman] said, 'Why do you work so hard? Come with me, and I'll give you a job, so you can help your family,'” recalls 65-year-old Indra Bahadur Tamang, who sold a kidney decades ago. (Tamang is an indigenous family name that many in this village share.) “One morning at 3 a.m. I was taken to Siliguri in India. The men I was with would talk in Hindi, so I couldn't understand. I was promised 50,000 rupees [$500] for my kidney, but I wasn't given anything.”

If people don't have any options left for employment, “they have to sell what they have in their body,” says Raju Thapa, president of Human Rights Without Frontiers Nepal. “Finally [they] go to this broker and this chain is expanding and expanding, and we have to break this chain.” Thapa’s group has plans to introduce a poultry farming cooperative to Hokse, hoping it will provide a stable source of income and food.

But those who’ve lost homes face a long road to rebuilding — especially if they already traded an organ to fund the first investment.

“I built a house with [the money I sold my kidney for]. The house I built collapsed in the earthquake last year,” says Chhenam Tamang, who traveled to Chennai, India, to sell his kidney for $600 30 years ago. Now he’s living in a makeshift structure with no foundation. “I'm worried that a storm will come and blow my shelter away.” 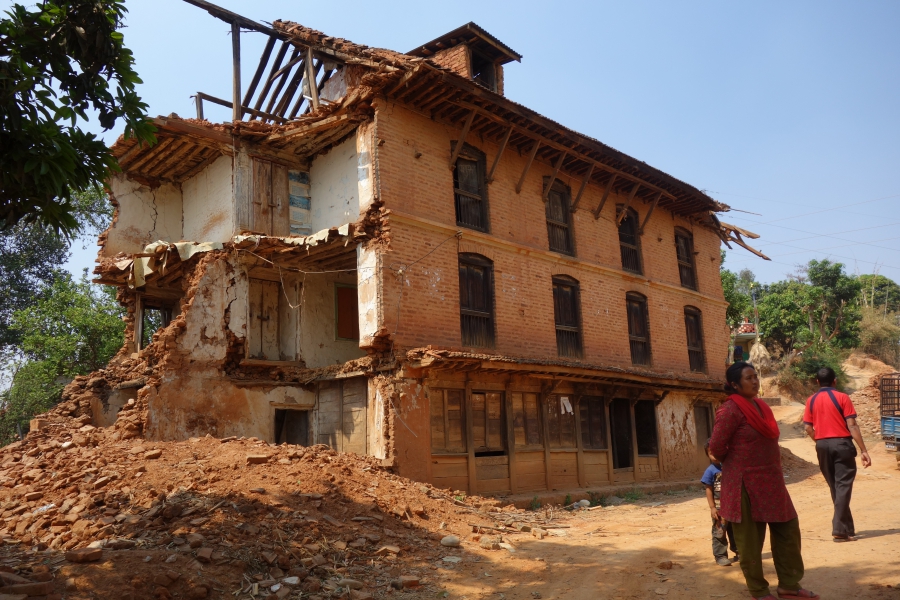 A home damaged by the April 2015 earthquake.

During Nepal’s three-month monsoon season, which begins this month, the nation can receive up to 80 percent of its annual rainfall. Whipping winds and downpours batter the country almost daily, and Hokse’s mountainside topography leaves it prone to landslides. Less than two years ago, mudslides in Sindhupalchok district, just 30 miles north of Hokse, killed over 150.

“I’m currently living in a tent. What can I do?” asks a 40-year-old woman whose child was pulled from rubble and saved during the earthquake last year. “The rain continues all day — storm rises — monsoon is near. Where do I go?”

The villagers’ makeshift shelters, usually standing beside the remains of their pre-earthquake homes, are low patchwork structures comprised of wood, tarps, old food bags and thin metal sheets. The floors are earthen and the roofs are usually kept in place by a hodgepodge of heavy objects — rocks, blocks, logs, and in one case, a mangled bicycle.

A makeshift shelter in Hokse.

“[Our temporary shelters] will never be the same as a house. When the storm comes, I’m feeling afraid for the kids. When it rains, there’s leaking, and the children get wet,” says Kanchhi Tamang of Hokse. “The children cry. Of course that’s [the most difficult thing to face].”

Even at some schools in the earthquake-affected zone outside Hokse, children wear donated raincoats as they sit in class to fend off the rain that pours in through temporary bamboo schoolhouses.

“Every moment — every day — [the villagers] are living with fear,” says Rameshwar Thakur, principal of Hokse’s secondary school.

While the coming monsoon will be a major test for post-earthquake Hokse, it won’t be the first. The village has already braved a Nepal winter, withstanding temperatures hovering around freezing.

“If you go inside [some of the homes in Hokse], there is nothing — no quilt, no pillow, no blanket. They have a very pathetic situation,” says Thapa, whose organization distributed fur pants and winter coats to villagers last October. “People in the earthquake affected zone — what they say is, ‘We lie in the bed of the rain and our pillow is ice.’” 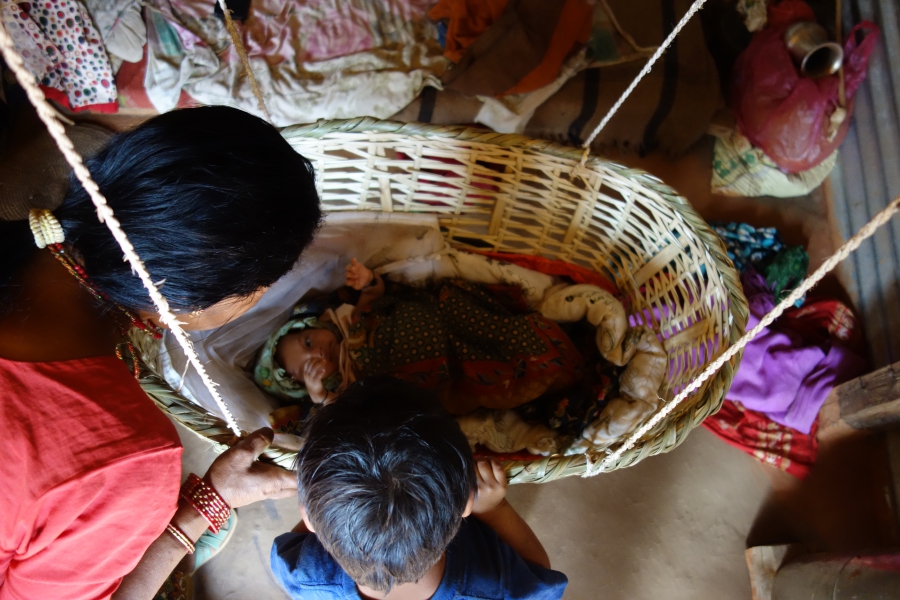 A baby rocks in a hanging crib suspended from the ceiling of a shelter in Hokse.

While more than $4 billion in international aid has been pledged post-earthquake, Nepal’s government, increasingly accused of corruption and ineptitude, has distributed little of it.

When I ask Kanchhi Tamang how she's preparing for the rainy season, she shrugs.

“What preparations?” she asks. “Who would come here? It would have been good if there was someone to help.”