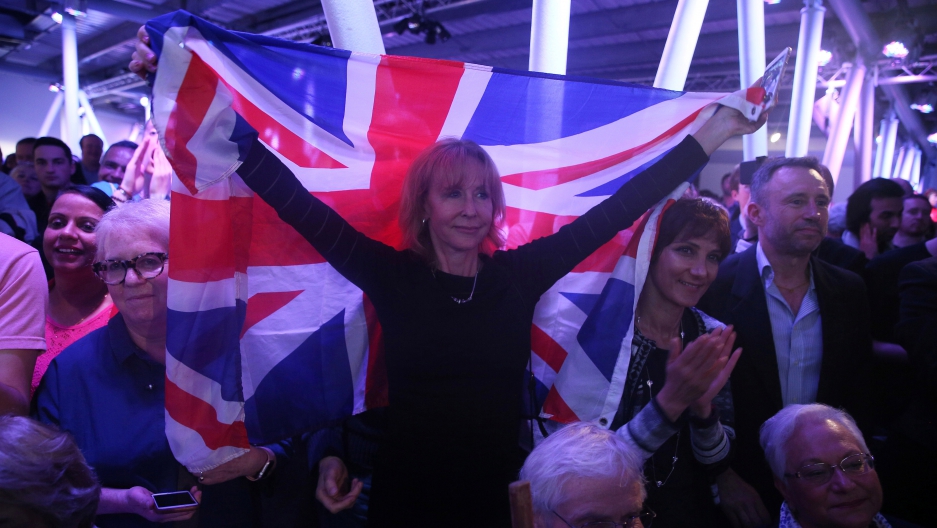 A Brexit supporter holds a Union Flag at a "Vote Leave" rally in London.

Most people in Britain are familiar with an apocryphal newspaper headline: “Heavy Fog in the Channel: Continent cut off!” Its meaning to Brits is clear: that the continent of Europe does not include Britain, and that somehow Britain is better than the rest of Europe.

On June 23, the people of the UK get to vote on whether to remain in the European Union or leave. Some argue that there is a degree of xenophobia, sometimes subliminal, mixed in with practical arguments from those supporting the campaign to end the European experiment.

The notion of leaving is known as the "Brexit," or a British exit from the EU.

The EU was originally, in essence, a compact between France and Germany to never fight another war. Their rivalry had led to countless wars and the near-apocalypse of World War II. After 1945, statesmen from both nations said never again, and launched an experiment to integrate so closely that war would be impossible.

Britain entered the EU on unfavorable terms in 1973, after holding out for decades. The country was broke and had to pretty much beg for admission. The terms included severing ancient trade and migration ties with former colonies like Australia, New Zealand and Canada. That memory still rankles for some.

Read more: British referendum campaigners are facing off in the river. And their music rocks.

Since then, London has usually played the role of cautious skeptic whenever other parts of Europe proposed closer integration.

Opinion polls ahead of the referendum indicate a close vote, but the "Leave" vote is ahead, and growing.

Gee is a journalist, a frequent contributor to the New Yorker and lives in San Francisco. But he’s not letting that stop him from voting. He could have voted by mail, but due to what he calls "an administrative mix-up," he was too late. So he has found another way to vote — by proxy.

“I’ve asked my younger brother, Oli, to be my proxy,” says Gee. “The way it works is that my ballot will be mailed to him in London … so he will actually have two votes to cast.”

Gee admits he is not affected by the EU's status on a day-to-day level. He lives in California after all. “But,” he explains, “I relate to the EU more on the level of ideas and ideals.”

“I’m very much opposed to the idea of an inward-looking, closed and somehow diminished [country],” Gee says. “I’m very much in favor of a country that is outward-looking and expansive and open. Plus I’m cognizant of European history, and of the origins of the EU, and the knitting together of [the continent] after World War II, and I’m wary of efforts to untie that compact.”

Gee’s family is divided. He recalls how on his last visit to London, for the Jewish Passover holiday, his brother argued with his mother, who is in favor of leaving the EU.

Gee went to great lengths to have his say on the referendum. But if you’re actually living in the UK, things are a lot easier. In some cases, you’re even able to vote if you’re not a British citizen. One way this can happen is if you’re from one of the 53 other nations in the Commonwealth and living in the UK. About one million people fall into this category and one of them is Gary Miele. He moved from Canada to the UK in 1985 and has since set up several companies there. He says that he considers himself Canadian, but is very loyal to the queen.

He holds the opposite view to Gee and is convinced that Britain should leave. “I don’t want to be told how to run my own business,” Miele says. “I don’t like being dictated how I can trade from somebody sitting in an office in Brussels, who has never met me in my life.”

“I’m also being undercut quite often from people coming in from Eastern European countries,” he says. “If we left, we would be able to regain control of our own borders.”

For Miele, the decision couldn’t be much more important. If the UK votes to leave the EU, he says he would consider applying for British citizenship. If it votes to remain, he would consider leaving the UK and going back to Canada.

“I think I would stay here, even though I have family in both Montreal and Vancouver,” Miele says. “Selling my property, closing my businesses, and moving back to Canada wouldn’t be an instant option ... but I wouldn’t rule it out in the future.”