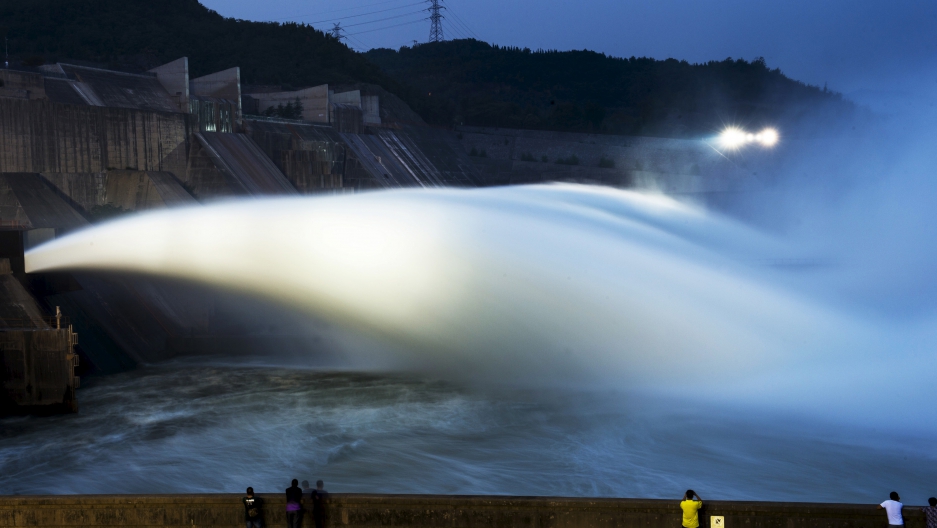 Visitors watch as water gushes from a section of the Xiaolangdi Reservoir on the Yellow River, in Luoyang, Henan province, China, July 4, 2015.

Last year, New York City faced an unusual situation. An epic winter in the city’s Delaware River watershed brought heavy snow and very little rain. Stubborn cold meant there was no snowmelt to refill water-supply reservoirs, even as the city’s 9.5 million residents were draining them dry. A midwinter drought loomed.

Yet New York didn't have to put anyone through water rationing. In fact, relying on a new technique that uses modern weather prediction to fine-tune water supplies, the city continued drawing water from key reservoirs at normal rates while waiting for warmer weather.

Within weeks, all the city’s reservoirs began refilling with snowmelt.

“When we look back at how far we drew the reservoir down, it was historic,” says Jim Porter, the city’s chief of water system operations. “The only reason we did that was because of the confidence in these forecasts.”

Many other water managers are now looking closely at forecast-informed reservoir operations as a tool to stretch their water supplies. Amid pressures from climate change, population growth and environmental stress, advances in weather forecasting could be a cheap and effective way to keep vital reservoirs full while also boosting flood protection.

Dams and the water reservoirs they hold back are essentially like bathroom sinks. If the faucet discharges more water than the drain can handle, the sink will eventually overflow and ruin the floor.

But dams and reservoirs have an additional handicap: We can never be certain how much water nature will pour into the watershed upstream. And if too much pours in, it’s not just a floor that’s at risk, but the integrity of the dam holding back the water — and the safety of people living downstream if the dam bursts or levees are overwhelmed by high flows.

So engineers wrote dam operating rules — often embodied in water-control manuals — that dictate how much empty space must be maintained in reservoirs to contain floods. These usually depend on the season and local climate: More space in winter and spring, even if no storms are expected; less in summer and fall. In some cases, the rules also prevent operators from drawing reservoirs too low, in order to ensure enough water for urban and agricultural users and environmental requirements like adequate flows for fish. And engineers wrote the rules conservatively to handle uncertainty.

“We can’t afford to kill people because we want to save water,” says Mike Dillabough, chief of operations and readiness at the San Francisco District of the US Army Corps of Engineers.

But most large dams were built during a time when weather forecasting was rather crude, and although forecasting has improved significantly, the water-control manuals have not caught up. At most large dams, water managers are still required to fill and empty reservoirs according to the calendar, without regard to the weather.

This means, for example, that many California reservoirs had to dump precious water during the state’s recent historic drought, even when weather forecasts clearly showed no storms on the horizon to refill them.

“We need to manage our water resources in a much more intentional fashion, because it’s limited. It’s really tight here,” says Rob Hartman, hydrologist in charge at the California/Nevada River Forecast Center, a branch of the National Weather Service. “We don’t have to make decisions in the dark, and we shouldn’t be ignoring information that helps us do a better job.”

Still, Dillabough says, “we’re at the very beginning of [this]. We are still trying to figure out what modern science allows us to do.”

There was no single change in weather forecasting that made this change possible, Hartman says. Rather, it’s been a progression of developments in meteorology. Improved weather radar, satellite imagery and more powerful computer modeling of storms have all contributed.

In the past, Hartman says, the National Weather Service rarely released rainfall forecasts more than one day in advance. Now it can accurately forecast rainfall amounts five days out, and is experimenting with two-week forecasts. These are further computed into stream-flow forecasts for individual watersheds based on knowledge of temperature, soil moisture, snowpack and terrain. This means water managers can now get a runoff prediction for a particular reservoir up to a week in advance.

The US Army Corps of Engineers, the notoriously cautious agency that manages flood risk across the US, is in the midst of a multiyear, $22 million research project with numerous partner agencies to study whether forecast-informed operations can be applied at many of the reservoirs it oversees to improve both water storage and flood protection. Its pilot project — part of $2 million allocated this fiscal year — is Lake Mendocino on the Russian River in California’s wine country, and initial work suggests new procedures could boost water storage as much as 25 percent — a major improvement in drought-plagued California.

The approach is also being incorporated into operating rules at Folsom Reservoir, operated by the US Bureau of Reclamation near Sacramento, as part of a new flood-control spillway recently completed. The bureau was directed by federal legislation to use weather forecasting in its operation of the new spillway to maximize flood safety. The spillway allows the reservoir to be emptied faster in advance of a big storm, and the new rulebook will provide a framework for doing so.

“The work we’re doing encourages all of us that this is definitely worth pursuing,” says Jay Jasperse, chief engineer at the Sonoma County Water Agency, which relies on water delivered from Lake Mendocino. “It’s something that has got to be included at least in our long-term program, because optimizing these operations for more variable conditions is how we’re going to have to operate with climate change.”

Meanwhile, at the Center for Western Weather and Water Extremes at the Scripps Institution of Oceanography, researchers are developing new prediction tools for so-called “atmospheric river” storms, which can deliver as much as 50 percent of an entire year’s rainfall in a few days. It was such a storm that brought record rain and flooding to parts of Louisiana in March.

Predicting exactly when and where such storms will strike is key to improving the flood safety aspects of forecast-informed operations, says Cary Talbot, associate technical director at the Army Corps Coastal Hydraulics Laboratory in Vicksburg, Mississippi.

For example, if a Monday forecast showed a huge storm arriving Friday, Lake Mendocino could release water much earlier than old forecasts would have allowed. As a result, it could release more water in a more gradual manner, limiting flood risk before and during the storm.

“We’re very excited about this. It does represent a significant step forward — a leap ahead, if you will — in our capability,” says Talbot, who is coordinating experts at two Army Corps labs working on the project.

It will take years to make this new approach mainstream. But the result could be a dramatic improvement in the operation of the United States’ dams — without having to pour a single bucket of concrete.

This story was first published by our partners at Ensia.