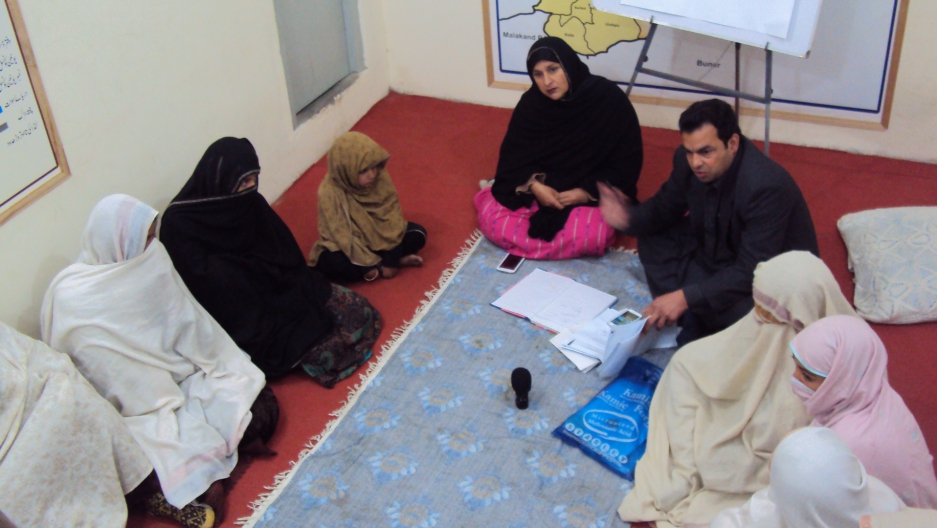 Tabassum Adnan (face pictured) leads a women’s jirga in the Swat Valley in northern Pakistan. Along with a male attorney, she is advising the group as women detail crimes against them such as robbery and physical abuse.
Credit:

It was a brutal killing: A dozen leaders of a remote Pakistani village grabbed a teenage girl from her home, bound her and set her on fire in a van.

Her crime? Helping a couple to elope. Her judge and jury? A village council known as a jirga.

In Pakistan and neighboring Afghanistan, jirgas are common in rural areas like Abbottabad, where Ambreen Riasat was found charred in May. Acting as the local council and court, these bodies’ word is law, and they have been completely composed of men.

In the green hills of the Swat Valley, another remote northern Pakistan district, local resident Tabassum Adnan turned traditional Pakistani gender roles on their head by forming the first female jirga in the region. It’s the same area where the Taliban once held absolute sway and, in 2012, shot teenage activist Malala Yousafzai in the head for being insistent on girls going to school.

Adnan, 39, said she set up Khwendo Jirga, or "sisters’ council," in 2013 after witnessing the failure of the system to protect a local woman.

“A young girl was attacked with acid,” Adnan recalled, referring to a common assault on women, often in apparent revenge for resisting a man’s advances. “When her case was presented to a male jirga, they promised their full support, but they didn’t help at all.”

And cases like Riasat’s are exactly what her 25-member women’s jirga wants to prevent.

“Though killings in the name of honor have become a commonplace in our society, Riasat’s death was especially barbarous,” Adnan added. “The government and the law enforcement agencies have failed.”

In fact, Pakistani courts have been outlawing jirgas and declaring their judgments illegal since 2004 — and the country’s Supreme Court in 2012 declared jirgas illegal and unconstitutional. But the rulings have not been effective in tribal parts of the country, and the government has refused to outlaw them outright.

Instead, in rural areas of Pakistan and Afghanistan — out of reach for official law enforcement — these all-male councils remain the authority for settling local disputes. That often means ordering gang rapes or “honor” killings to appease a party claiming to be seriously wronged, or marrying off female children of debtors, a traditional practice called vani.

Tahira Abdullah, a member of the Human Rights Commission of Pakistan, a nonprofit group, said that the government has to step in to put an end to the unofficial councils and their death sentences.

“Until jirgas are abolished by law, Pakistan will not see an end to honor killings and other barbaric violent crimes against women,” Abdullah said. “No matter how many gender-based violence laws are enacted.”

Adnan does not have as much faith in the government either. From her experience working with officials, she finds them biased against female victims and unable to ensure their safety.

This week, an influential group of 40 Pakistani religious leaders called the Sunni Ittehad Council issued an edict against revenge killings that aim to restore a family’s honor. Such killings constitute an “unlawful, unconstitutional, undemocratic, unethical and unjustifiable act that must be stopped by the state at any cost,” the council’s Punjab general secretary, Mufti Saeed Rizvi, told the Agence France-Presse.

Still, the horrific sentences will continue, analysts say, in order to keep rural villagers in line.

Abdullah Khan, managing director at the Pakistan Institute for Conflict and Security Studies, lives a few hundred yards from where Riasat was killed. He said the murder was the way for the local jirga to frighten the community into sticking to traditions.

“The local clan of Sadyal sat together at midnight and decided to teach an unprecedented lesson to those who played a role in love marriages,” Khan said. “Some of them went to Ambreen’s house and told her mother to send Ambreen with them or they would kill the rest of the family.”

Meanwhile, by creating a female jirga in an ex-Taliban stronghold, Adnan knows that she is challenging tradition and putting herself in jeopardy: Some local men think the idea is merely crazy while others are contemptuous of it, she said.

“I challenged the set norms of the society, which has put my life in danger, but I always thought that was the right thing to do,” Adnan said.

“Those who raise their voices against injustice are labeled ‘agents’ in our society,” she added.

According to Adnan, nearly 1,000 girls and women have sought help from the sisters’ council over the years. One of them was Tahira, a girl from Swat, an acid attack victim who later died from her injuries but the jirga made sure her case was highlighted in the media and properly documented.

Another case involved a 13-year-old girl being forced into marriage. Adnan rushed to the venue to stop it from happening and filled out a police report. The girl is now resuming her education.

Part of the reason Adnan is so passionate about defending women in Pakistan is because she was a child bride herself. Married off at 14 to a man two decades her senior, she divorced him after 20 years of abuse. That shocked her family and local society: Divorce goes against local traditions.

Still, she said, “In the end, I stood up for myself and stopped being miserable.”

Even though she bucked tradition, she said she supports the jirga system in general, just modified to reflect women’s voices.

“I don’t agree with those who say that the jirga system should be dismantled because that’s not practical, people need a structure to solve their issues,” she said. “We need to reform the jirgas and if the government supports initiatives like the women’s jirga then more women will be encouraged [to participate].”