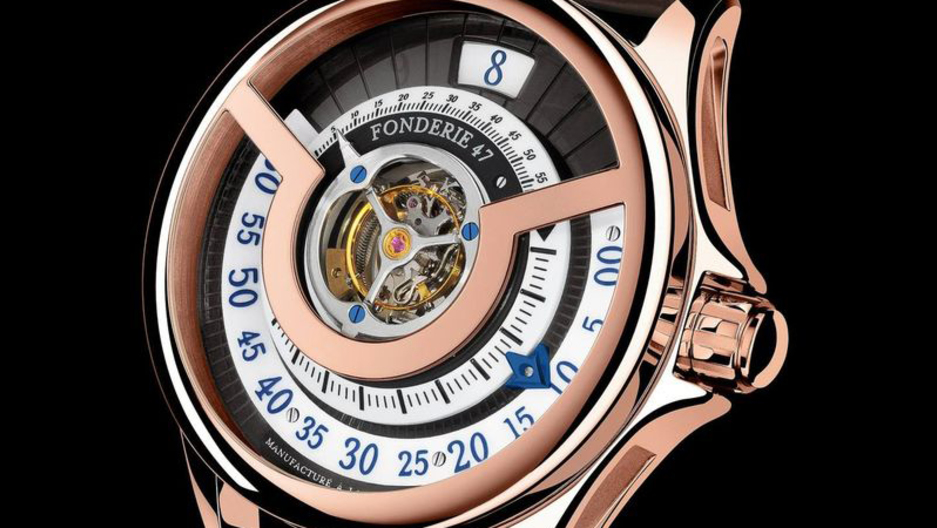 A watch from Fonderie 47.

After yet another massacre, America finds itself in a familiar situation — there’s shock, anger and mourning that’s followed by a persistent question: "What can be done?" The answer? Probably nothing.

What if guns and ammunition could be recycled into art, though? Peter Thum has been working to make that concept a reality for years.

In 2009, Thum co-founded Fonderie 47, which collects weapons and ammunitions from war-torn African nations, melts down the materials, and transforms them into necklaces, pens, cufflinks, rings and bracelets. He says he got into this business accidentally.

“I had started and sold a company to Starbucks called Ethos water, which took American bottled water consumers’ money and invested it in water projects around the world,” he says. “I was visiting our water projects in Africa and met young kids with guns. Many of them were smaller than the guns that they were carrying, and that was the inspiration for me to try to take the AK-47, which is the most famous symbol of conflict in Africa, and turn it into something that was beautiful and positive.”

Fonderie 47 has led this initiative in the Democratic Republic of Congo and Burundi. But Thum’s organization isn’t just reaping the profits from luxury accessories that have been built with weapons of war.

“We have used the sales of that business to fund a not-for-profit organization called Mines Advisory Group that works out of the UK,” he says. “It’s also a Nobel Peace Prize-winning organization that does small arms and light weapons destruction work in concert with governments in the United Nations.”

In the last five years, Thum estimates that Fonderie 47 has been able to destroy 55,000 assault rifles from the DRC and Burundi.

“Every piece that someone purchases funds the destruction of a specific number of weapons,” he says. “A very simple example of that would be when we sell one of our watches, which are limited edition mechanical swiss watches that are very rare — we’re only making 20 of them — the purchase of that watch funds the destruction of 1,000 assault rifles. Then, we provide the serial numbers of all the guns to the purchaser.”

After seeing the success of Fonderie 47, Thum founded Liberty United in 2013 with his wife, actress Cara Buono, with the hope of bringing this initiative to the US. The organization transforms illegal guns and ammunition confiscated by police into handcrafted jewelry and accessories. Additionally, every Liberty United purchase funds non-profit programs to protect at-risk children in violent American neighborhoods.

“These are children living in neighborhoods that have gun violence levels that are at the same level as the most dangerous countries in the Western Hemisphere,” he says. “Kids in the South Side of Chicago living in [the] Englewood [neighborhood] — the murder rates there are equal to those in places like Guatemala and some of the most dangerous places with gun violence in Mexico. I think it’s very hard for people to understand if they live in safe, suburban environment.”

Right now, the items sold by the two organizations are quite pricy — a specially crafted pen (what Thum calls a “limited edition fine writing instrument”) costs about $4,700 at the Fonderie 47 website. Similarly, a necklace with sapphires at the Liberty United website costs $3,895.

While Thum says his groups are hoping to roll out more affordable products, these high-end accessories appeal to wealthy donors who are proud to don a physical symbol of their philanthropic endeavors.

“The way that we built this was very intentional,” he says. “We wanted to make things that got attention — attention from people who are powerful, who, with the stroke of a pen, can change something significantly.”

As the nation grieves yet another mass shooting, Thum hopes that his products can serve as an everyday reminder of the issues at hand.

“We see news about gun violence every day. … It’s like wallpaper now,” he says. “The fact that people can see that and very quickly go back to their normal daily lives means the things that are happening right now in order to try to stop this and make change are not sufficient.”