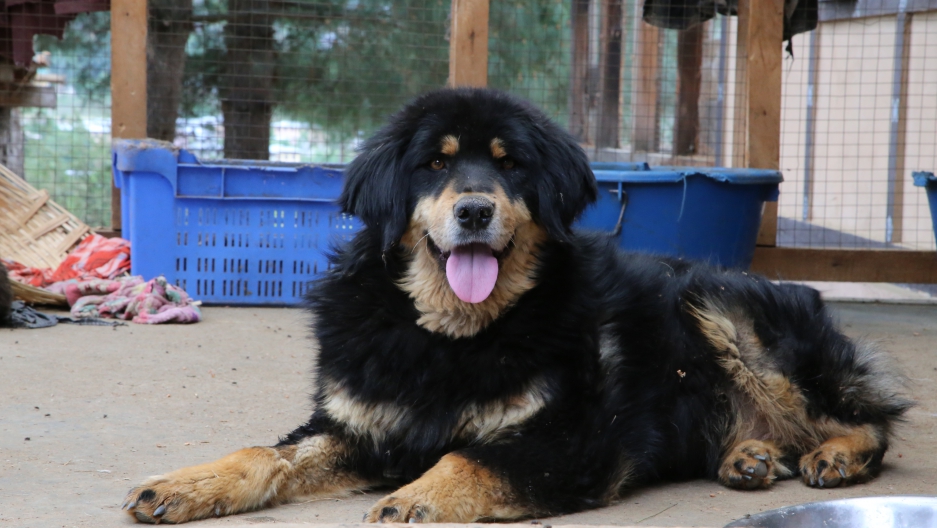 "Tim" is a street dog in Paro, Bhutan. He didn't always have such a gorgeous fur coat. He had terrible mange when a tourist rescued him. This gorgeous boy is pretty typical of the Bhutanese canine look.
Credit:

Bhutan is a small Buddhist kingdom tucked in the Himalayas and known best for its Gross National Happiness index. Among tourists, it's also known for its huge stray dog population.

"You notice it as soon as you get off the plane," says Twig Mowatt, an animal rights activist and editor of Bark Magazine. "They're along the highways. They're in front of every business, in front of the gas station, the police station, hanging out by people's houses. You're stepping over them on the sidewalks. They're everywhere."

But the stray dogs are precisely the reason Mowatt traveled to Bhutan. "Bhutanese people, who are largely Buddhist, believe that sentient beings should be cared for." And the Bhutanese do care for them though not in their homes.

"They're really community dogs. There isn't a lot of individual pet ownership the way we in the US would think of it," says Mowatt. "But there are dogs that are loyal to a certain territory. There might be seven or eight that live on a certain block and then the people who live in that area feed the dog. So they do care for the dogs. They don't want to hurt them. They believe that would be bad karma for them."

But by the mid-2000s, the stray dog population was getting out of control. Illegal meat markets were leaving scraps that attracted packs of dogs. Tourists, who are required to spend a minimum of $250 a day to be in the country, were finding them menacing.

"The population of dogs was growing and Bhutan was getting a lot of complaints about barking dogs at night that were keeping the tourists up," says Mowatt. 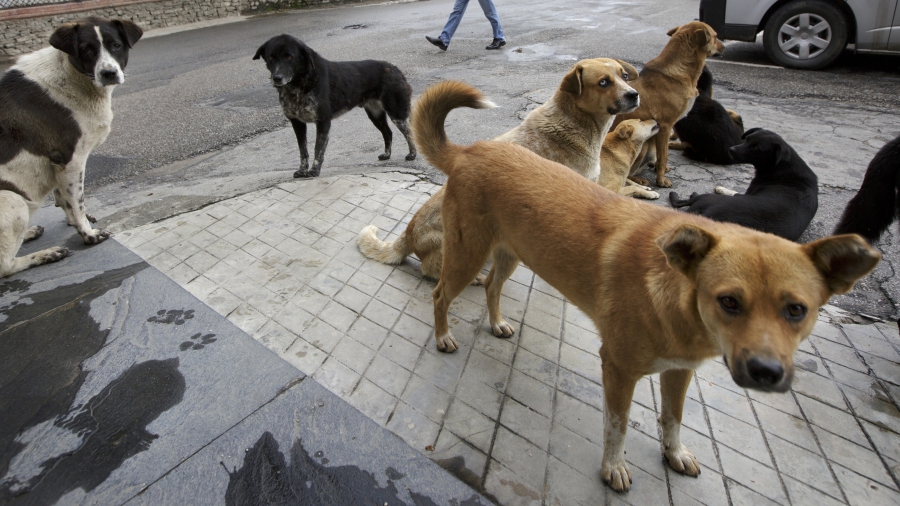 Street dogs lounge around in Bhutan's capital Thimpu as people walk by. As shown by the dog in the front, when dogs are vaccinated and sterilized, their ears are notched to mark them as treated.
Credit:

In 2008, Bhutan wanted to clean up the streets in advance of the coronation of a new king, so they reached out to Humane Society International for help.

"Bhutan had the idea that they wanted to put the dogs into big government pounds and just keep them sheltered that way," says Mowatt.

Humane Society International told Bhutan it was bad idea. But Bhutan went ahead. Thousands of dogs died. And Mowatt says the Bhutanese learned something else: No dogs leads to more rats.

"If you take away the dog population — they're very much a part of the ecosystem there — you're really messing with mother nature," Mowatt says. "So the rats had moved in to replace the dog void and they were just inundated with rats."

But Humane Society International persisted and suggested that Bhutan try something that was unprecedented: A nationwide spay/neuter and vaccine program.

"They said, 'Look, we know this is the only thing that will work. We know it's going to take a little time but in the long run this is the only effective solution.'" And the government agreed.

Humane Society International initiated the Catch-Neuter-Vaccinate-Release method. Dogs are released later the same day in the same location where they were captured. 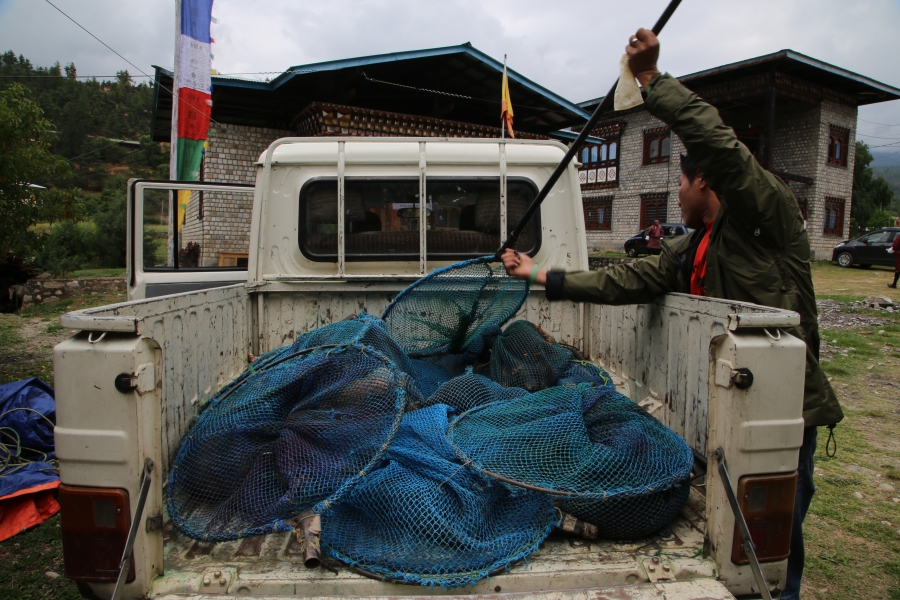 Having been humanely netted, ten dogs arrive at the clinic in Paro, Bhutan to be spayed, neutered, and vaccinated. Once they've recovered from surgery, they'll be returned to the same spot where they were caught.
Credit:

When the program started in 2009, Humane Society International estimated there were about 100,000 stray dogs in Bhutan, largely in the cities. Mowatt says it took a while to get things up and running.

"First, they didn't have enough vets so Indian members of Humane Society International sent in a vet team." Then they started creating a Bhutanese team, training vets, vet techs, even dog catchers.

"They use nets, which is very humane but it's not easy. These guys are real escape artists. They're biggish dogs. They're super smart. They work together."

The method of spaying and neutering they use is less invasive than the approach used in the United States. Mowatt says they're more like MASH units.

"The vets know how to make a tiny little incision and when the incision is small, everything else is easier and faster." That makes recovery time faster. They make a tiny incision and go in. "I liken it to a crochet hook. And they just grab the stuff. They can do a spay in under ten minutes and a neuter in under five. It's like watching an artist." 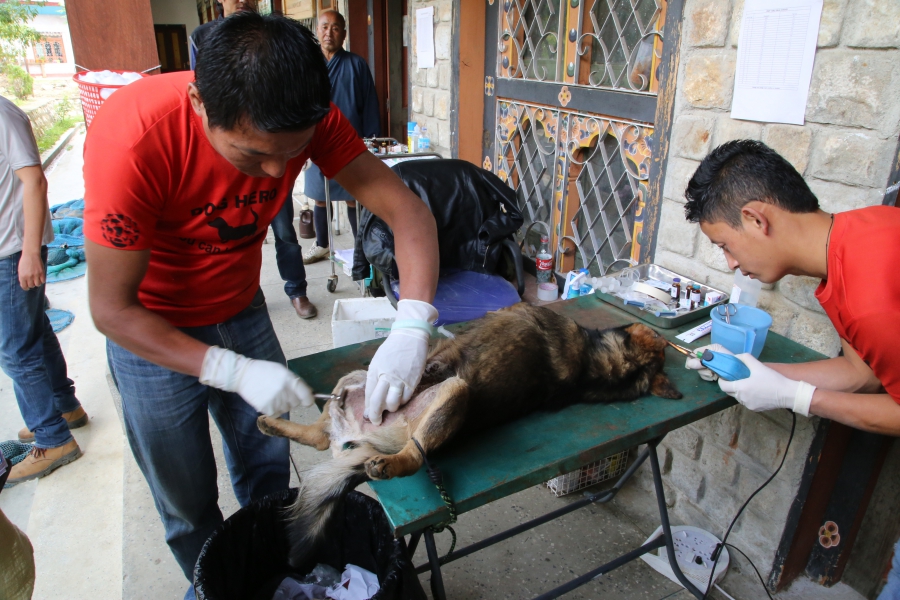 In pre-op at a clinic in the Bhutanese city of Paro, one vet tech shaves and sterilizes a male dog before surgery, while another cuts and cauterizes a notch in the left ear to identify the dog as having been neutered.

The stitches that are left are inside the dog so there's nothing to scratch, making the chance of post-surgical infection minimal.

Seven years on, the program has spayed or neutered and given rabies vaccine to 71,000 dogs in Bhutan. Twig Mowatt says there's a tell-tale sign.

"The way you can recognize a dog that's been spayed or neutered is they take a little triangular notch out of its left ear," she says. "And I have to say, everywhere I went, I would hike up to some monastery in the hills or trekking along the rice paddies and every single dog I saw had this triangular notch."

The spay and neuter program is ongoing and is now entirely run by the Bhutanese people, which was always the goal. 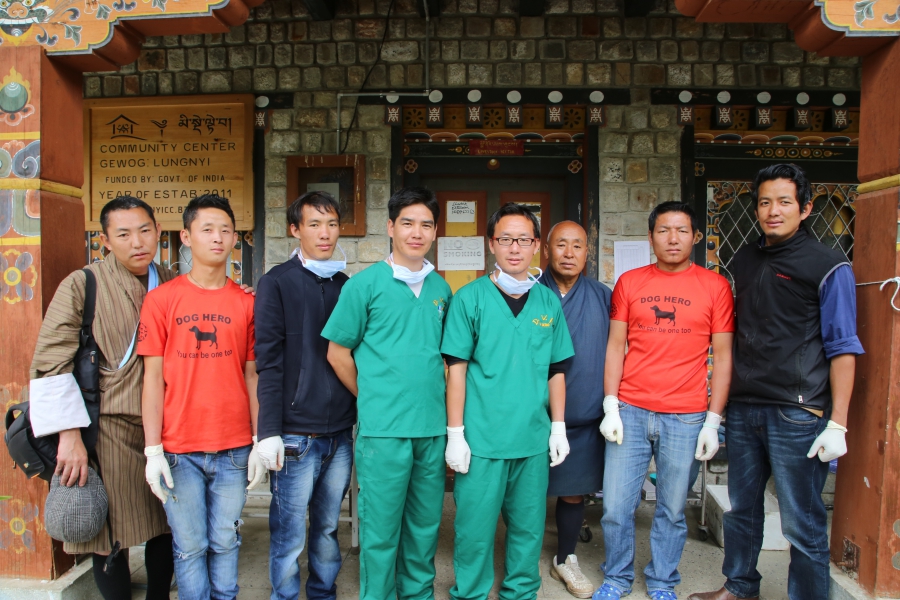 The dog population management team in Paro includes two vets (in green scrubs in front), vet techs, and dog catchers. At this point, most vets have personally done thousands of spay/neuter procedures.

Mowatt says Bhutan could be a model for other countries but it takes government buy-in.

"The fact that the government was fully on board was crucial, because it enabled Humane Society International to go in and do this complete program," she says. And they're not done yet.

"They're going to continue checking and following up, because the real shift in the size of the population of dogs isn't going to be noticeable for probably another five or six years," Mowatt continues. "The adult dogs who have been spayed or neutered are going to start dying of natural deaths. And at that point, they'll have all these statistics in place to show how effective this has been." 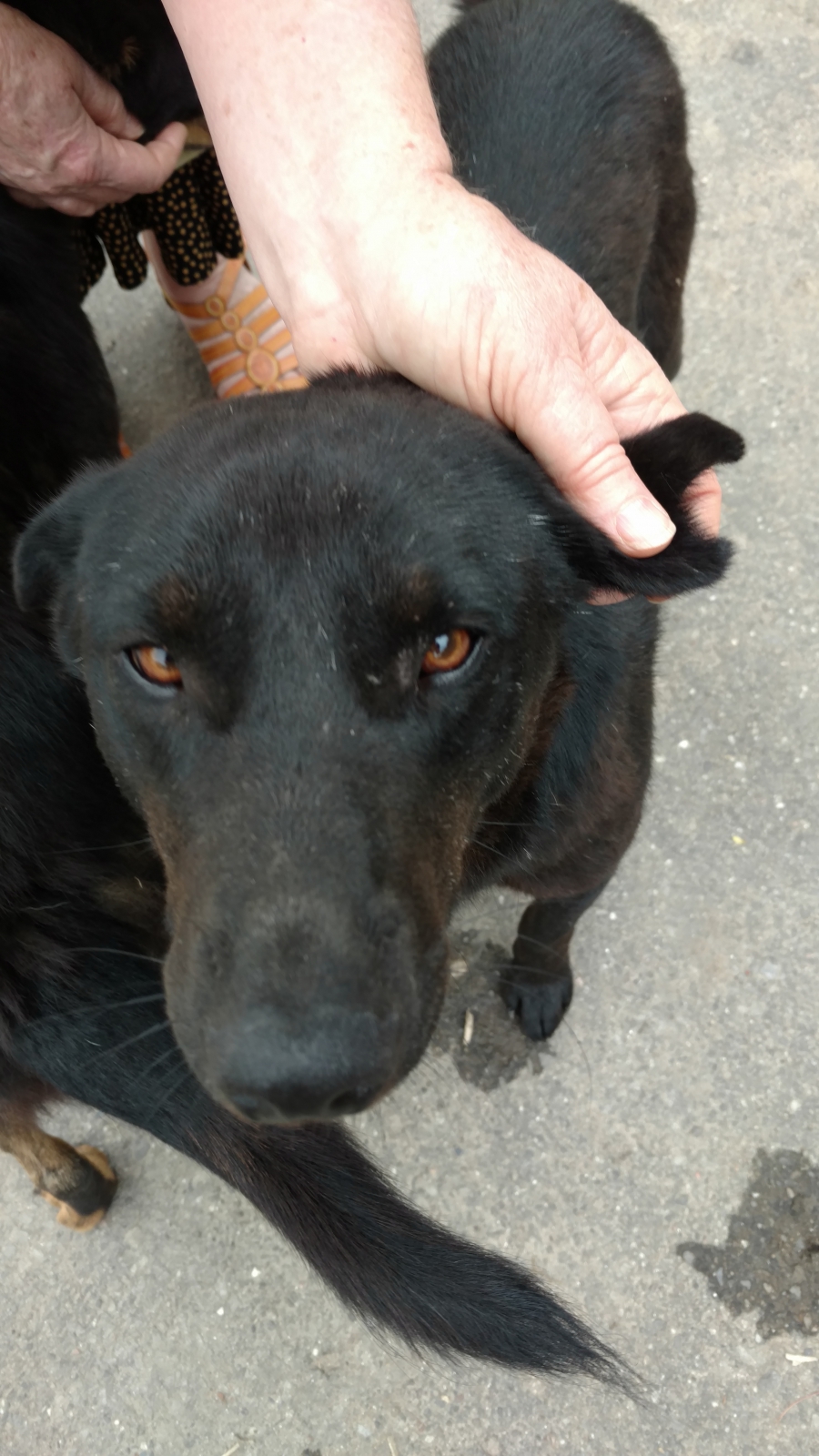 A stray dog in Paro, Bhutan, with the trademark triangle-shaped notch in his ear, the sign that he's been neutered.