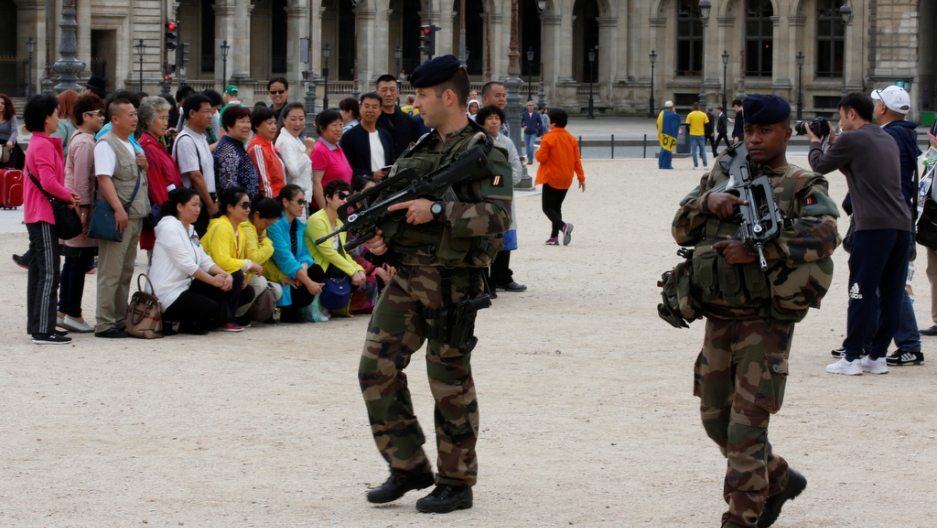 Chinese tourists pose for a group photo as French army soldiers patrol near the Louvre Museum's main entrance in Paris on June 13, 2016. The French capital is under high security during the UEFA 2016 European Championship.
Credit: Philippe Wojazer
Share

A fresh wave of Islamic State jihadists has left Syria and could commit attacks imminently in France and Belgium, Belgian police have been warned, according to media reports on Wednesday.

"Fighters travelling without passports left Syria about a week and a half ago in order to reach Europe by boat via Turkey and Greece," a memo sent to police and security services across Belgium said, according to La Derniere Heure newspaper.

The fighters were travelling armed and planning to carry out attacks in groups of two, the memo is reported to have said.

"Their action is imminent," the memo added, without giving the total of suspected attackers.

Belgium's OCAM national crisis centre in a statement did not deny the report, but said the information needed to be looked at further.

The information reported by the media "is non-contextualized and, as such, has not made a direct impact on the current level of threat" in Belgium.

Belgium's terror alert is currently at the second-highest level of three, which means a threat is possible and likely.

Belgium is still reeling from the Islamic State suicide bombings at Brussels airport and on the city's metro on March 22 which killed 32 people and wounded hundreds more.

They came five months after jihadists, many of them from Brussels, carried out gun and bombing attacks in Paris on November 13, killing 130 people and wounding hundreds more.

France, which is hosting the Euro 2016 football championships, is on maximum alert after an assailant previously convicted for jihadism killed a police officer and his partner on Monday.

The attacker told police negotiators before being gunned down that he had sworn loyalty to the Islamic State group three weeks earlier.