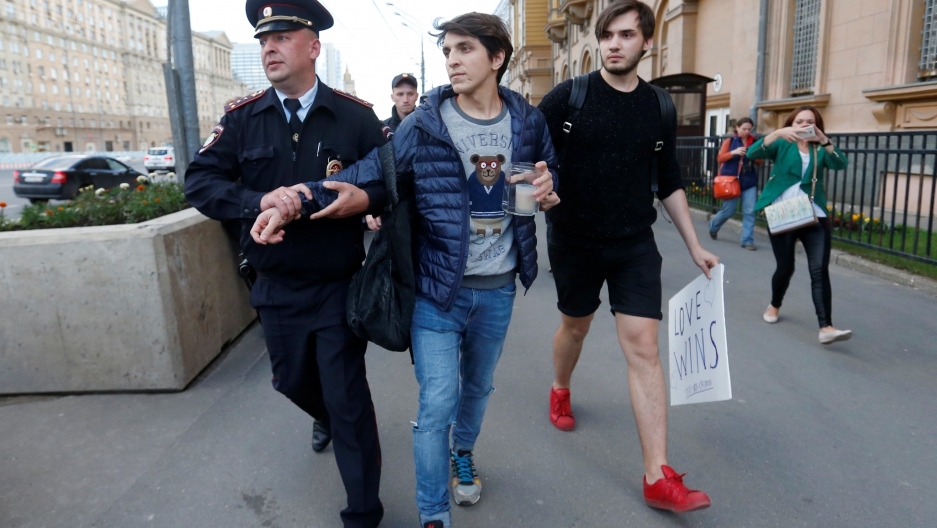 A Russian police officer detains a man as he intended to place a candle and a placard for the victims of the shooting at a gay nightclub in Orlando in front of the US Embassy in Moscow, June 13, 2016.

The world openly holds vigils for the Orlando shooting victims. In Moscow, you get arrested.

That's what happened yesterday to Islam Abdullabeckov and his boyfriend, Felix Glyukman.

They tried to leave flowers and a sign in front of the US Embassy in Moscow to commemorate the victims. Abdullabeckov and Glyukman were arrested and escorted away.

Later, from the back of a police car, Abdullabeckov posted a photo on Facebook with a caption that said, “This is completely surreal.”

Felix Glyukman and Islam Abdullabeckov being escorted in police vehicle after being detained by Russian authorities.

Although Abdullabeckov and Glyukman were arrested while attending the vigil honoring the Orlando victims, Putin’s official statement following the attack expressed that Russia shares the “pain and sorrow of those who lost their near and dear ones as a result of this barbaric crime.”

Masha Gessen, a Russian American writer and LGBT rights activist was surprised by Putin’s official statement. For the past four years, Putin has spurred a “relentless” anti-gay crackdown in Russia, Gessen said.

Russia’s anti-gay position is amplified by how some Russians have responded to the Orlando shooting on social media. “There’s a lot of rejoicing,” Gessen said.

One popular meme that has been drawing attention says, “50 faggots have been killed in a bar in the United States, fortunately no human beings were hurt.” 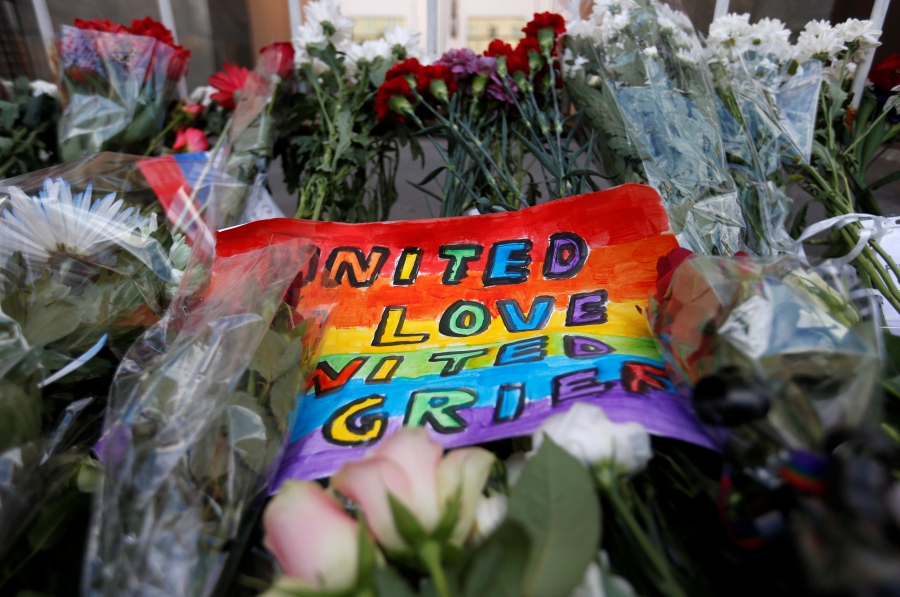 A placard and flowers for the victims of the shooting at a gay nightclub in Orlando are seen in front of the U.S. Embassy in Moscow, Russia, June 13, 2016.

It is difficult to be openly gay in Russia without being harassed by the law enforcement or by ordinary people. Gessen said that “violence is your constant companion if you are LGBT in Russia.”

Glyukman uploaded his coming out video on Youtube about a year ago and that’s how he met his boyfriend Islam Abdullabeckov, yet Glyukman still says that, "most gays can't be open in Russia.”

Whether Felix returns to the embassy to complete his tribute is still up in the air. His sign is still at the police station. Even after this legal run-in, Glyukman said he still believes in the message that he wrote.