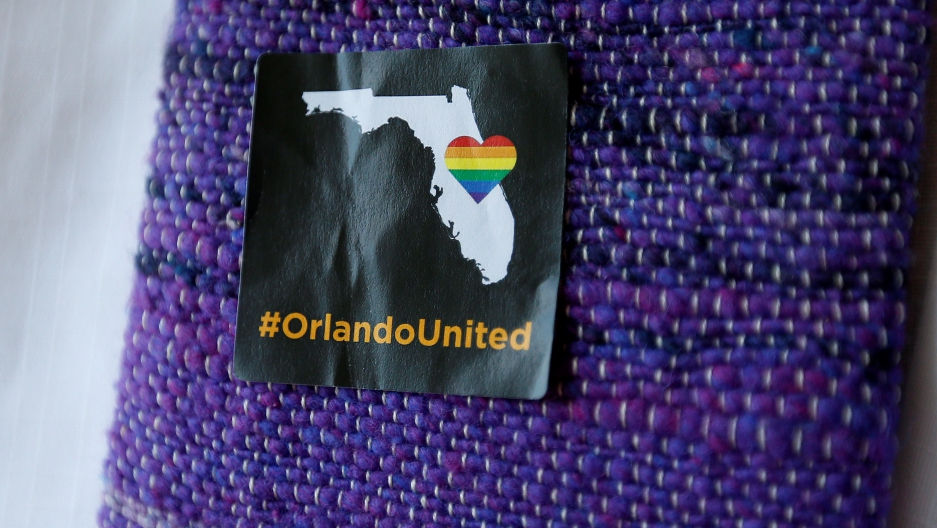 A #OrlandoUnited sticker is pictured on a clergyman's shawl before a prayer service at a memorial chapel in Orlando, Florida.

President Barack Obama has called the attack on the Pulse nightclub in Orlando both a hate crime and terrorism. But experts can't agree about whether there's a connection to Islam.

“I have to say,” says Georgia State University professor Mia Bloom, “I think that the president was very on point as far as saying that it doesn’t have to be one thing at the exclusion of others. It was definitely a hate crime, and it was an act of terrorism.”

Bloom has devoted her 27-year career to the study of terrorism and is the author of several books on the subject.

“The extent to which it might have either been directed or inspired by ISIS remains part of the mystery that is unfolding," she says.

Forty-nine people died and 53 were wounded by the time police took down the single suspected perpetrator, 29-year-old Omar Mateen, around 5 a.m. on Sunday. The nightmare at the popular gay club began around three hours earlier, just as the bartenders were taking last orders.

Mateen was a US citizen, born in the US to an Afghan family. He attended a mosque, but it’s not clear whether he was especially devout. It wasn’t until he was in the midst of the massacre in Orlando that Mateen dialed 911 and pledged allegiance to ISIS.

ISIS has claimed him as one of their own, although there is no evidence yet of any prior connection. An FBI investigation in 2014 found no substantial link.

What is becoming clear — from his ex-wife, and from past and present co-workers at G4S, the security firm where Mateen worked — is that he had a history of violence, homophobia, anti-Semitism, racism, and he was accused of mental instability.

Citing a report in the Daily Beast that Mateen was friends with at least one drag queen and had been comfortable hanging out with gay people in his teens, Bloom says, “I don’t know if part of the homophobia is an extreme interpretation of his own sexual repressedness. This is not someone who grew in Pakistan or Saudi Arabia. This is someone who grew up in the United States, watching TV, being exposed to things like ‘Will and Grace.’ This is not someone who’s never seen two gay people kiss before, especially if he’s hanging out at clubs with people who are cross-dressing.”

Bloom also notes that Mateen started casing gay clubs at least two weeks ago, when he tried to get on the VIP list at another club.

“So he’s basically had two weeks to make his pledge of allegiance [to ISIS] and he didn’t,” she says. “This attack looks to me a lot more like San Bernardino, where you have an individual who has pre-existing issues, and then the veneer of the ISIS affiliation provides either a seriousness or a street-cred, or even — in their perverse way of understanding it — a legitimacy to their actions.”

Presumptive GOP presidential nominee Donald Trump has said that President Obama needs to be more blunt in his characterization of the Orlando attack as an act of "radical Islamic terrorism." But Daveed Gartenstein-Ross says using this phrase is not particularly important.

"I do think it's important that one not disguise the motivation that the attacker had in this case, or to deny its connections to other strands of theological thought," Gartenstein-Ross says, adding that Trump has gone too far with this rhetoric.

At the same time, Gartenstein-Ross says the suspect "may be many other things as well, but he claimed this attack on behalf of ISIS. And he went after a set of victims that groups like ISIS and al-Qaeda have been known to target."

"Factually, you cannot get around the notion that [Mateen] is a radical Islamist," he says.

It seems irrelevant, however, for policy makers to be arguing about phrases like "radical Islamic terrorism" so soon after the Orlando massacre, says Shadi Hamid of the Brookings Institution.

Hamid says Trump's rhetoric "is actually a stand-in for something darker."

"This is a way of essentially castigating Muslims without explicitly doing it," says Hamid, the author of a new book called "Islamic Exceptionalism: How Islam is Shaping the World," which argues that US policy makers are not very good at talking about religion, especially in the Muslim world.

"Someone like President Obama, [a] self-styled technocrat who doesn't like to be aroused by the passions of politics, he has, I think, a lot of trouble taking these motivations seriously," Hamid says. "The way he's traditionally talked about ISIS ... is problematic, where he dismisses them oftentimes as a bunch of thugs and fanatics, as if he can't even bring himself to take them seriously as a global force."

For her part, presumptive Democratic presidential nominee Hillary Clinton appeared to shift her rhetoric on Monday. Clinton said she would not hesitate to describe the attack in Orlando as "radical Islamism," something she has been reluctant to do in her recent rhetoric.

Clinton went on to say that she will not, "demonize and demagogue," like Donald Trump, because "it's plain dangerous."